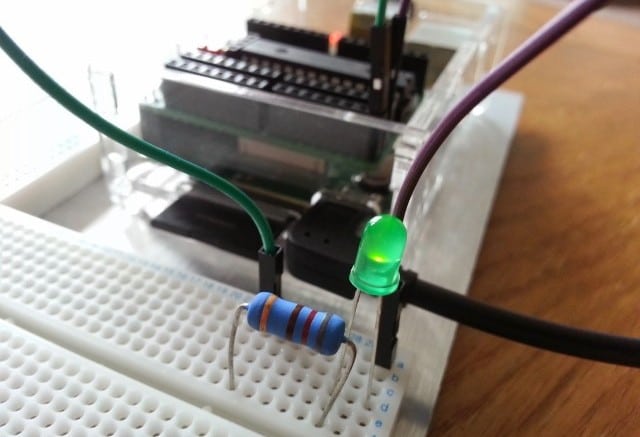 In Part 1 I showed you how I set up my Raspberry Pi and Ciseco Slice of Pi/O board, ready to continue my Hockey Scoreboard project.

Here in Part 2, I will show you a very simple script that I used to test one of the MCP23017 pins as an output, simply powering an LED. It should give you a little bit more confidence to proceed on to more complex code, it certainly confirmed a few things for me.

I’m deviating away from my Scoreboard project slightly, but it only seems fair to share the knowledge I have gained from others.


What you will need: (on top of the Pi and Slice of PiO)

Want to follow me exactly? Here’s the links for the specific items I use here:
Watch out, those resistors are quite large. Not sure why, but for the ohm rating I needed, they were cheapest at the time. 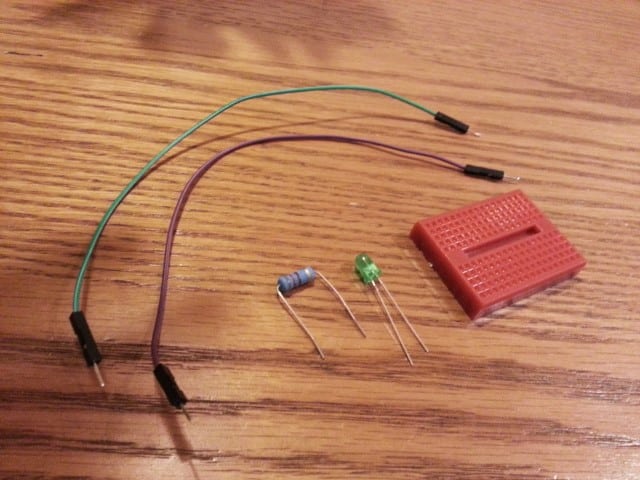 You’ll need these basics for the project

Firstly, turn off your Pi (you can use sudo halt from Terminal, or just do it the GUI way)

Secondly, let’s take a peep at the Slice of Pi/O from the top: 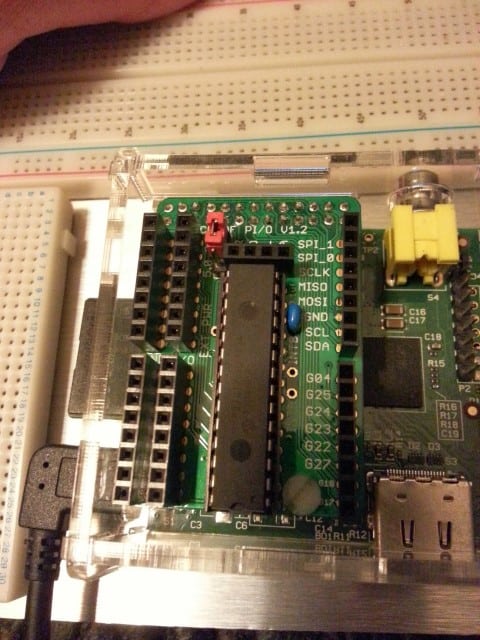 The Ciseco Slice of PiO

In the middle of the 4 pin headers you soldered in, you will see numbering. From the top down, you will see the first bank labelled as A0-A7, then the next as B7-B0 (Banks is the term used in the code so perhaps get used to that now. Bank 0, and Bank 1).

These are the 16 additional pins I talked about in Part 1 for input/output, of which one of these we will be using for the test. Just think of these as extra GPIO pins, although the code is different later on. (I’ll cover that in a bit)

Also notice hiding in the middle of the 2 Banks are the words ‘GND’ and ‘I/O’. This is telling you that the header sockets to the left are Ground, and the headers to the right are the I/O or ‘live’. The I/O is our GPIO input/output equivalent.

(NOTE: If your numbering looks different to mine, you may have an early board that had a print error)Now that you know what we will be playing with, let’s get going.


Wiring up the LED

1) Plug one end of a jumper cable into the top-right breadboard pin, and then the other end into the B0 I/O header socket (NOT the GND side, the I/O side): 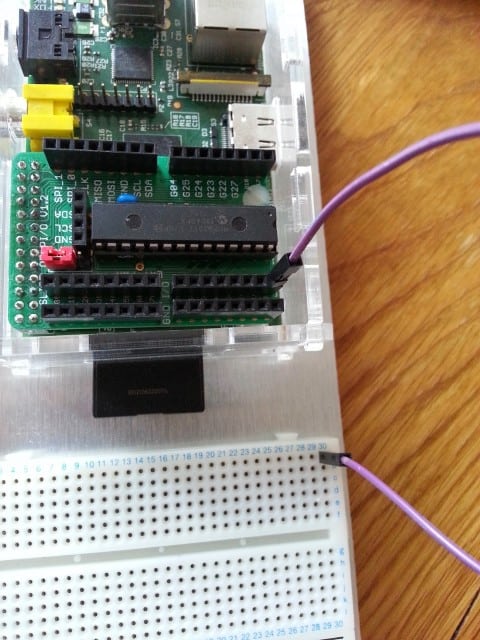 Make sure you use the right lane

2) Grab your LED. One leg of the LED will be longer. This is the positive (+) leg. This leg needs to be plugged in to the right-hand side of the breadboard, connecting to the jumper cable.
It is important that the LED is on separate lanes of the breadboard, otherwise it will just connect to itself: 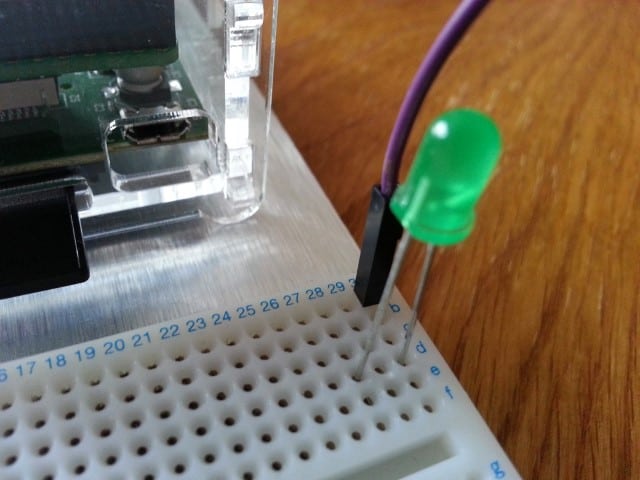 Long leg goes to the right

3) Now for the resistor. Bend the legs of the resistor so that it will fit into the breadboard. Enter one pin so that it connects to the (-) leg of the LED, and the other connecting to a new lane
(Note: Resistors can be installed in any direction) 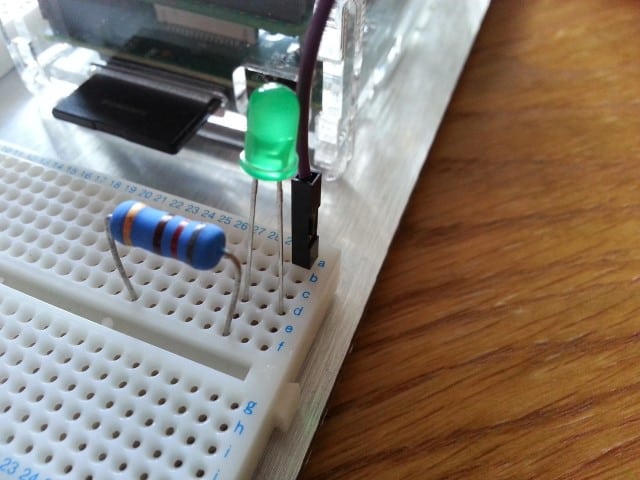 Either way round is fine

4) Grab your other jumper cable. Enter one side so that it connects to the resistor on the new lane, and the other side to the GND B0 header on the Slice of Pi/O (Opposite the other jumper): 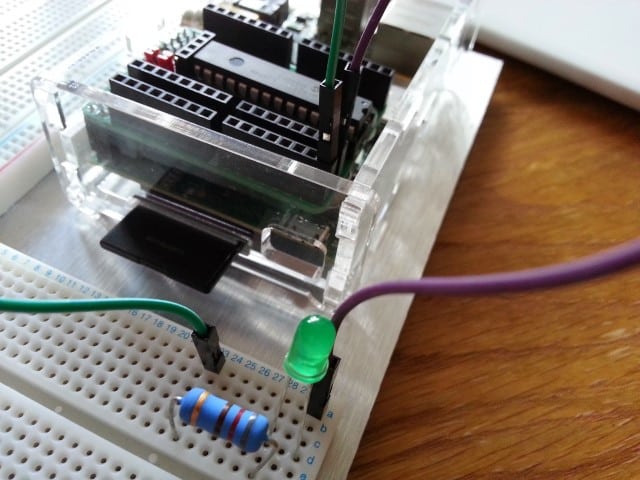 Attach the jumper to the opposite GND lane

Double-check that, and then move on to the next section.

Let’s not get ahead of ourselves – we need to understand what we’re playing with here. This is where I got caught out when trying to learn how to use this chip.

This is where understanding GPIO does you no favours. You get used to an almost logical sequence of pin numbering. With the I2C MCP23017, numbering is set out in a way that allows you to combine pin numbers to control more than one input/output pin at once, yet always totals to a different number to any other combination. (I’ll show you why this is important later)

Luckily, Bob is a top chap and quickly replied to my email begging for help. Let’s start by looking at the table Bob sent me via email:

Then look at the Ciseco board column, again, easy as we covered this already in this blog – these are the pin numbers on the Slice of Pi/O.

The Bank column tells us that the ‘A’ pins belong to bank 0, and the ‘B’ pins are part of bank 1. Still with me?

Ok now look at the Decimal column. Numbering starts at 1, and continues to double until it hits 128 on pin 8. It then starts at 1 again and does the same for pins 9-16. These are the values you will use in your Python code to ‘turn on’ each pin – and the odd numbering just means you can turn on any combination with a unique value. For example:

You might be wondering how the two different banks can have the same numbering sequence. Won’t they clash? No. When you look at my test code later on, you will see that to turn on a pin, you need both the bank number (0 or 1) AND the pin number. This way, it knows which bank to address, then the pin number to turn on.

Any issues with that, just leave a comment below and I’ll answer any specific questions.

To make life a bit easier, I have uploaded the test Python ‘py’ file to DropBox for you:

However, it’s worth going through the major parts of this file to help you understand what we have done. You will be amazed how much you go back and copy code from old projects.

I have added comments to the Python file to help you understand the structure, and tried the best I can below (in average man speak) to explain what each part does:

Once you have moved test Python file to your Pi, run the script in Terminal and you should see your LED light up like this: 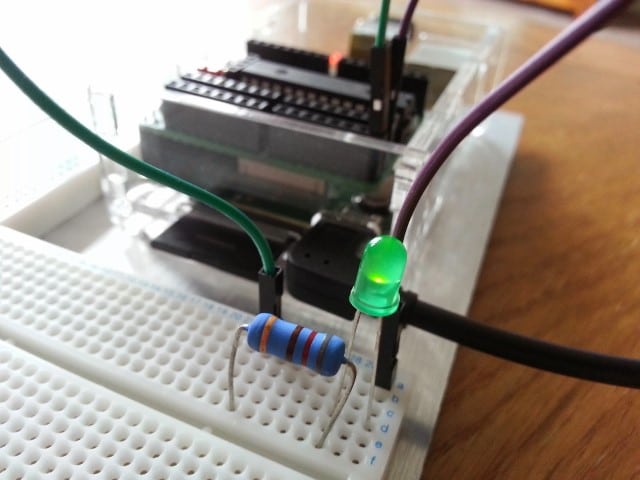 This proves that everything is soldered correctly, the chip is working, our code addresses the MCP23017 correctly and that you chose the right resistor for your LED!

That’s the testing complete, which means we’re ready to move back to the scoreboard project and start working out how to use all of these pins to our advantage.

In Part 3 I will create a prototype scoreboard using all 16 pins and some buttons. We’re short by about 24 pins still (if we don’t use the GPIO), so future blogs will cover how to daisy-chain additional MCP23017 chips.
If you have any questions, just leave a comment and subscribe.

How to Improve Your Raspberry Pi Prototyping with Additional Headers

Make Your Own Nokia 5110 Raspberry Pi Add-on Board