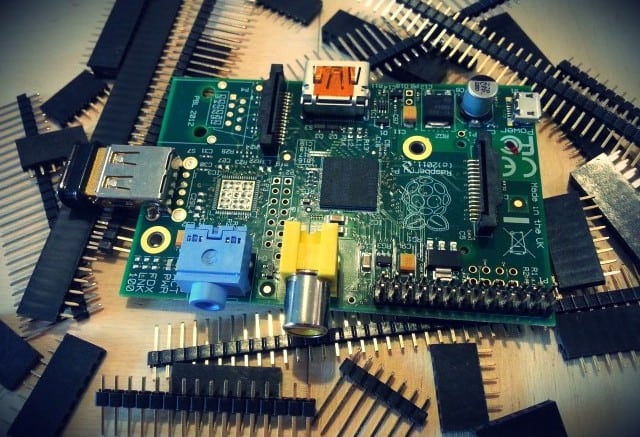 The Pi was outnumbered...

Most Raspberry Pi prototyping breakout boards come ‘Ikea style’ and require some form of assembly, with only a few around that are delivered pre-assembled. Usually this involves soldering headers and other supporting parts.

If you’ve ever wondered why you might want a ‘Stacking header‘ or a ‘40-pin strip‘, read on…

The only problem with adding more headers is that it can be quite expensive to buy individual pieces every time you undertake a new project. Luckily 4Tronix have put together a handy grab bag of mixed headers for you to get creative with, and should cover you for every situation.

The grab bag comes with the following headers: 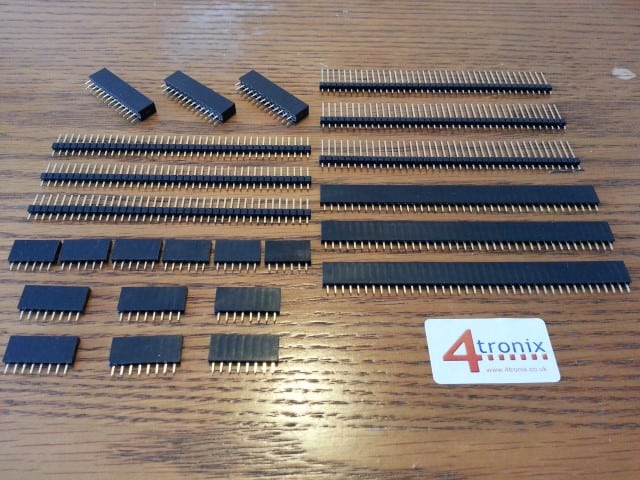 An army of headers from 4Tronix!

Now that’s a lot of headers, and should cover you for a good while. Considering some eBay auctions want £1 for just one of these 40-pin headers, I reckon it’s worth getting a bag of these for your maker box.

Whilst the grab bag comes with a lot of specific size headers, the larger 40-pin strips are intended to be cut down, giving you the flexibility to create your own custom size headers. There are 2 types of these in the bag:

These can be easily cut down to size to meet your requirements:


Pull out a pin where you want to cut: 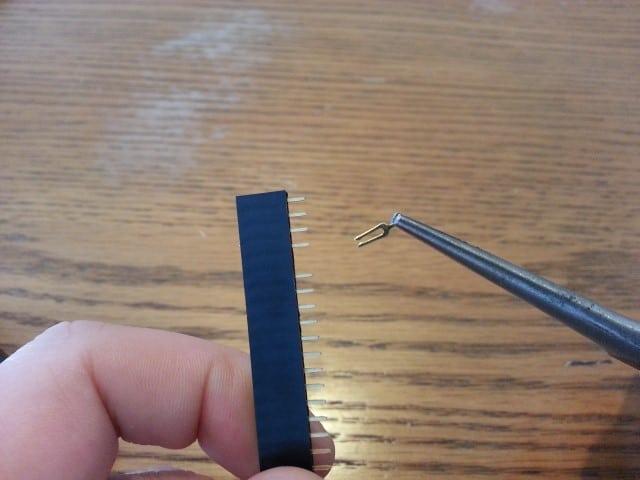 With a Stanley knife, make a groove where you want to cut, and then apply pressure: 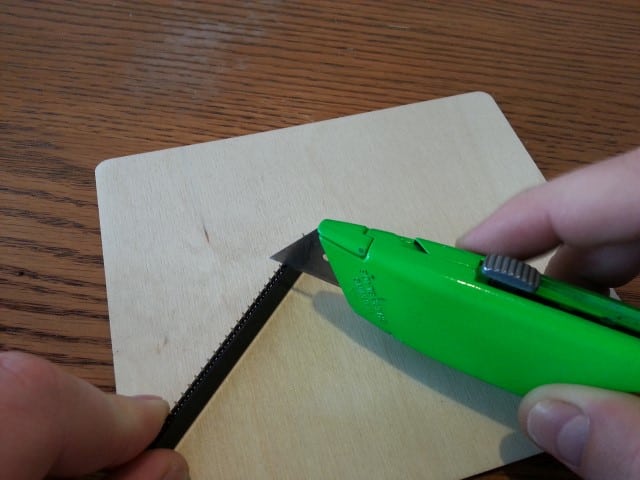 The cut off section will fly across the room at pace! 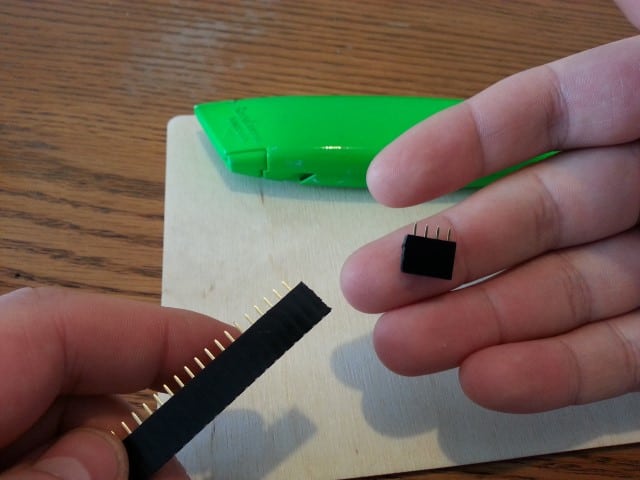 The method to cut these is similar to the female headers, but with less effort and waste:


With a Stanley knife, simply apply pressure to break the header: 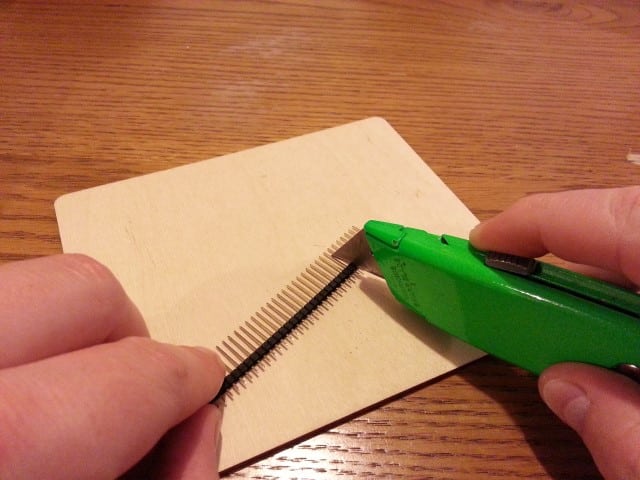 Again – it’ll go for a flight across the room: 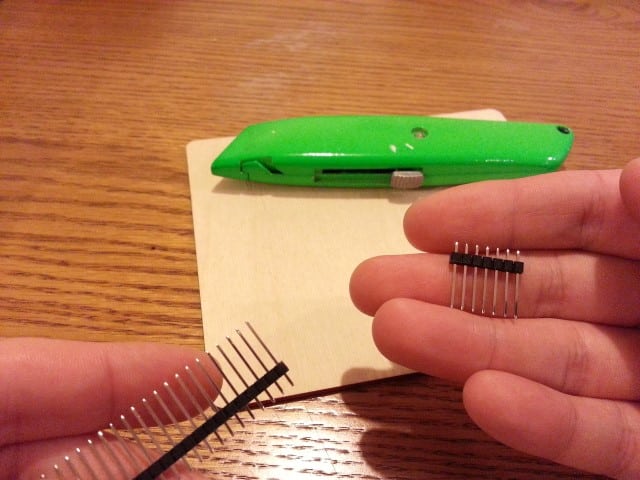 
Here are 5 examples that I came up with using the various boards I had at home. There are loads more ways you can use these depending on what your project needs – get creative!1. Hop-up your Humble Pi

The Humble Pi from Ciseco is a great breakout board, offering handy ‘lanes’ of 0.1″ connections for prototyping, as well as breaking out the GPIO. There are loads of options here:


Use the 40-pin male header to breakout the power lanes: 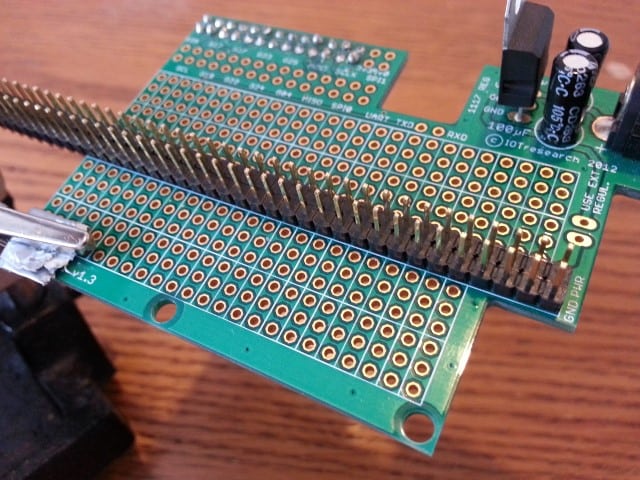 Use the pre-cut female headers to create lane headers for jumper wires: 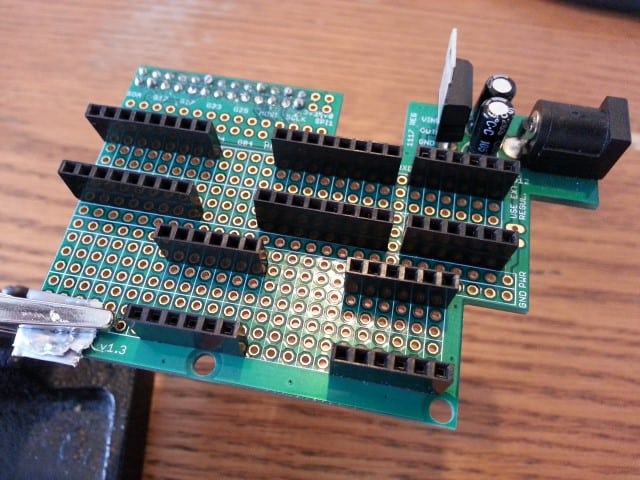 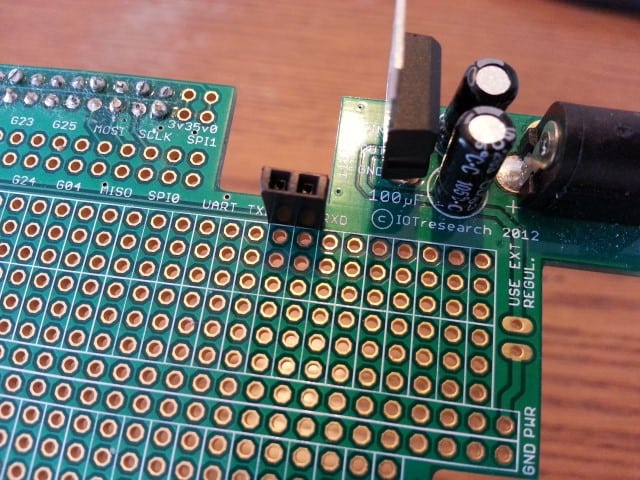 Cut down the male 40-pin header to give easy access to the GPIO: 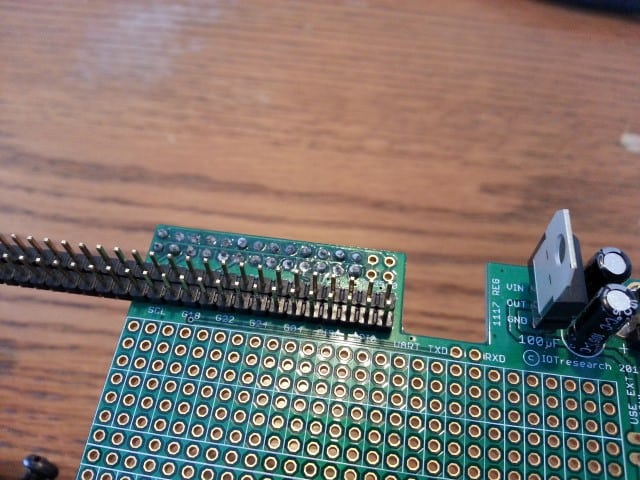 2. Pump Up Your ProtoLab

The ProtoLab from AlienSpec is one of the few boards that offers the user the option to add additional header connectors of their choice – giving specific breakout lanes of 0.1″ PCB holes to add them.

Cutting down one of the 40-pin female headers allowed me to really improve this board: 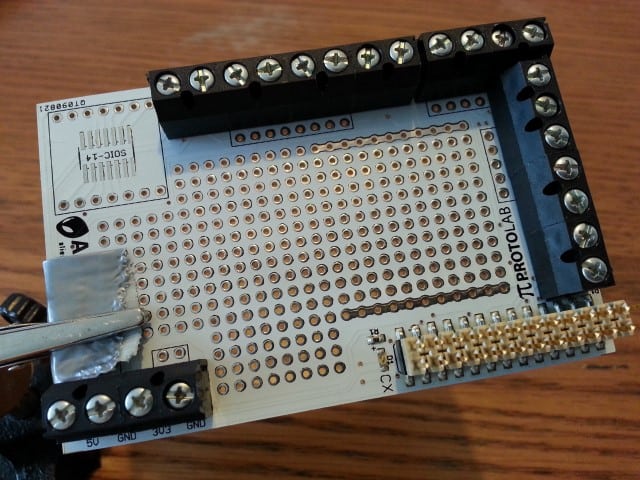 After…I’ve added 7 headers here, all made out of a single 40-pin female header strip from the grab bag. You could also use male headers: 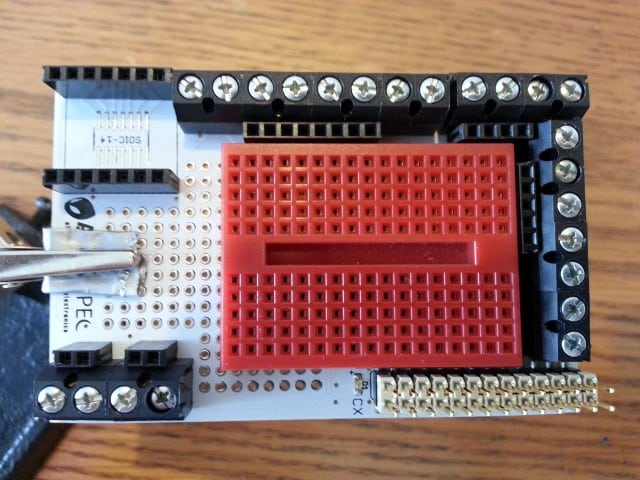 3. Add Pins to an LCD Module

I’ve used LCD modules in the past (with my PiRadio) and getting the wires in the right place can be challenging – I had to re-solder wires a number of times.

Adding a header to the module makes things a lot easier as you can use jumper wires instead of soldering, or you can push it straight into a breadboard:


Count the number of holes… 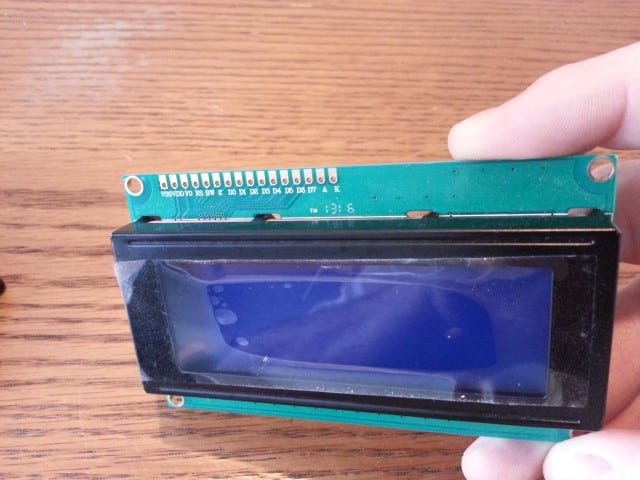 …then chop the male 40-pin header to size, and solder with the long legs to the rear: 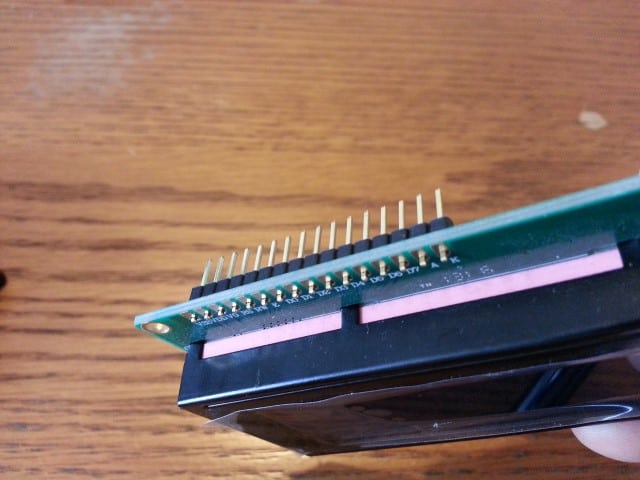 The Pi Crust from Pi-Supply is a great little breakout board, thanks mostly to it’s low-profile header. If you’ve run out of male jumper wires, you can add male headers to convert it:

Cut the 40-pin header to size… 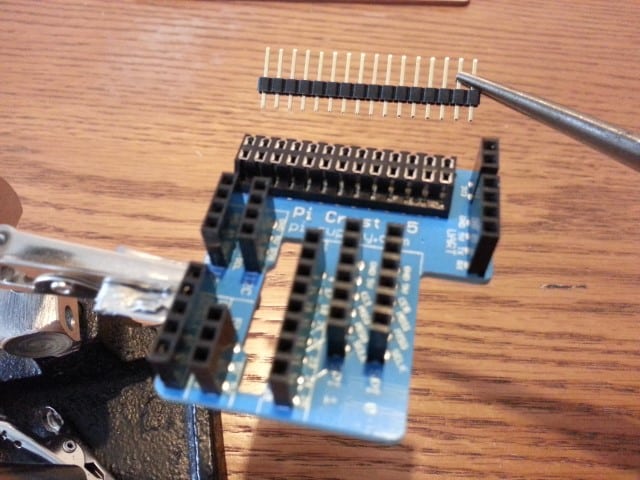 …and push in to position: (mine is a bit too long) 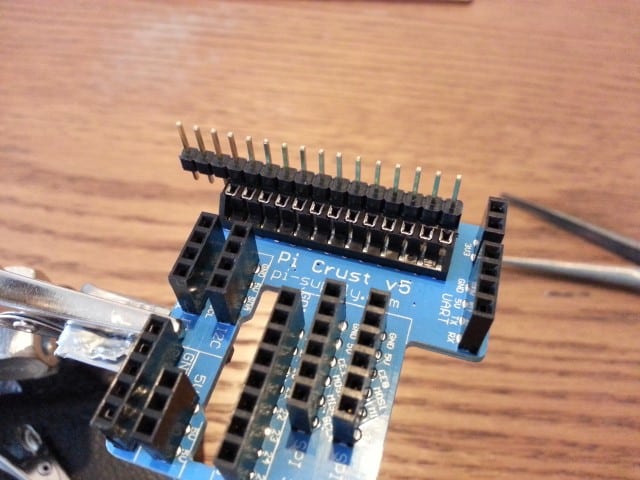 Breakout boards are fine, but almost all of us will initially start our projects on a breadboard. Once again, this little trick can be handy if you’re running low on female jumper wires:

Chop down a male 40-pin stacking header, and slide the plastic down so the legs are evenly spaced either side.
This will give you enough to push into the breadboard, and enough on top to attack a female jumper wire: 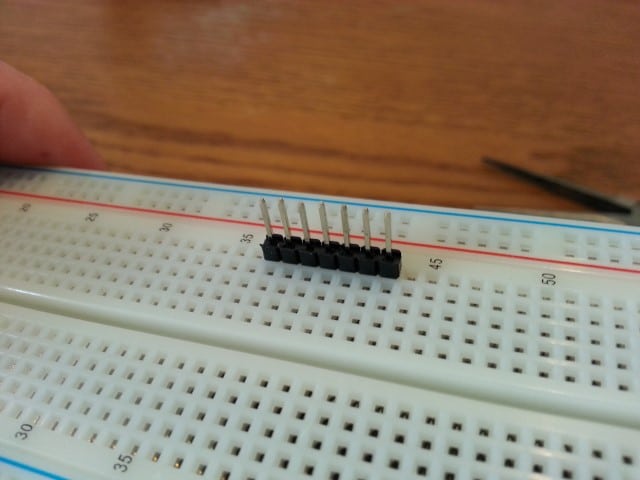 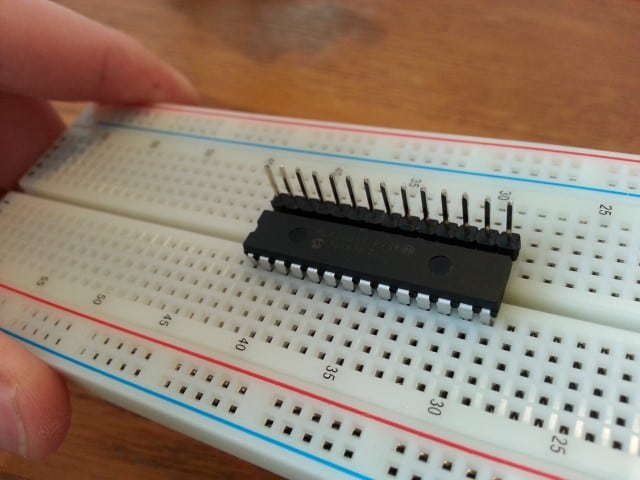 Hopefully that’s given you some inspiration for your next project, whether you’re using a breakout board or just a regular breadboard. I’ve certainly found it makes things a lot clearer, especially with chips in a breadboard when jumper wires can get a bit confusing.

Want one? Get a grab bag from 4Tronix on eBay.

The Wombat Board – Prototyping From Down Under