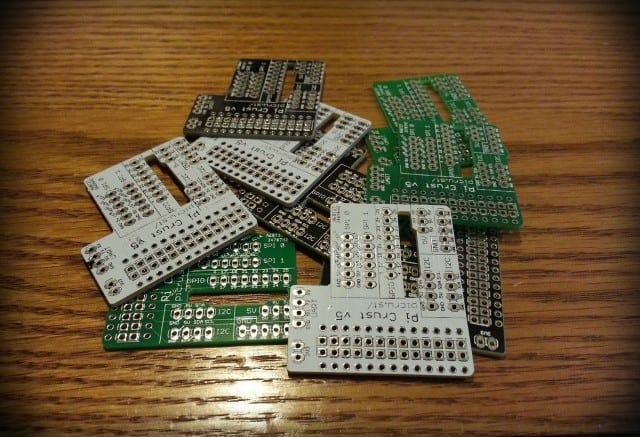 I have a few Pi Crust PCBs left...

It’s not been long since I ran the first Pi Crust PCB competition, but I’ve decided to give away some more as I have a few left and have hit my next Twitter milestone of 400 followers (I know this isn’t much compared to some!).

The Pi Crust is a great little Raspberry Pi breakout board that makes it a lot easier to prototype your projects, with plenty of spaced out and well labelled sections. The main feature is its low-profile seating on the board thanks to the interesting hirose GPIO connector used.

I originally got 30 limited-edition boards made up, and have a stash left over. These come in limited green, black and white.

The competition will be much the same as last time, if you win you get a Pi Crust PCB in the colour of your choice. You’ll need to get the connectors to go with it – this is intended as a ‘special’ PCB option for those buying a Pi Crust from Pi-Supply.com.

If you want to source the connectors yourself instead, check out picru.st for the list of parts. Note the main GPIO connector – it’s quite hard to get, but my Twitter friend @JarJarGeek has a stash that I believe he is offering for a small charge. The other headers can be purchased from stores such as 4-Tronix.

If you want to read my original Pi Crust assembly blog you can check it out here.

To enter the competition, simply complete the form below, which will populate a Google Docs form for me to randomly pick a winner. Re-tweet and tell your friends!

The competition closes on Wednesday 4th June at 20:00, after which I’ll notify the winners and announce on Twitter. One entry per human!

(Note: I will not sell, share, use or do any other nasty business with your data. I’ll pick a winners, use the email address to notify them, and then delete the spreadsheet. I may follow you on twitter if you add this information.)

Win a Pi Crust PCB for your Raspberry Pi!