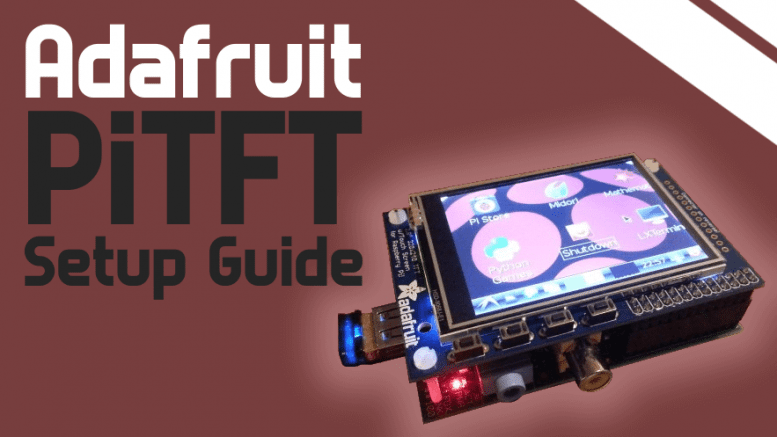 About 2 months ago I received my Adafruit PiTFT through the post, possibly the most excited I’ve ever been to see my postman. I also ordered the 4 tactile buttons to go with it, adding to my geeky buzz.

Foolishly I thought it would be a quick “Plug n’ Play” unit, expecting to get my console showing on the little 2.8″ screen in seconds. Not quite. I should have read the install guide before ordering!

You see, the PiTFT isn’t the easiest thing to get running. In fact, have a quick search on-line and you’ll see a mass of forum messages going back and forth trying to get certain parts working. Some can’t get their desktop to show up, some can’t get the buttons working, others struggle with the backlight control – and so on and so on. It’s a bit of a fiddly one to say the least!

After a few attempts and a lot of Googling, I’ve got mine working perfectly (update – “almost perfectly”) – so I’m here to show you exactly what I did, step by step, so that you don’t have to go through the same headache as me.

Start with a Fresh Raspbian Image

If you’ve been having trouble getting things working perfectly on your PiTFT, this is probably the most important part. I’m convinced that it’s best to start with a fresh image, but your experiences may differ.

One of my first attempts to get the PiTFT working, was on an existing Raspbian install – one I had run many projects on. I’m not sure why, but I couldn’t get the screen working on this – maybe I had done something to the settings somewhere. I had tried updating it first, but it still didn’t work.

Next, I tried the custom PiTFT image on the AdaFruit site. This would surely work, I told myself. Whilst it did get the screen running, I had problems with the backlight GPIO #252 being recognised. I couldn’t seem to fix this.

Eventually, I started with a clean image of Raspbian from the Raspberry Pi site. This, plus my other steps, worked for me – so if you can, do this first.

I’m not sure if it makes any difference, but with my fresh Raspbian image I took the following actions in the raspi-config screen:

Despite it always being recommended, I didn’t update the raspi-config tool or the Pi itself.

Here’s what I did to set the PiTFT up on my fresh Raspbian image. What you’re doing here is installing a new ‘kernel’ (nothing to do with grain). You need internet access to download the files you need, so sort out an Ethernet or WiFi connection first.

Head to a Terminal session either on screen or using something like SSH, and enter the usual ‘cd’ command to make sure you’re in the main directory.

Then run these one by one, to download the Kernel files:

Now that you’ve downloaded the files you need, run this command to install the kernel:

This might take a minute or two, be patient with it.

You’re following this guide, which means by now you should be using the latest image of Raspbian.

With recent versions of Raspbian you need to turn off the accelerated X framebuffer when using the PiTFT. To do this we move that file to your home directory, which means it has been removed but can still be put back later if needed. We use ‘mv’ to move files here – use the command below:

Now we need to reboot, so run the usual reboot command:

You won’t see anything on screen yet, don’t panic.

Run the following commands to install the screen driver:

That last command will start ‘X’ on your PiTFT – now I didn’t know this before, but ‘X’ means the GUI…the desktop view for Raspbian. You learn something every day huh?

We’re not finished yet, so calm down, and press ‘Ctrl – C’ on your keyboard to go back to the Terminal view. If you’ve SSH’d in, you don’t have to do this as you will still have terminal view.

Setting the Modules to Auto-load

Open up the modules list with the following command:

Add these lines underneath the line already in there:

Once you’ve added them, hit ‘Ctrl + x’ to save (press ‘Y’ at the prompt to save the file with the same name).

Open up the configuration file with this command:

Most people will want to start the Raspberry Pi Desktop view regularly, but unfortunately the PiTFT requires a separate command before ‘startx’ (‘FRAMEBUFFER=/dev/fb1 startx’)

Luckily there’s a way around this. Open up your profile file:

…and add this line above the other non-# lines:

You can now just use ‘startx’ to start the desktop.

Don’t be fooled – you may think you’re done, but there’s a few things to tweak yet. For example, if you leave that PiTFT on for 30 minutes, the screen will go blank and you’ll be wondering what went wrong. Also, you don’t know which GPIO to use for those switches – and did I mention font size on the screen?

Let’s sort these things out now.

As I mentioned above, the default setting is for the screen to turn off after 30 minutes, and I couldn’t find a way to bring it back over SSH – very annoying. Use the following command to open the settings file:

Then set ‘BLANK_TIME’ to ‘0’ to stop the screen from timing out.

I also set POWERDOWN_TIME to ‘0’ as it seemed like a good idea as the description made it seem like it shut down ‘something’ after 60 minutes (30+30). You may not need to do this, but I did. (UPDATE – try #’ing that POWERDOWN line out if you still experience time-outs)

If you want to go straight to the terminal (my preference), follow these steps…

First, tell the Pi to use the TFT Framebuffer instead of the HDMI one. Open up the cmdline file:

There will already be a long line of text in this file – we’re going to change it. Near the end of the text you’ll find ‘rootwait’ – directly after this enter the following text:

Exit and save the usual way, and you’re done.

The last step will get Terminal running on boot, but one of the many guides I used suggested changing the text size by doing the following…

Run the following command to get into console setup – it’s a pretty blue screen:

Have a play if you don’t like that font, there are a load to choose from.

The PiTFT comes with some built in options for button control (backlight and shut down), but I never really understood why as it’s easy to start your own Python script on boot to control whatever you want – much more fun!

From left to right (buttons on the PiTFT), the GPIO numbering (GPIO.BCM) is as follows:

The GPIO pins feeding these buttons are set high by default, so to trigger them you have to tell your script to look for ‘FALSE’…let me show you my script – copy it, tweak it, freak it – go for it! I’d love to hear what you’ve done with your PiTFT buttons.

I used a few different guides to finally get my PiTFT working. I’m not confident that one single guide has the correct way of doing things, but here they are anyway – they contain extra information such as calibrating your touchscreen and more:

As always, if you need any help just comment below.