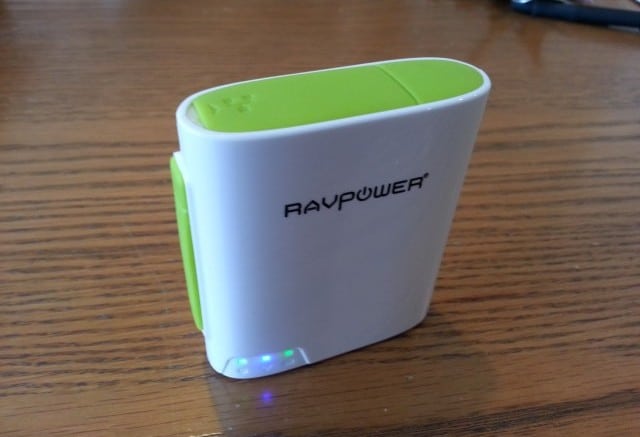 If you visit my blog regularly, you‘ll know that I set up a ‘show & tell‘ table at the recent Southend-on-Sea Raspberry Jam along with some of my recent Pi projects.

One thing I found particularly difficult was being able to access each of them via SSH without my usual router that I‘d have at home, let alone the lack of internet access (access was available but naturally very stretched at an event like this).

I’ve found a very handy pocket sized solution to my problem – the FileHub from RAVPower. In a nutshell it’s a portable router that allows you to connect your devices on the move – but it also offers a load of other features that will help make Raspberry Jams a hassle-free experience.

Jammed at the Jam

I started my hunt for a more transportable network solution after getting in a pickle at the Southend Raspberry Jam. With 5 Pi’s, a hard drive and screen to plug in, adding a traditional router to this just meant more cables, more plugs and less space on my table for my projects (my table was packed!).

It was also tricky giving internet to some Pi’s using my phone, and just connecting other Pi’s to my router. Messy – I wanted a single network to do it all, and something a lot smaller that didn‘t need a plug.

Google Is Your Friend

I ran a search on Google and quickly found that portable routers were readily available and nothing new – guess I was a bit late to the party! As usual I ended up on Amazon with a page of options, and chose the FileHub as I had used their products before and had so far been impressed, and it also offered a more modern look and seemed to pack more features (although I wasn‘t totally sure what to do with all of them!).

Here is what arrived a couple of days later: 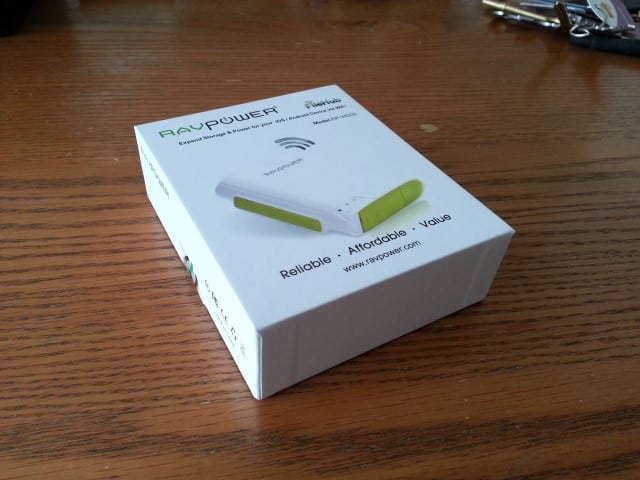 The box is surprisingly small 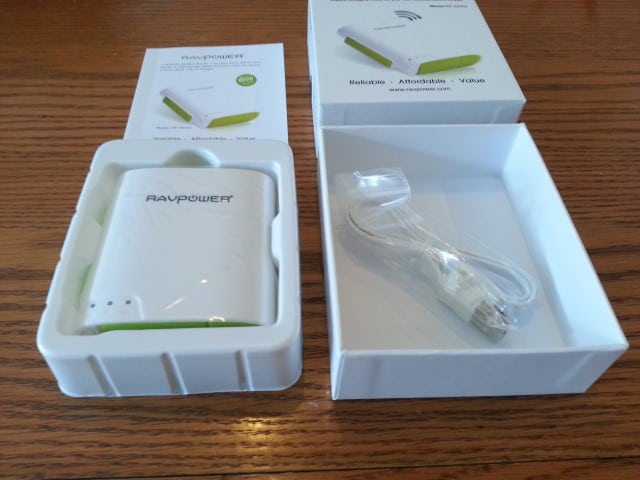 Everything neatly organised inside the box

I was at first a bit concerned with the size, it seemed far too small a box to have a router inside – I thought I might had ordered the wrong thing? It would have helped if I had taken notice of the size specification on the product page (whoops)! Still, I didnt expect such a neat package for something offering this much functionality.

The FileHub fits in the hand and pocket, and comes up a similar size to the Raspberry Pi. This is exactly what I wanted, something I could leave in my pocket and forget about: 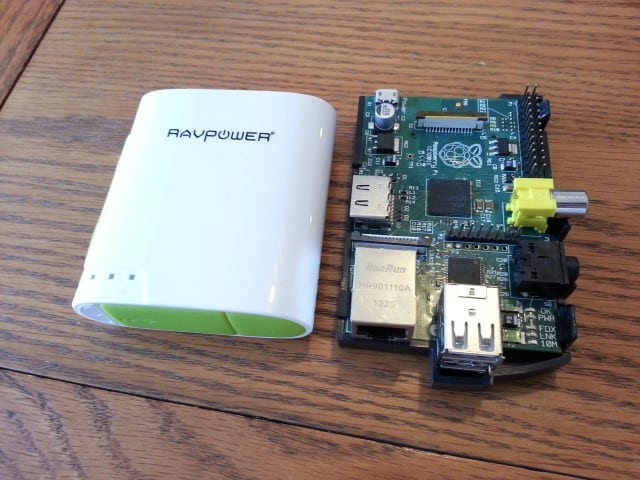 Enough obsessing over the size, let’s see what this thing does. Here’s a list…everyone loves a list:

Setting up the FileHub is easy thanks to the guided process. All you need to do is connect to the FileHub network using the default password on the back of it, then tap in the IP address on the back of the device into your browser. The FileHub then takes you through the various setup options including password changes and internet access setup.

I used the smartphone app for this part, which directs you to the browser anyway: 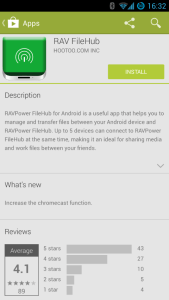 FileHub app on the Play Store 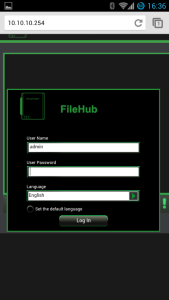 The router is obviously the main thing we’re after here. For those wondering – it works just like a normal router, but small enough to fit in your mouth (not advised!). Just like your home router, the FileHub has its IP and password details on the rear to get started with, which can be changed once you’re set up.

Nothing seems to ever work first time in this scene, so I added the SSID and password details to each of my Pi’s wpa_supplicant file’s (and connected my new PcDuino too!), and turned them all on, expecting to learn that i‘ve made some kind of error. 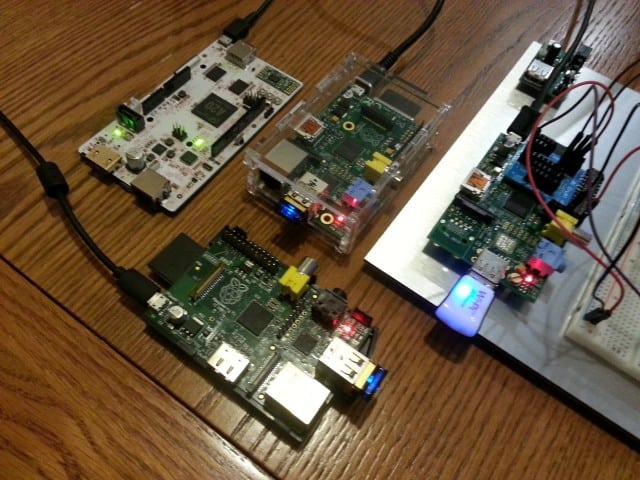 All the devices came out for the test, even the PcDuino!

To my surprise each Pi connected to the network as they normally would. I connected my Slatebook and Android phone to the FileHub’s network too, and used the handy ‘Fing‘ app to grab the IP address of each Pi. With a bit of pride and probably a even more shock, each Pi was showing on the network. Maybe I‘m getting good at this finally? 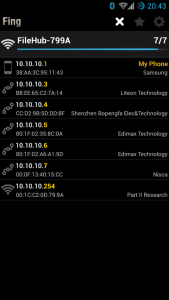 I could now SSH in and out of my Pis on demand, but obviously had no internet connection to offer them. No internet…what a scary thought.

Connect to the World

Luckily the FileHub allows you to add an internet connection to it in a couple of ways. The ethernet port is the obvious one here, you could simply plug it in to an existing router (this can‘t be used to connect a device such as a Pi – WiFi only for that). 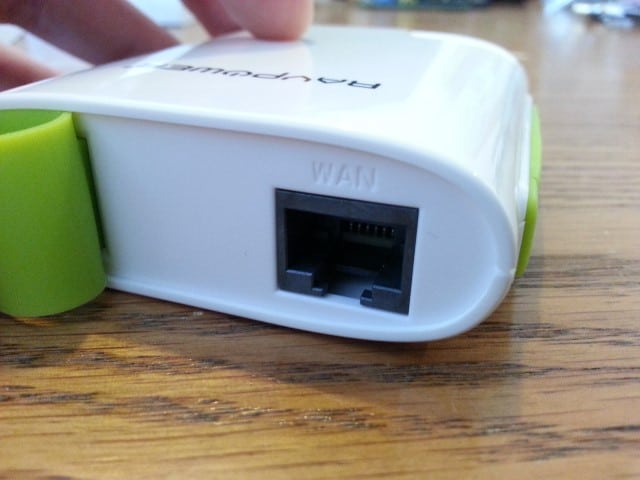 The ethernet port is for WAN only, not for connecting devices

The tidier option, and very relevant for the Raspberry Jams, is the option to connect to an existing wifi network and share this on to the devices connected to the FileHub.

This is perfect for connecting to the WiFi offered by the Raspberry Jam…and if that network is struggling, I also have the option of using my smartphone as an access point and connecting to that instead. This can all be done via the app as well: 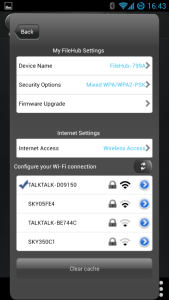 I was only really interested in the main router function initially – that‘s why I bought it –  but the other features have turned out to be quite handy.

The USB port allows me to connect my hard drive and serve files such as my films and various files. Handy for sharing scripts over FTP between Pis.

Then there’s the micro-SD card slot that offers similar functionality but for micro-SD cards, handy for things like camera photos etc. 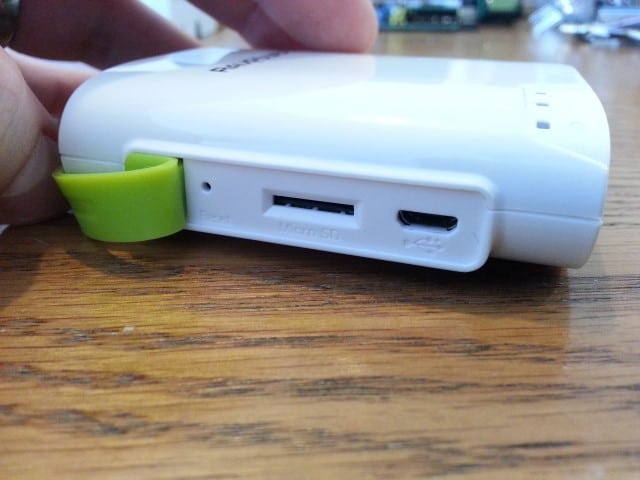 One feature I didnt realise was available when purchasing, is the Android App for the FileHub. It gives you a quick and easy way to manage the network and view/manage files. OK you can probably do that using the IP of the router anyway, but the app is a handy tool.

It’s easy to forget that this is essentially a power bank as well, holding 6000mAh of the good stuff. Whilst using the network (or not) you can connect any USB device to power or charge – this could be your phone or even a Raspberry Pi. I ran a Pi off of the USB connection for a while and it worked perfectly: 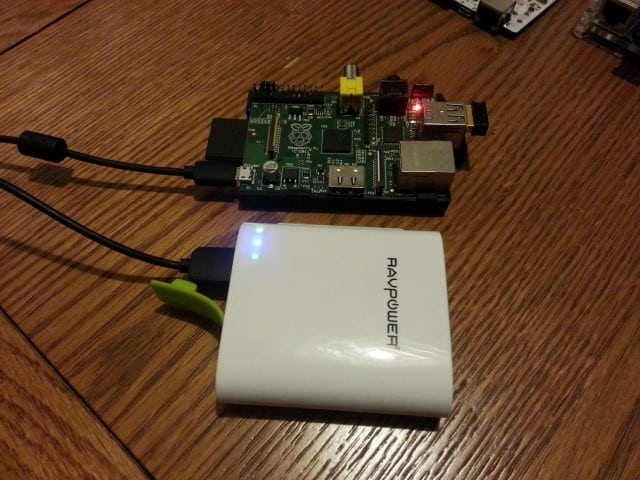 I ran a Pi off of the USB power bank slot

Things I liked
I’m really impressed by the FileHub and it certainly fits my needs perfectly for Raspberry Jam networking.

The setup is easy and guided, wireless connections didn‘t drop at all in my tests – and hey…it really does fit in your pocket! The app is a really good idea and compliments apps like ‘Fing’ really well. USB and SD connections remove the need for adapters, really helping the mobile “less luggage” aim.

Lastly, the fact that it‘s a decent-sized power bank as well is really cool. I‘m going to put it to the ultimate test this weekend when I attend the Cambridge CamJam.

Things I would change
I’d love a slightly beefier battery to ensure I could get through a full day or even power a Pi for the day whilst the router is running – but I guess there are limitations when you want to keep the size dimensions down.

I‘d also have liked at least one ethernet port to connect a device (the one currently on the FileHub is to connect to a WAN only), but size trumps this one as well I guess. The colour battery indicator is ok, but something more accurate would be better.

Want one? Get a RAVPower FileHub at Amazon.

How To Set Up WiFi on the Raspberry Pi