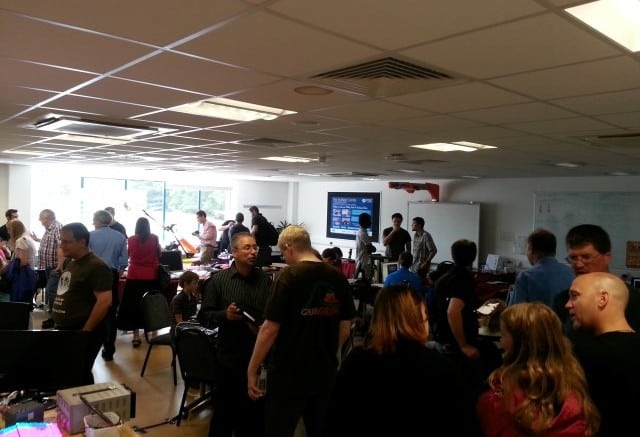 The main room got busy in between talks

Yesterday I attended my first ever ‘Raspberry Jam’ in my hometown – the Southend-on-Sea Raspberry Pi Jam!

I had seen a lot of reviews, blogs and pictures about other Raspberry Jams such as the ever popular Cambridge “CamJam”, but until now had always had other commitments to attend to.

If you’re not sure what a Raspberry Jam is – well – it’s simply an event that brings together like-minded Raspberry Pi people to show off their projects, learn something new, sell a few bits or generally just have a look around. Some Jams are well established and see attendance hitting the 100’s, whilst others are more cosy affairs.

Yesterday was Southend’s third Raspberry Jam, hosted by the nice chaps at SoSLUG – The Southend Linux User Group. They were kind enough to invite me down and even give me a table to show people some of my projects.

Read on to hear more, and see some of the fantastic projects on show…

Around 8am after a pretty sleepless night with my newborn, I woke up just a tad excited at the thought of attending my first Raspberry Jam. I had no idea what to expect, how many people would come, if I had everything I needed and even if people would be interested in what I had to show them.

I arrived to find a handful of what I could only assume were the SoSLUG regulars, who gave me a very friendly “good morning” and quickly showed me to a table. My very own Average Man Raspberry Jam table – a proud moment for my little blog!

After 30 minutes of un-knotting cables, head scratching with networks and getting to know my ‘table neighbours’, I was all set up and ready to go, and people started to pour in.

About an hour in there was a surprise appearance by Carrie Anne Philbin who wrote “Adventures In Raspberry Pi” – a very popular book containing many Pi projects to try (I also think it’s up for an award at present? If you’re reading this Carrie…do let us know in the comments section). Unfortunately I was at another stand when Carrie came round, so missed my chance to say hello. Maybe next time…

For my table, I had decided to bring all of my completed projects, which included my Temperature Monitor/MyPiFi game, my Internet PiRadio, my RaspBMC Media Centre playing Avatar, and a PiTFT playing Avatar.

I had a packed out little table, but I figured that made it interesting: 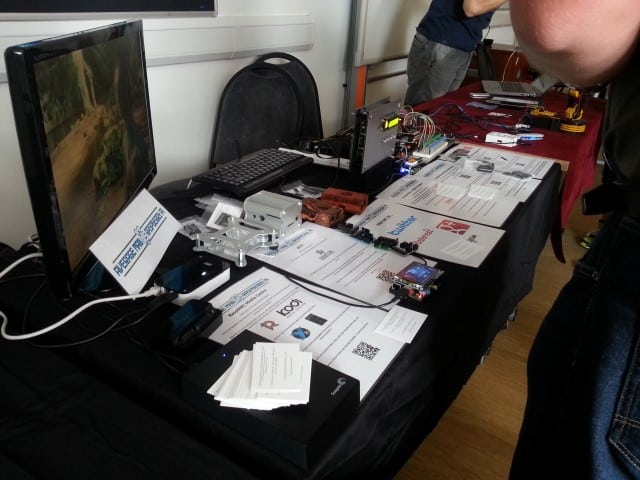 Lots to look at, a feast for the eyes!

I printed some info sheets to explain my projects 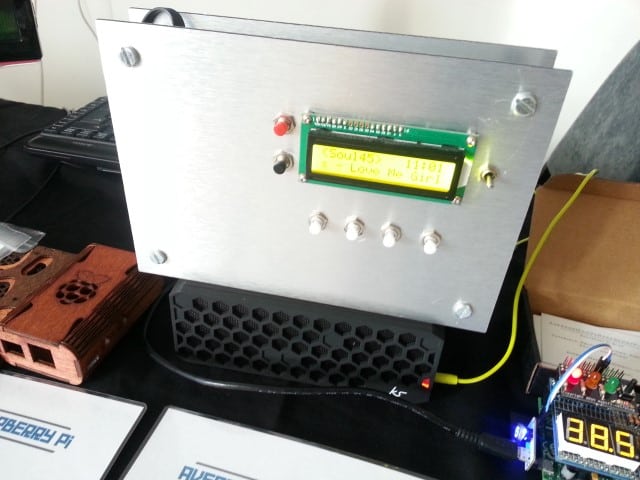 My PiRadio was pumping out some Soul classics! 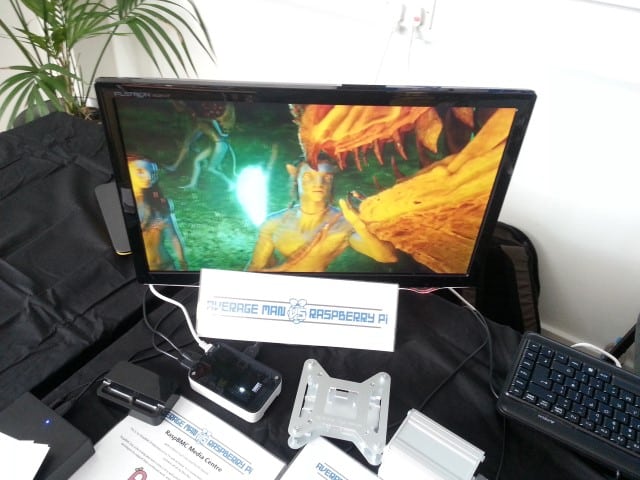 Avatar was playing on my RaspBMC Pi – a popular project 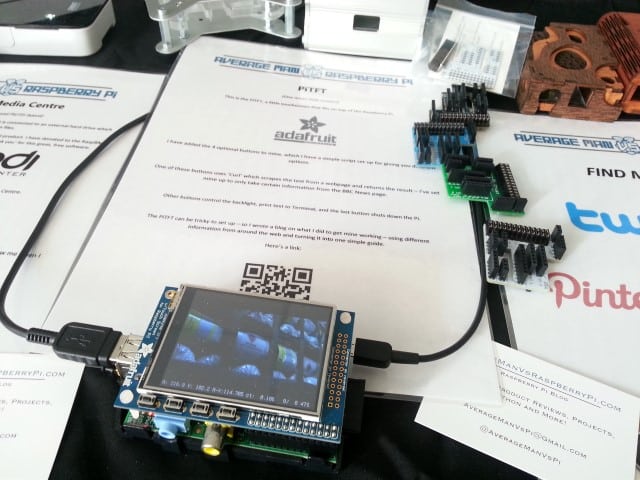 Avatar was also playing on my little PiTFT 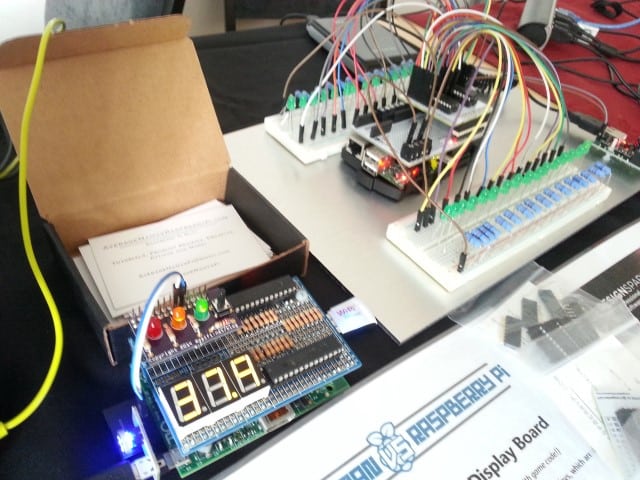 I also brought along my home-made DesignSpark PCB firing out to 32 LEDs via a couple of MCP23017 chips.

I had 20 of these boards made as a bit of a test, and RS own the free DesignSpark tool, so they were kind enough to offer the parts needed to complete the boards and give them away at the event. It’s safe to say they didn’t last very long! 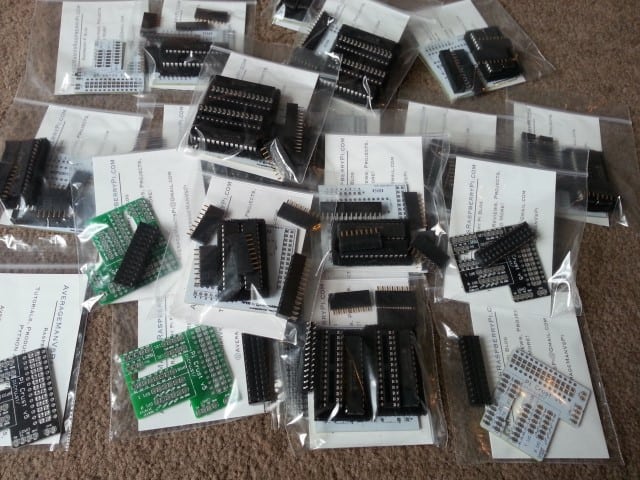 Lots of freebies thanks to RS DesignSpark PCB!

Now one of the snags of doing a table at one of these events is that it can be difficult to look around yourself. I did manage to get a good look at the projects next to me though.

To my left was a friendly chap showing off his impressive robot arm, armed with a camera and a laser (laser was disconnected for safety reasons!). He had this running with HTML, controlling it via his phone and tablet – very cool – and has increased my thirst to learn some robotics: 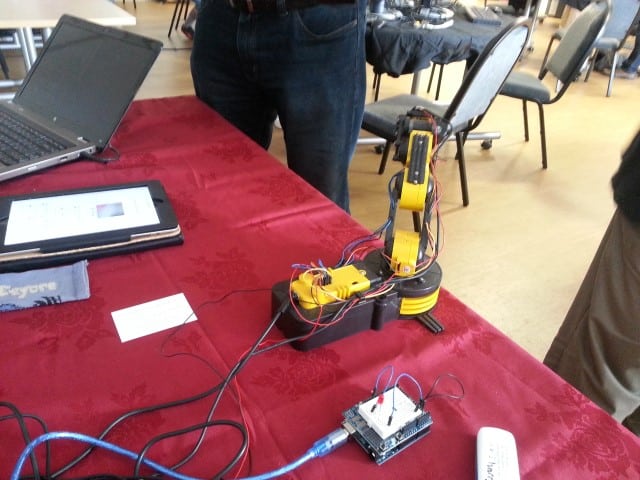 The robot arm with camera, powered by a Pi and Arduino

To my right was an educational stand – “The Cable Table” – showing people how network cables work, how to fit new connectors on the ends and the differences between Cat 5, Cat 6 cables etc. I learnt a lot here, and I’m definitely getting a connector crimp tool now – I think most of my Ethernet cables have broken clips! 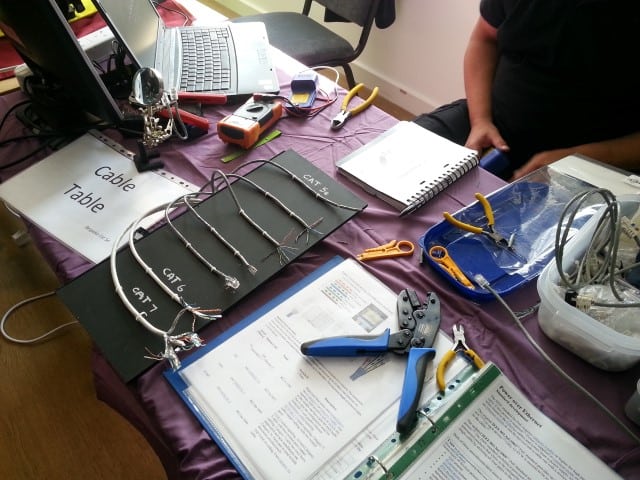 I learnt how to fit Ethernet connectors at the “Cable Table”

I didn’t get a great deal of time to see other displays, but managed to get a few snaps on my way out, as unfortunately I had to leave early for a family BBQ in the afternoon. It’s a shame as there were some very interesting projects on show: 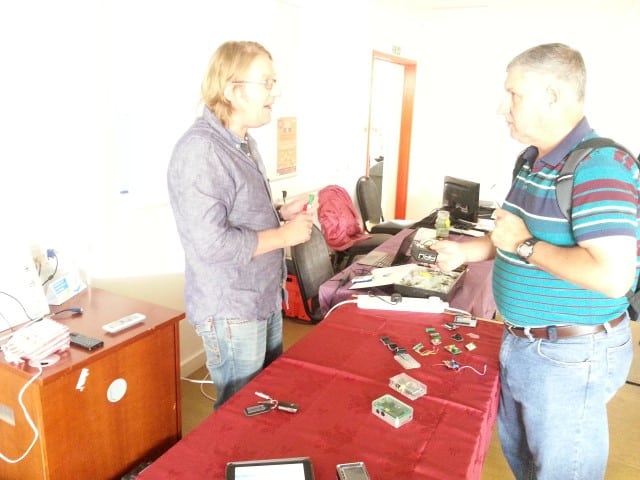 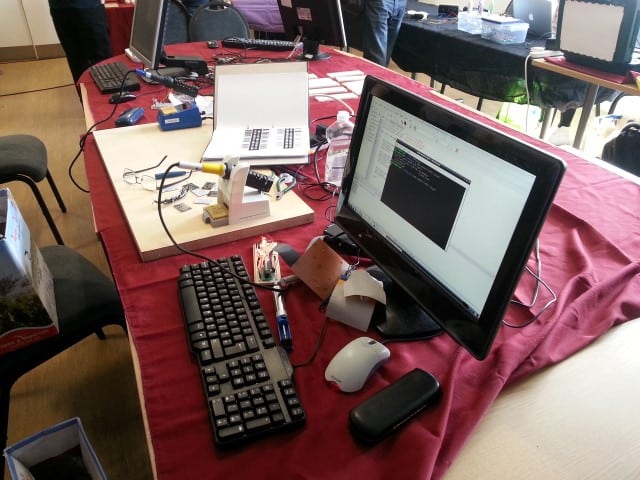 The soldering station was ready to teach better soldering techniques 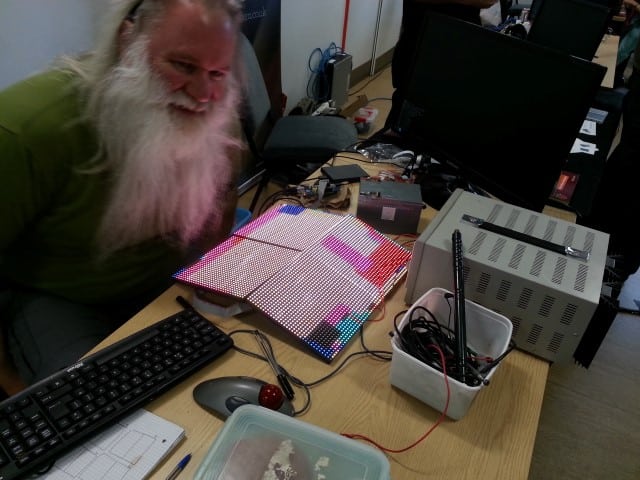 A VERY colourful display piece, and a fantastic beard! 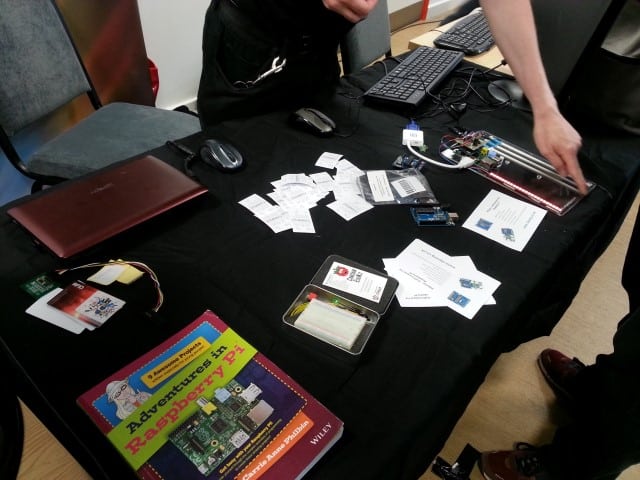 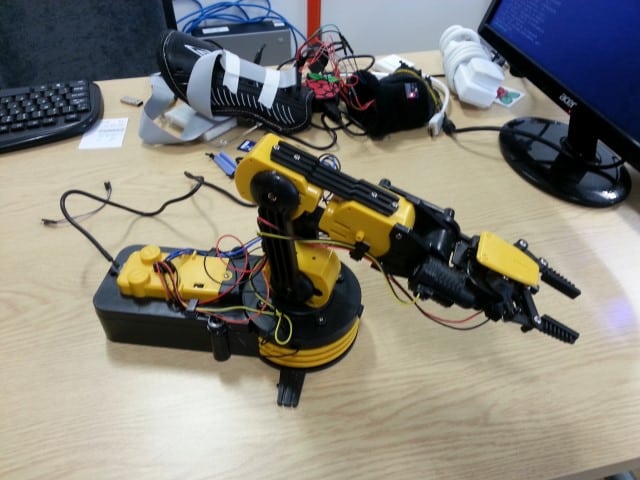 Another robot arm, this time with pincers! 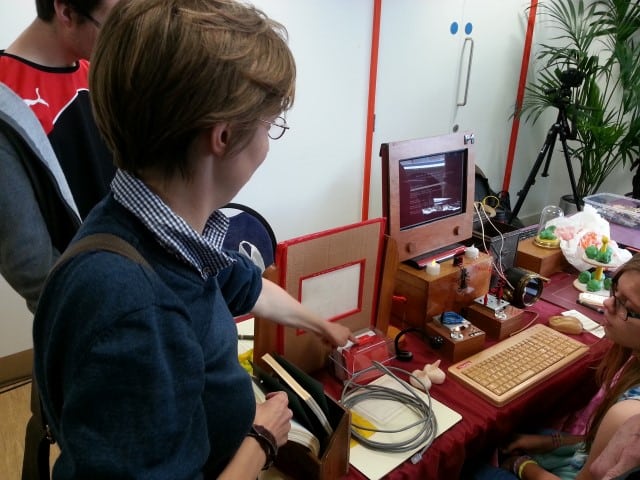 A very eye catching display, wish I had more time to have a good look 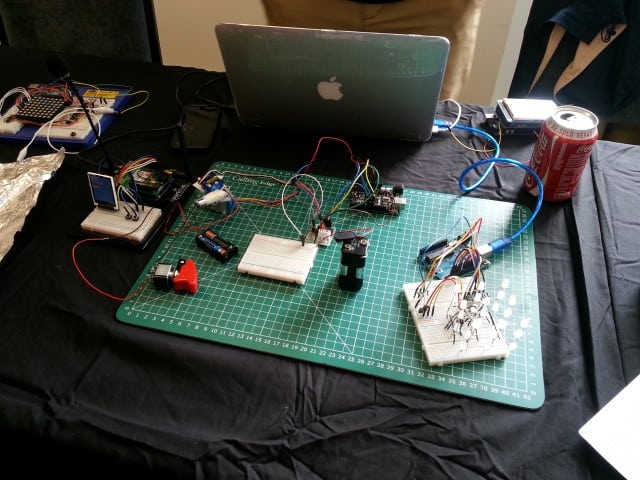 An LED cube, I’ve wanted to make one of these for a while 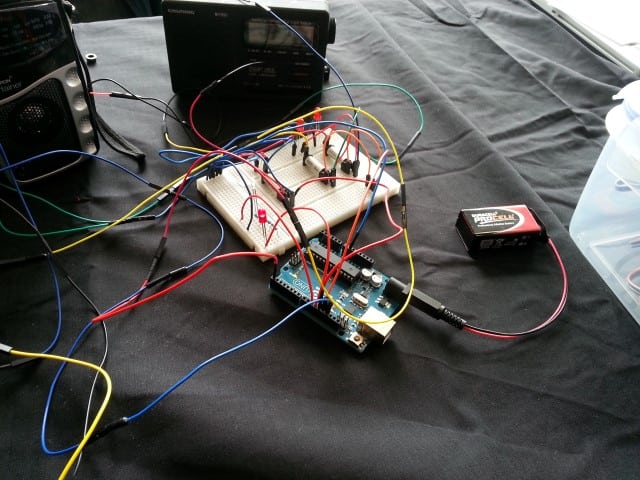 Not sure what this is – anyone know? (comment below) 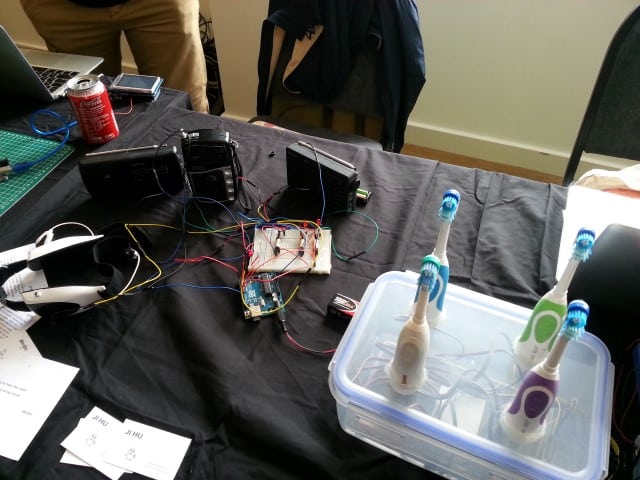 I was told that this was a mind-controlled toothbrush project?!? 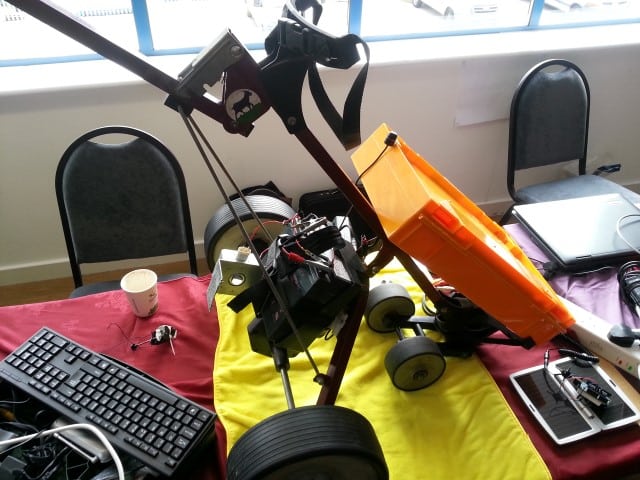 A golf caddy project – again, I wish I had time to ask more about this

Even though I only stayed for a few hours, I had a really good time. I got to meet many of my Twitter friends, fellow bloggers, SoSLUG members and all of the people who came to talk to me at my table.

The SoSLUG guys did a tremendous job of organising the event, both with pre-Jam information and help on the day. Hopefully the guys can sneak another Raspberry Jam in before Christmas…

If you came to the event, comment below and let me know what you learnt, what your favourite table/project was, who you met etc…would be great to hear from the people I spoke to.