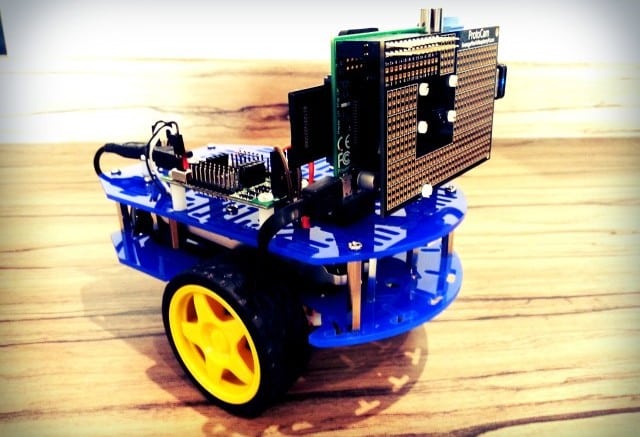 If you follow me on Twitter, you’ll know all too well that I currently have a Kickstarter campaign running for a new Raspberry Pi prototyping board that houses the Camera Module within the prototyping space.

I’m working on a few example boards to show people different ways they can use my new design. After some discussion on Twitter from one of my backers, I decided I would rebuild my Dawn Robotics PiRobot with the ProtoCam and Pi mounted on the front.
Using a ProtoCam mounted on the front of your robot is a really easy way to get a robot cam setup, but also gives a good amount of prototyping space to easily add sensors right at the front of your chassis. It also gives you much more free space on your chassis for other parts/sensors (or to use a smaller chassis!)
Read on to see how you can use a ProtoCam kit (and some generic ‘L’ plates) to easily mount a camera on your Raspberry Pi Robot…
Starting Point
This is a great modification for your existing robot project if you want to add a camera to it. Using the Pi and ProtoCam mounted on the front saves a lot of space on your robot chassis for other things such as controller boards, batteries and sensors. 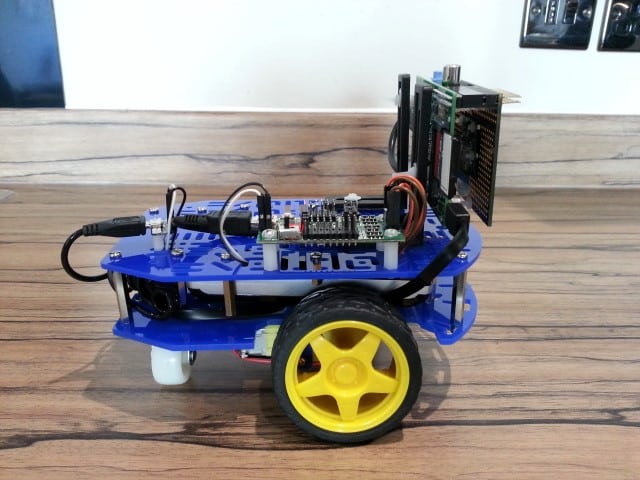 Lots more space on the chassis for adding batteries, boards and sensors

With the right layout, I think you could even get away with having a single chassis plate whilst using the ProtoCam, using the space behind it to mount them on. (Normally your Pi would be here).
This blog post isn’t going to go through how to build a robot and the software packages as you’ve probably already got that far. If not, it’s an extremely well covered subject and if you’re buying a robot chassis from someone like Dawn Robotics, they have all of the code and downloads ready for you (plus I will be writing a blog on building a Raspberry Pi robot soon anyway)
Parts
To mount your Pi and ProtoCam to the front of your robot, all you really need are some L-plates tall enough for the highest mouting hole on your Pi, some screws/nuts, and of course a ProtoCam board! (and obviously a Raspberry Pi Camera Module – I got mine from RS Components) 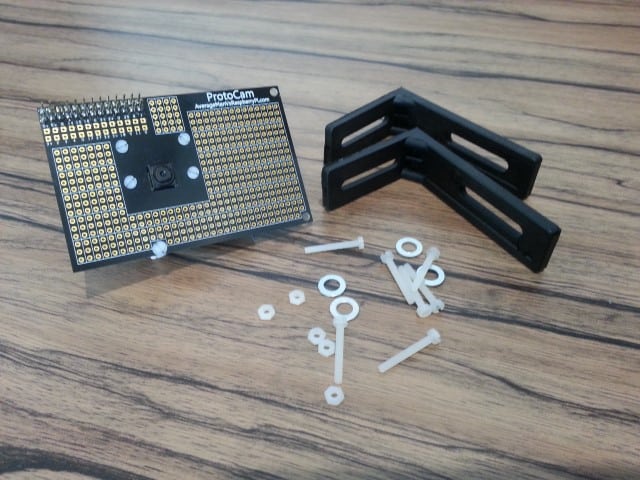 All you need is a protocam, some L brackets and some fixings

Fitting
I jumped on eBay for the L-plates – just some simple plastic ones designed for kitchen panels, a couple of quid for 10 of them – the adjustable ‘slider’ design is helpful for fitting. DIY store metal brackets are probably a good shout too, just make sure you use plastic spacers to avoid shorting anything out. 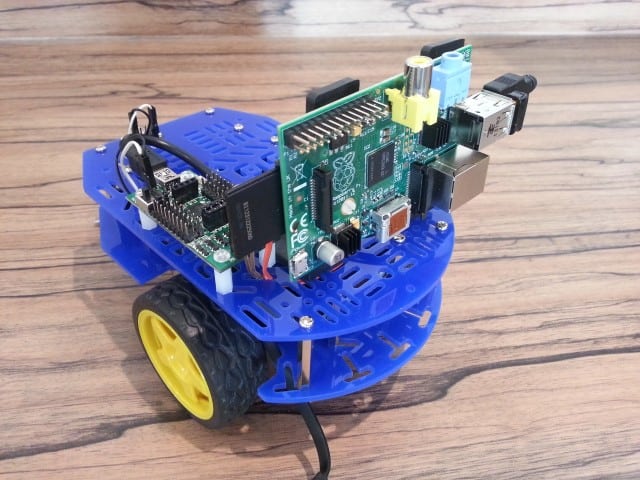 Under the hood: The Pi is mounted, ready for the ProtoCam

Most robot chassis on the market come pre-cut with lots of different holes and mounting options. This is perfect for mounting a ProtoCam on the front of your robot as you have lots of options as to where you fit the L brackets – right at the front, set back, sideways – it’s up to you, but I went for for the frontal mount. 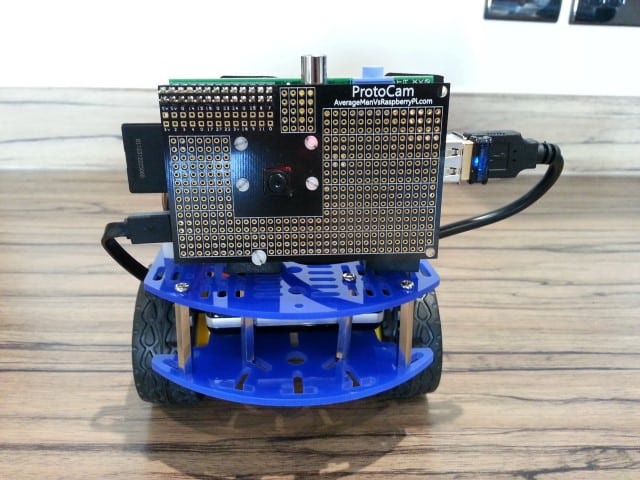 Use the prototyping space to add sensors and lights

I think it’s best to mount the L-plates to your Pi first so you can then work on finding the perfect spot on your robot chassis.
Just take a look at how much space I now have on my chassis top plate: 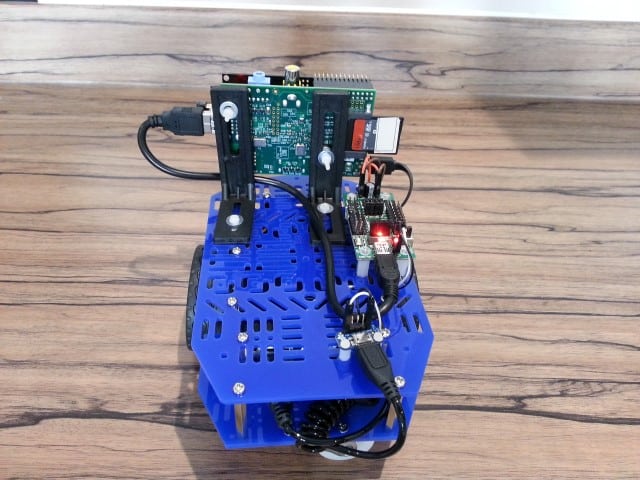 I now have enough space for more sensors, boards and batteries

End Result
Here’s a video of the “ProtoCammed” robot having a spin around my kitchen. It’s struggling with the weight of the power pack I added a few days back – I might have to revert to good ol’ batteries! It leans forward a bit as well, as the powerbank is fitted too far forward – I’ll be tweaking this and adding sensors and lights to my ProtoCam robot – watch this space.
And yes…I really need to learn how to control this thing!
Get a ProtoCam
If you want to add a ProtoCam to your Raspberry Pi robot project, you can get one from most good Raspberry Pi stores.

The Agobo – A Robot Kit For The A+ Raspberry Pi