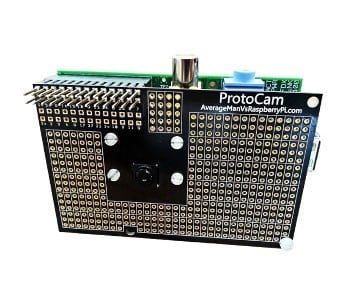 The ProtoCam - making projects with the camera module easier than ever!

After months of planning, design and prototyping – I’m proud to announce my first Kickstarter campaign – The ProtoCam: A Camera Module Prototyping Board for the Raspberry Pi!

I’ve kept this a bit of a secret for the last couple of months, which has been difficult as I’ve been to a few events where it has been tempting to spill the beans, but today the final finishing touches were completed and it’s now live on Kickstarter!

The ProtoCam is a new prototyping board for the Raspberry Pi that holds the Camera Module board within a large prototyping area, opening a whole new world of prototyping projects for your Pi.

It has easy to use lanes of prototyping space around the camera lens, allowing you to get creative with LEDs, displays, sensors, buttons and so much more!

The ProtoCam is a prototyping board for the Raspberry Pi micro-computer, that mounts the Camera Module within a large area of prototyping space.

This design opens up a whole new world of prototyping projects for your Raspberry Pi, allowing you to add whatever components you like around the Camera Module.

Here’s a video showing how it works and some example uses:

The ProtoCam simply connects to your Raspberry Pi using the 26-pin GPIO connector, with your Camera Module secured with 4 small nylon screws. The supplied shorter camera cable then gently folds underneath out of the way. A nylon support screw can be used in any of the 3 provided mounting holes to add extra support if needed. 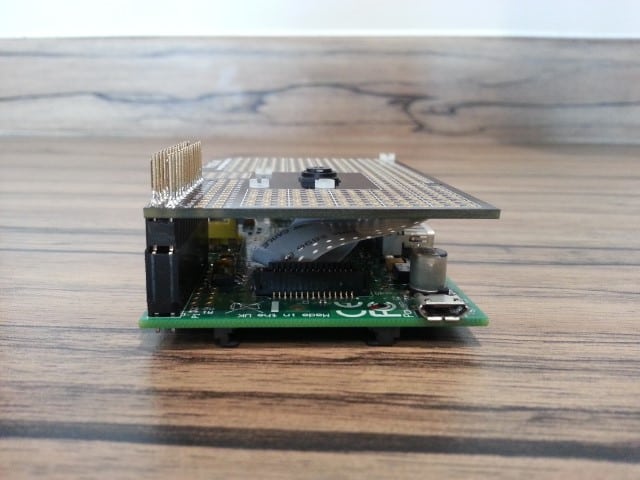 The ProtoCam is a tidy Camera Module prototyping solution

The main feature of the board is the way it mounts your Raspberry Pi Camera Module within the prototyping board, in a compact and tidy way. This opens up a whole new world of prototyping opportunities with the Camera Module. 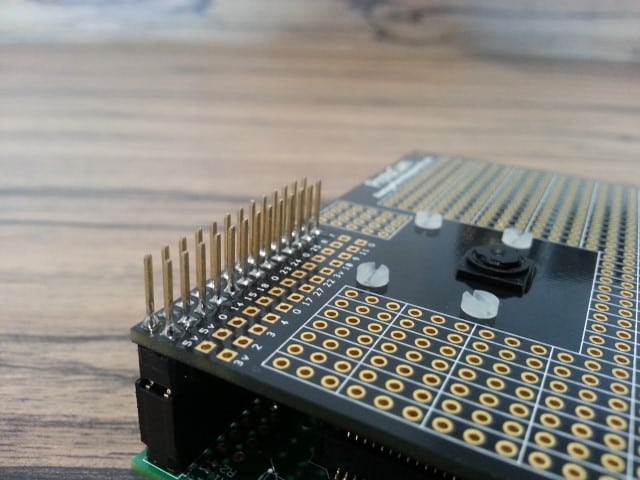 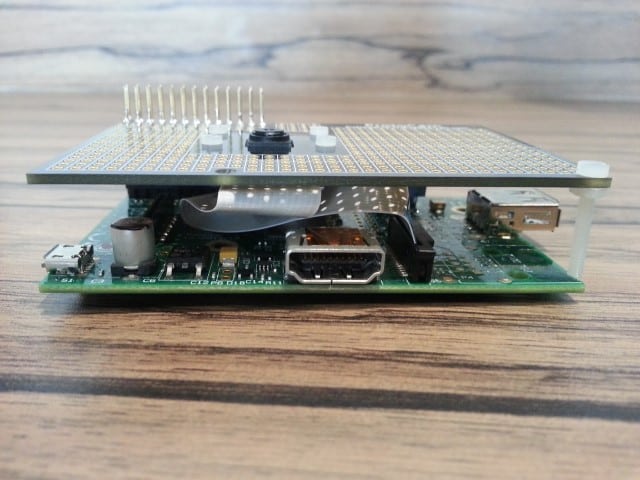 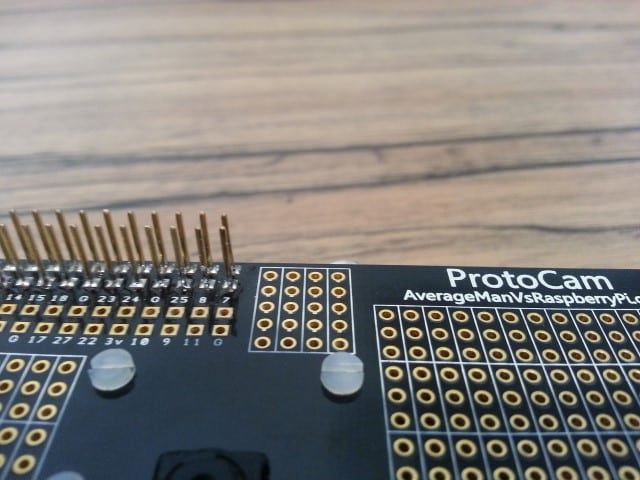 These lanes are great for making more power connections 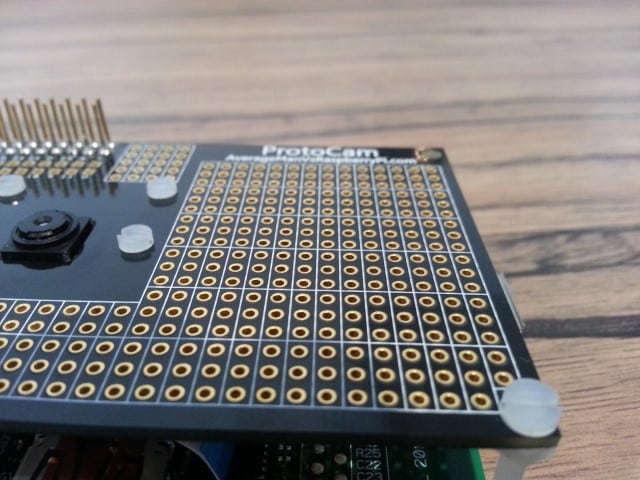 Most of the ProtoCam is covered in prototyping pads 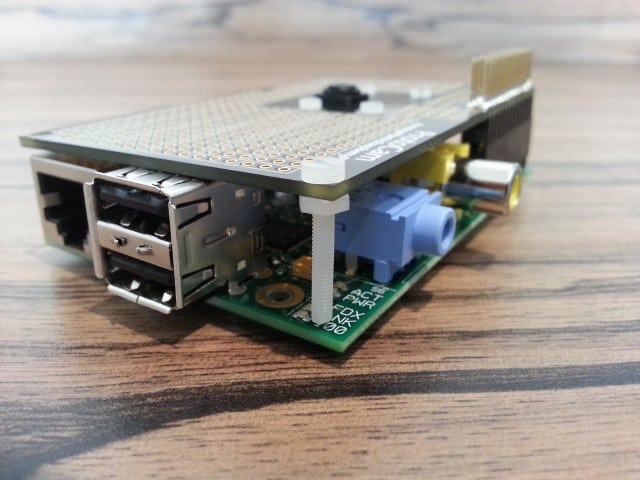 Where Did The Idea Come From?

There are a lot of prototyping boards on the market that are great for making electronics projects, but every time I tried to add my Camera Module into the mix, things just got messy and clunky. With only ‘average’ DIY/Maker skills at my disposal, making any kind of custom mount for both my Camera Module and components was a bit of a nightmare.

That’s when I realised that, with the right height headers, it could be possible to mount the Camera Module on to a push-on style prototyping board. I got to work straight away and the project was born!

What Can I Make With It?

The ProtoCam is like a canvas for your imagination and creativity. With the camera module mounted, it’s over to you to think up fun new projects to make with your Pi.

The obvious one for me is a custom camera flash using ultra-bright LEDs. 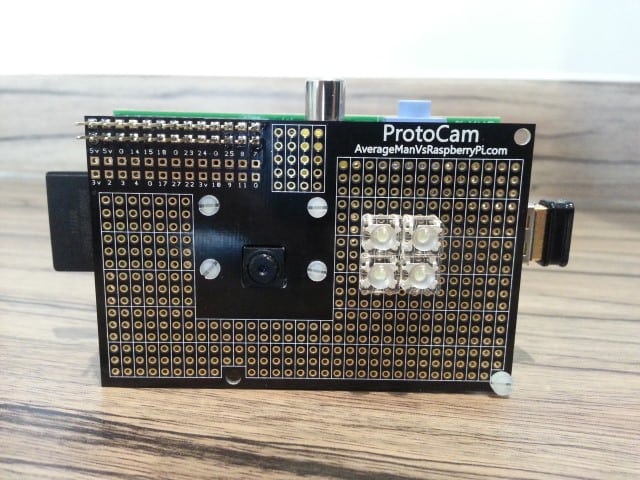 A modest flash setup – you can add a lot more than this!

This can be done many ways, but I find using the 5V power connection is the best way as you have less in the way of limits. Of course you could add an external power source or a port expander for a really serious flash!

It hasn’t got to be a white light either – perhaps you want green, red, yellow…the choice is all yours.

These could be used for many purposes, such as a countdown for your camera shot, or maybe even a count of the number of pictures taken? There are lots of possibilities with these… 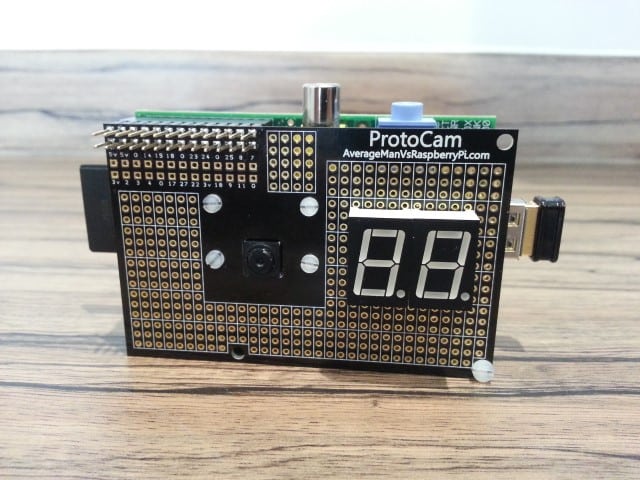 Segment displays are great fun, and can have lots of different uses

To compliment those LEDs and segment displays, why not add some buttons to trigger your project?

Buttons are a great way to tell your Pi to run a certain part of a script, such as taking a picture with LEDs lit, triggering a countdown on a segment, shooting a video, changing settings and much more. 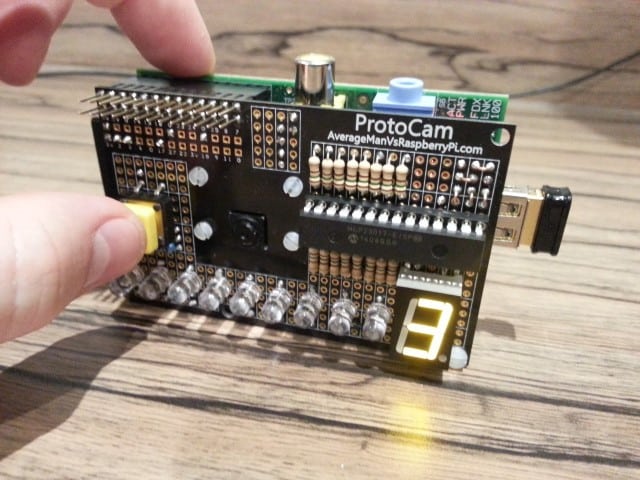 My camera flash project, with a large Adafruit button

One of the things I love about the Pi is being able to use actions in the ‘real world’ as triggers in my projects. With the ProtoCam offering the Camera Module alongside prototyping area, you could add sensors to the board to trigger the pictures or video recording! 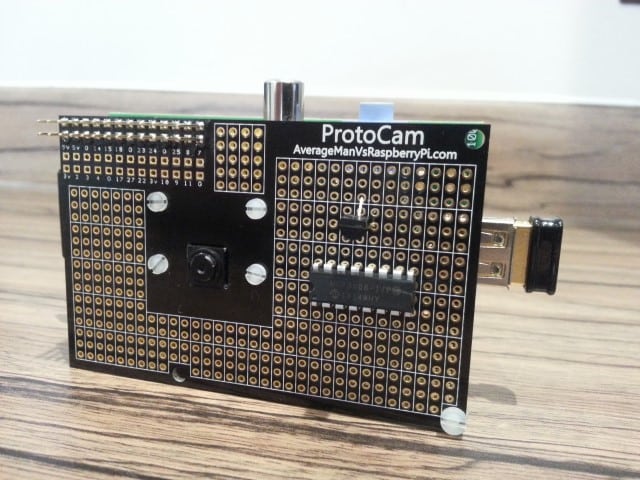 The wide range of available sensors could make fantastic projects!

There are lots of ways to use this – security cams, baby monitors, pet monitors, auto-tweeting pictures, IFTTT integration – loads!

With the ability to take both time-lapse and slow motion photography with the Raspberry Pi Camera Module, a tripod can be a really handy tool.

As the ProtoCam mounts the Camera on a tidy Pi-sized board directly on top of the Pi, using a tripod with your Camera Module is easier and more compact than ever before! 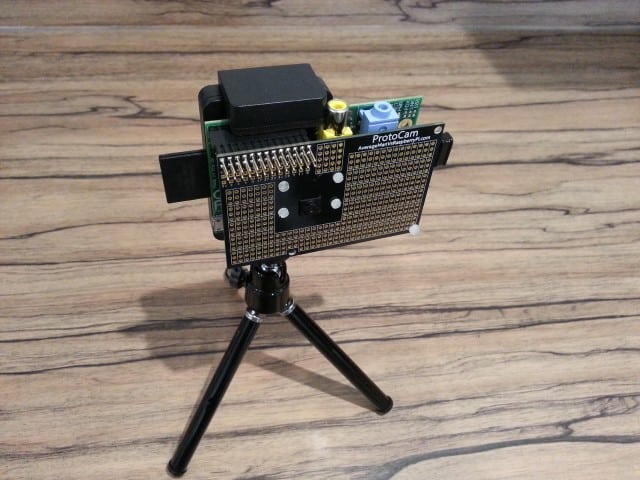 Believe it or not, you can even add mini LCD displays to your ProtoCam – that on its own has so many possible uses! Mini 8×2 displays can be added to the ProtoCam easily, as the pin layout works perfectly with the lanes on the ProtoCam’s board. 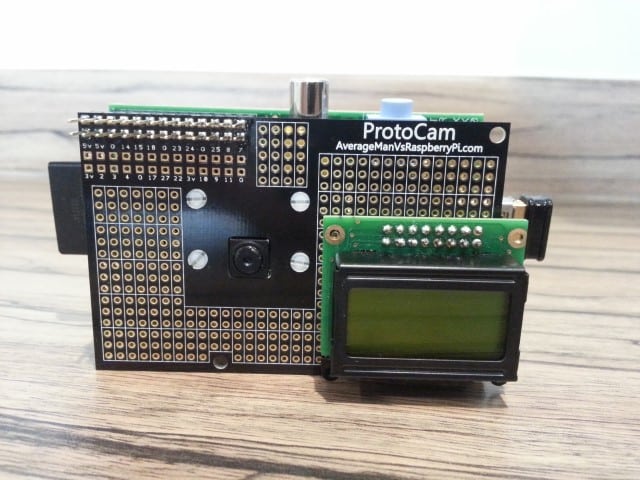 This little 8×2 LCD fits well on the ProtoCam board

You could add one of these along with switches to select image type/quality and display any information you want scrolling across the screen.

These are just some examples I have thought of, but there will be truck loads of other ways to use the ProtoCam that I haven’t even thought of yet!

Where Can I Get One?

If you need a camera module, I recommend RS Components who always have good stock and offer next day delivery.