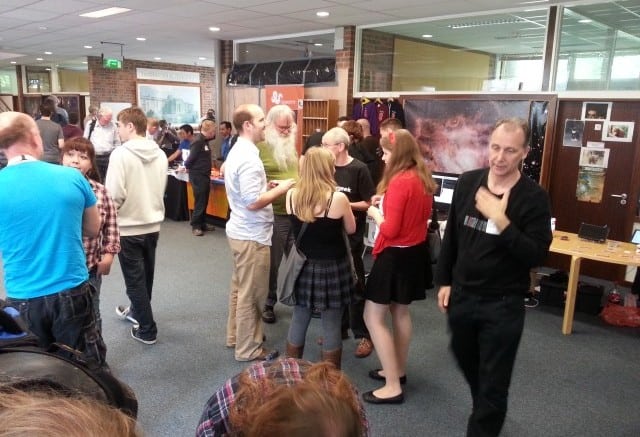 Recognise these faces? Lot's of the 'pi-celebs' came to the show

This weekend included one of the big dates for geeky/nerdy diaries across the UK – the Cambridge Raspberry Jam! As Cambridge is the birthplace of the Raspberry Pi, this particular Jam is always well attended, well organised and full of great things to see and do.
I was lucky enough to grab a last minute table as I initially didn’t think I could make the date, so had a chance to display some of my projects (much like my visit to the Southend Raspberry Jam) and meet a lot of old and new faces. A film crew arrived at one stage (CNBC I think), holding interviews and taking shots!
Once again I unfortunately didn’t get a chance to go to any talks or workshops as I was too busy chatting away about Pis, robots, sensors, projects and all manner of pi-related topics, but I did manage to nip round and get some shots of the various show and tell projects near me.
Read on to see what was on display…
Show & Tell
I had managed to secure a table for the day, where I showed some previous projects, and some thing I had just finished or was working on. It was also a good chance to share my new blog logo. I printed up a stack of ‘Average Man’ Punnet cardboard Pi cases as a bit of a freebie/promotion – which seemed to be popular with the children: 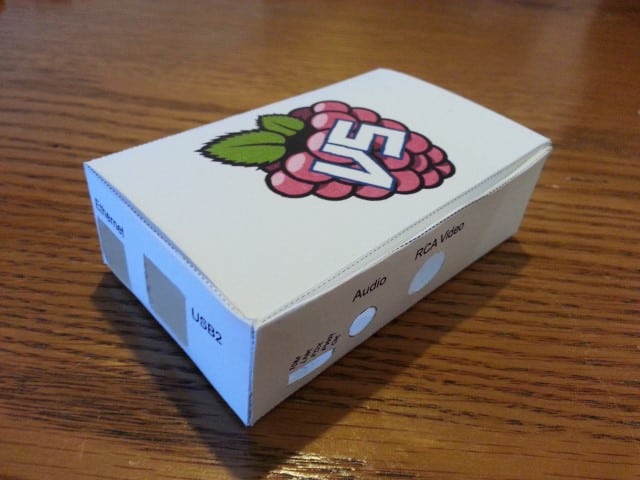 The ‘Average Man’ Punnet case for the Raspberry Pi

I brought along my PiRadio, Nwazet CCTV cam running on MotionPie, my 3.5″ NeoSec screen showing the new Epiphany browser, my Temperature monitor board and finally my ‘not working’ thumb stick ADC prototyping project: 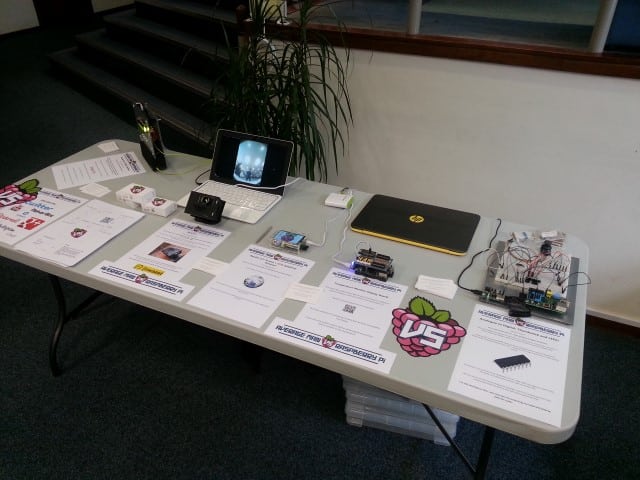 My stand didn’t stay this tidy for long!

Other people had some really interesting and complex projects on show. A lot of projects were from sellers, and the focus on robotics at this Raspberry Jam meant there was a lot to play with (I’ll cover sellers in a separate section below), but individuals came with their projects to show as well.
Here’s a couple of my favourites…
B+ VGA Adapter
Gert van Loo had a stand showcasing his latest design, which is a new VGA breakout/adapter for the B+ Pi. I had a quick chat with Gert, and he explained that the extra pins on the new B+ Raspberry Pi made it possible to create an adapter for VGA, that will allow you to run both HDMI and VGA at the same time. The example screen looked great, and Gert showed me how easy it was to set different resolutions.
As the profit margin isn’t ideal on this board (what with UK electronics regulations and so on), Gert will be releasing this as an open-source design. I’ll certainly be getting a batch made – watch this space for a give away! 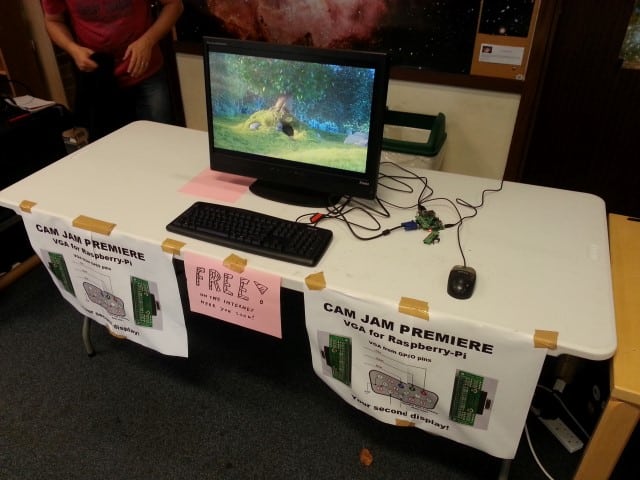 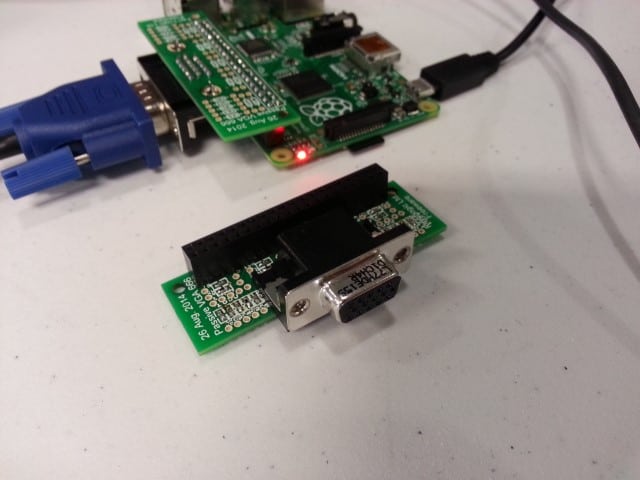 This was one of those projects that really inspires a man! In a nutshell, this machine reads your hand to see if you’re naughty or nice (I’m sure santa has one). It uses a Raspberry Pi Camera Module to read your hand (something to do with red pixels I think) and gives you a naughtiness percentage.
I got 68%…perhaps I should try and be a better person?! A very impressive project, full of mystery and flashing LEDs, and laser cut to perfection. 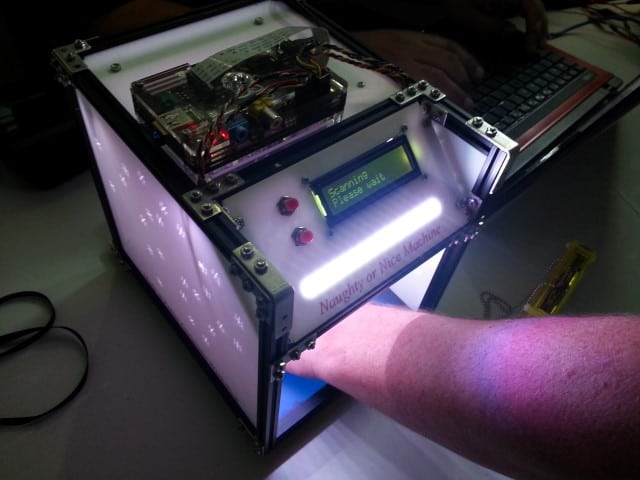 I let someone else go first – safety first! 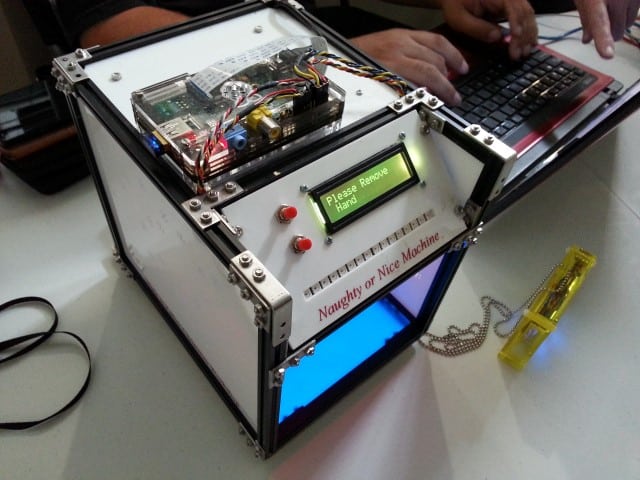 Once your hand is released, the calculation begins 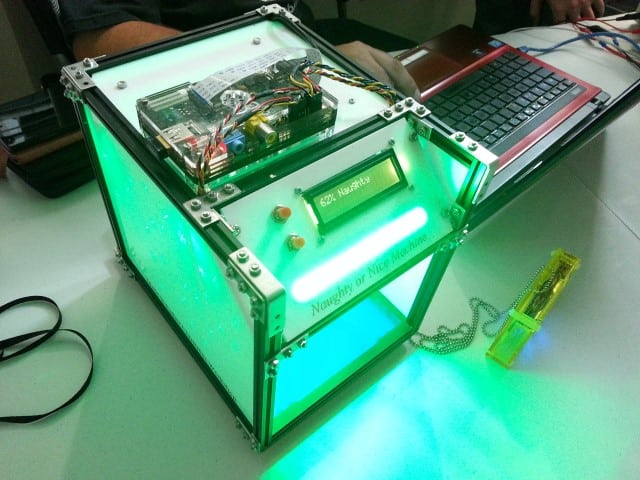 62% naughty – this guy clearly wasn’t as ghetto as the Average Man!

Sellers
Lots of sellers were in attendance at this Raspberry Jam, which seemed a popular feature – giving people a chance to save on postage and get some special show deals. It also also gave the sellers a chance to really showcase their products to help people understand what they are buying, how to use it etc.
I had some great chats with the various shops, and saw Dawn Robotics, The Pi Hut, The Little British Robot Company, SK Pang, Ragworm, Pi-Borg, 4Tronix, Alex Eames/Raspi.TV with the new HDMIPi