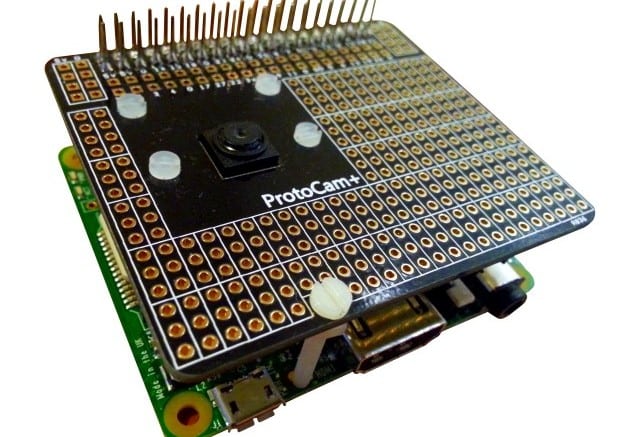 The ProtoCam+, an easy way to make projects with your camera module

Earlier in 2014 I released the ProtoCam – a Camera Module add-on board for the original Model A and B Raspberry Pi. It was released on Kickstarter and was successfully funded – and they’re now all over the globe (and in the shops!)!

Just before I released the original ProtoCam, the Raspberry Pi B+ was launched, with its different layout and 40 GPIO pins. Soon after that (and as predicted by many in the Pi community) the A+ was released – the smallest Raspberry Pi so far!
I couldn’t resist making a prototype ‘ProtoCam+‘ for the new Pi models, and I’m so happy with it that I’ve decided to release it as another Kickstarter project.
The ProtoCam+ shares a lot of the design features of my original ProtoCam add-on board, but in a smaller size that fits both the B+ and A+ Raspberry Pi.
Read on to find out more about my new ProtoCam+ kit…
What Is It?

The board has a cut out for the camera lens, and mounting holes which let you mount the Camera module board to the PCB. 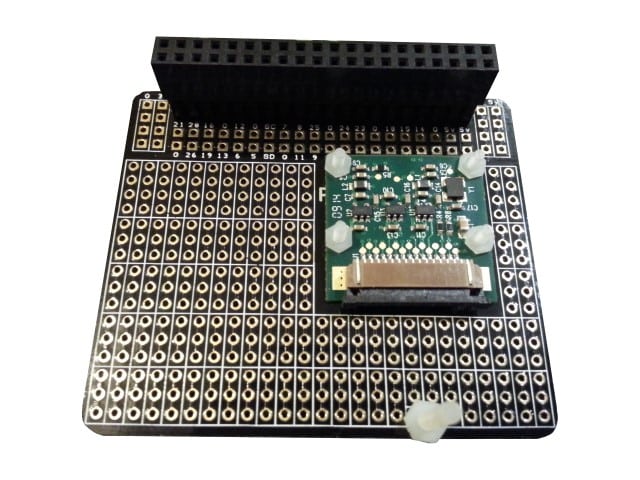 The rear of the ProtoCam+ with the Camera Module attached

The ProtoCam+ has a few new features compared to the original ProtoCam – mostly from suggestions following my last campaign.

Camera Module Mount
The main feature of the board. Your Raspberry Pi Camera Module mounts to rear of the board, with the camera lens facing out from the front. This is what it’s all about – making it really easy to make a project that includes the Camera Module. 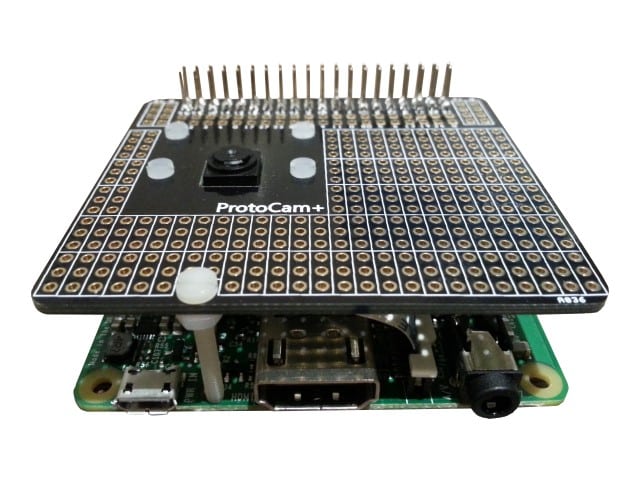 The front of the ProtoCam+

Fits The A+ and B+ Pis
This kit fits the newer model Raspberry Pis – the A+ and B+ versions. If you want a ProtoCam that fits the older models, take a look at the original ProtoCam kit on ProtoBoards.co.uk. 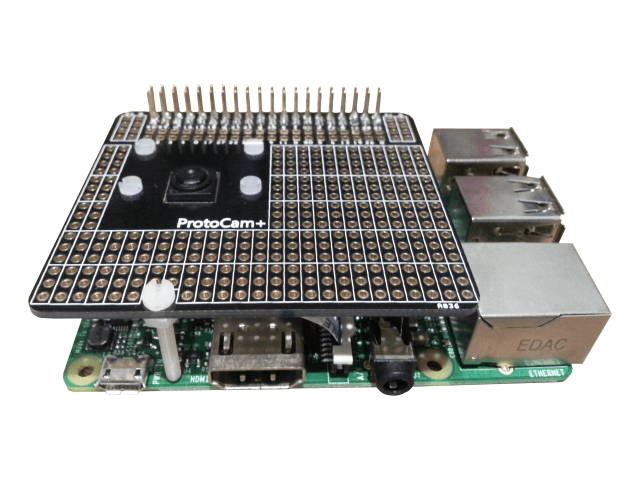 The ProtoCam+ fitted to a Model B+ Raspberry Pi

Your original 150mm Camera Module belt doesn’t hold a fold very well, and is too long to tuck under the ProtoCam+.

The ProtoCam+ includes an 85mm belt that has a much thicker quality which folds, and stays folded, really well. 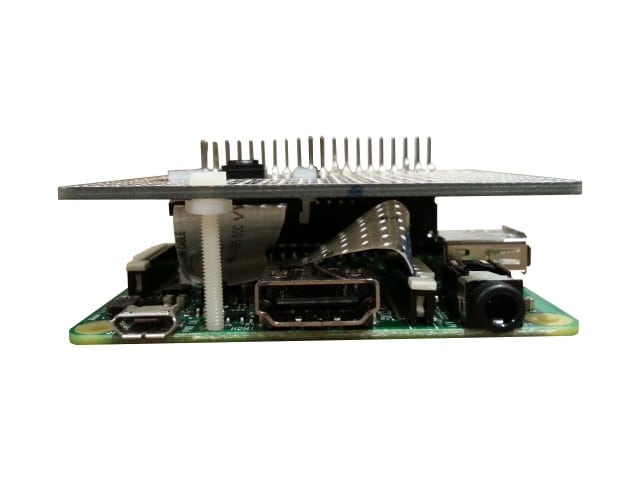 Large ‘Breadboard Style’ Prototyping Area
I’ve added no less than 288 pads of breadboard style prototyping area around the Camera Module section. The breadboard lane style makes it really easy to add components without the need for bridging or cutting. 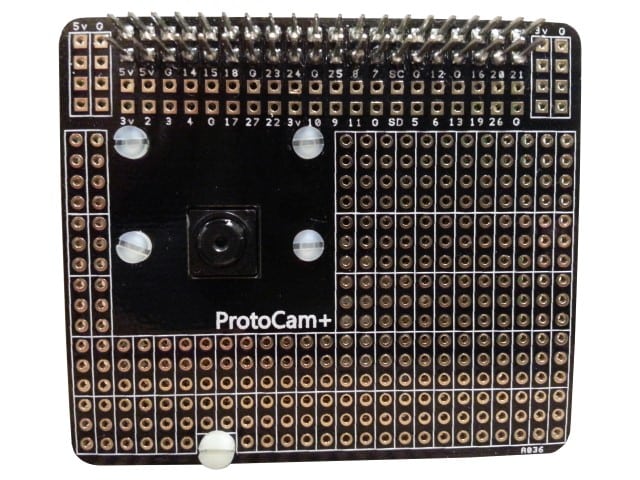 The prototyping area is laid out ‘breadboard style’

Full GPIO Breakout
The GPIO has been broken out to an identical section just below the original GPIO position. Pins are labelled on the front and rear of the PCB to help you build your project.

Here’s the introduction video from the Kickstarter campaign, that will show you around the board:

I’ve already made a little camera flash project with one of the first prototypes. Adding your own flash for your camera module is a great way to introduce yourself into electronics, learn some simple Python code and have a go at some basic soldering.

I added 4x 5mm Ultra-Bright LEDs to 4 of the GPIO pins, and added 3 switches to the GPIO as well. 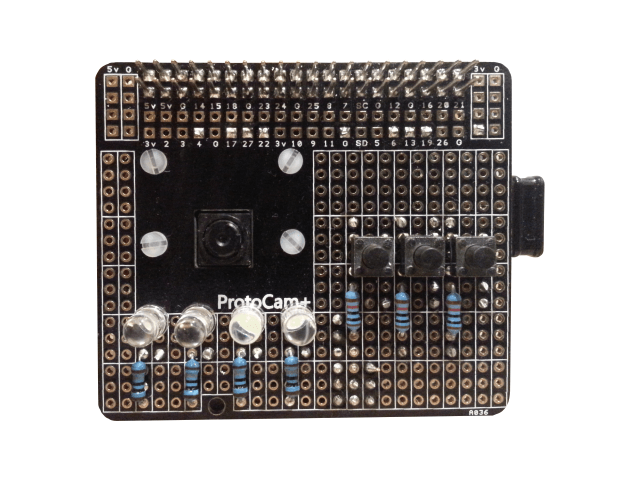 When I click the first button, the python code tells the LEDs to light up one by one. When the button is push with all LEDs lit, we return to no LEDs lit and start again.

Where Can I Get One?

The ProtoCam+ is currently on Kickstarter for £7 (or £6 if you get in quick enough for the early bird). I wanted to keep the price at ‘pocket money’ level to make it accessible to as many people as possible.
I hope you like my latest design and will consider backing the campaign. I plan to deliver all pledges in March 2015.