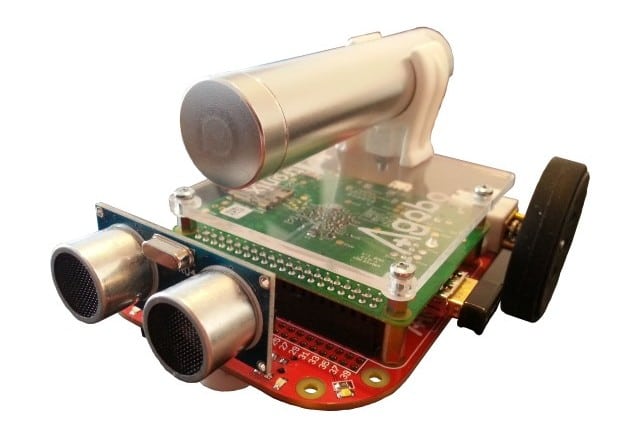 It's very cute...until Skynet kicks in...

When the A+ Raspberry Pi first came out, I’m sure I wasn’t alone in thinking “What can I do with this smaller sized Pi?” – the new mini footprint gave us Pi fans a renewed burst of enthusiasm and creativity.

Whilst I was pondering the option of an even smaller Pi Internet Radio (as I STILL haven’t finished mine properly!), the guys over at 4tronix headed straight for a robot design and came up with the ‘AgoBo‘.

The Agobo is an ‘all-in-one’ robot kit for the A+ Raspberry Pi. It’s instantly recognisable for its small size thanks to the hybrid chassis. Using the robot’s PCB as the base cuts on the size and cost – and with the little A+ as the ‘brain’ – everything stays tiny.
I have been sent a sample to take a look at – and just like my last blog, if you’re a subscriber you can WIN this sample straight out of my average hands! Keep reading to find out how!
Let’s get “Agobo’ing“….
Assembly
As always, I can’t tell you squat until I build the little guy. Sometimes it’s nice to show you how to build the products I review, but this has already been very well covered by 4tronix.
What is worth mentioning here is that assembly is just as easy as Meccano as it’s mostly pre-assembled – no soldering or any of that messy dangerous stuff, just push-on parts and a few screws. Ideal for beginners and those not so keen on that side of making/hacking.
Here’s a video of me building the sample robot at about 8x the speed:
https://www.youtube.com/v/3hcMeBWBxQ4?version=3&f=user_uploads&c=google-webdrive-0&app=youtube_gdata
Features & Options
Busy Board
The party piece here is the main PCB/chassis hybrid. It’s pre-assembled ready for the other parts to be pushed on, and packs a lot of gear into a tiny package. 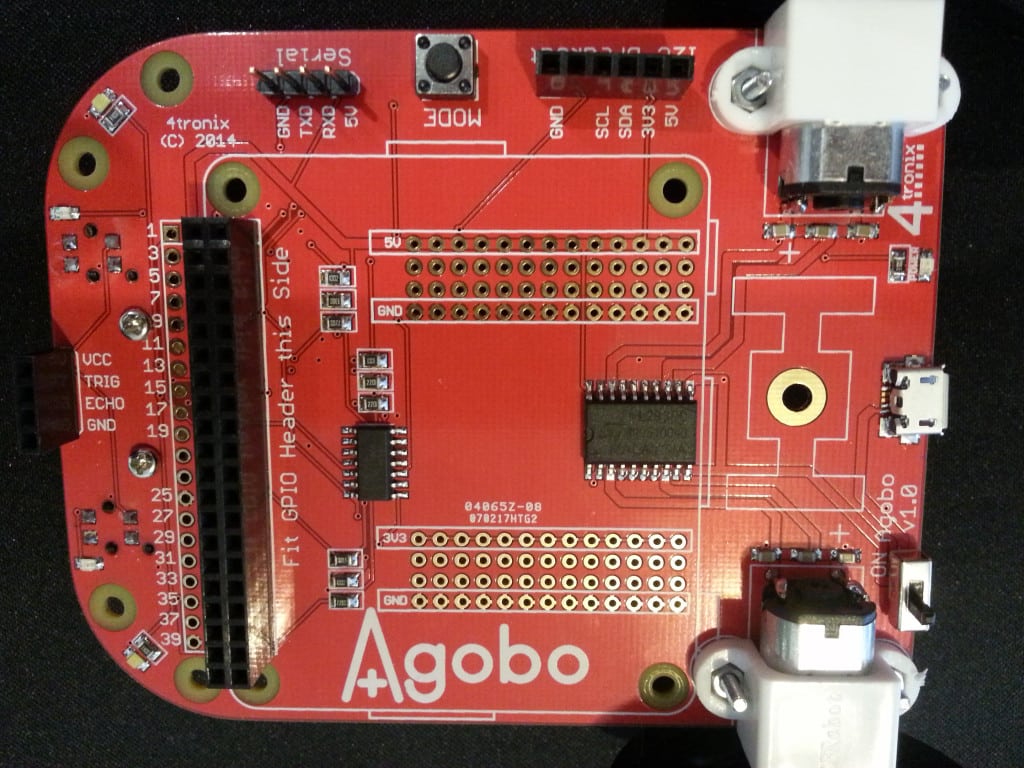 The PCB is packed with pre-assembled components

Two micro-metal gear motors are installed to the rear, next to and on/off switch and micro-USB power connection.

In the middle of the board there are I2C and serial breakout headers, a mode button, prototyping area and the header to connect your A+ Pi.
At the front we have programmable LEDs, a GPIO breakout, an ultrasonic sensor header connection and line following sensors. There’s also the ball castor for movement. I wasn’t joking when I said it’s ‘packed out’! 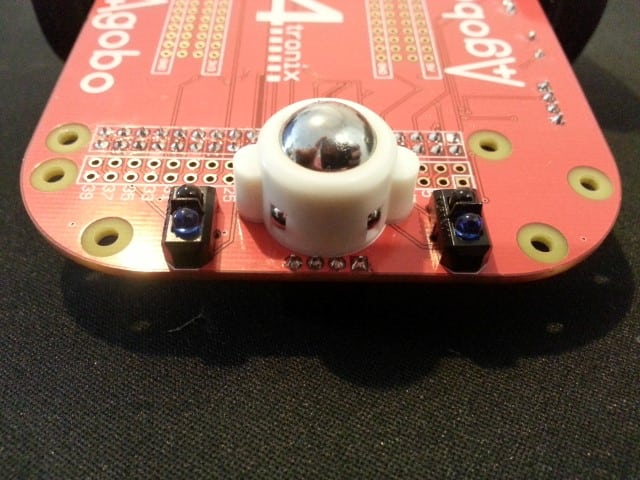 At the front is the ball castor, line following sensors and LEDs

Ready To Roll
Once assembled, the robot is ready to roll thanks to the ‘all-in-one’ design. You don’t need to anything anything more than a Raspberry Pi, SD card and WiFi dongle.
Hackability – Code
The robot itself is mostly pre-assembled and ready to go, which might give you the impression that this is a bit of a ‘plug n’ play’ kit. Whilst the initial setup is easy, the hackable side is what you do afterwards.
If you’re buying the basic kit (£24.95) with no intention of adding more, then I would say the hackable side is mostly the coding. With the included sensors, motors and LEDs you could create hundreds of different scripts for different projects – and there’s a lot of example code to help you with that. 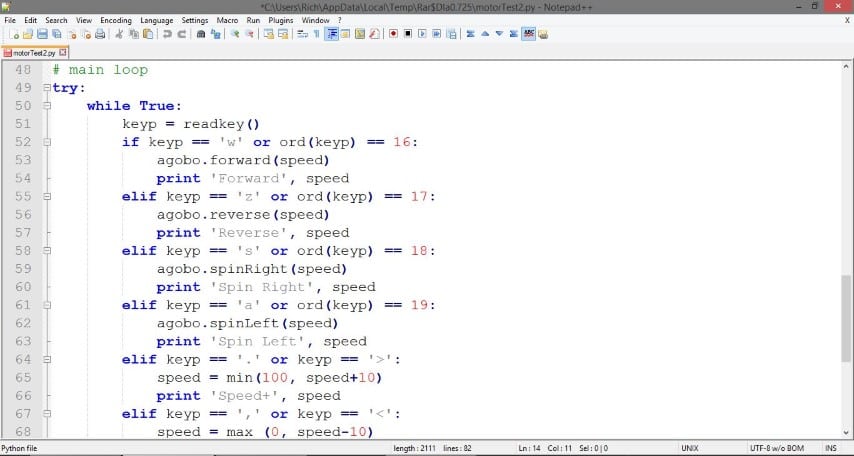 The code examples get you started quickly

If you’re interested in adding more hardware, then the hackable side really comes out to play.
The obvious addition would be an ultrasonic sensor that would slot straight into the header at the front, and would give you that ‘eyes’ look along with a lot of new project/code abilities.
There’s also an optional PlusPlate on offer that gives you a large prototyping area, GPIO breakouts, a neopixel (with connections to add more) and even a section ready to add a wireless transceiver! It’s fully loaded with cheese on top. 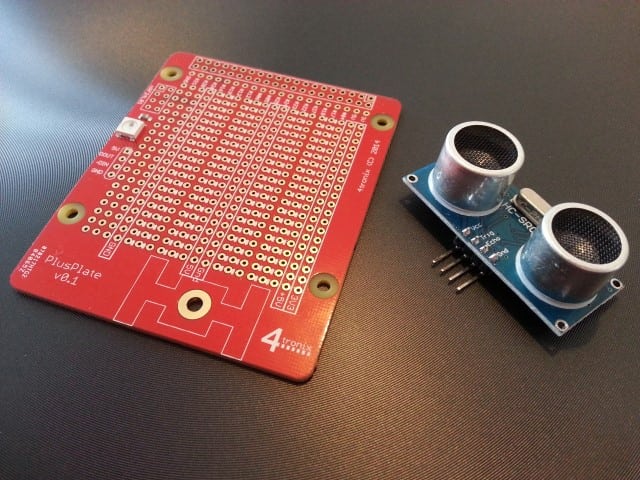 Add-ons can take your Agobo up a notch

Lastly, and included in my sample, is a the acrylic plate add-on to protect to the PCB…but also makes it look cool too.
Code
I’m certainly no robot specialist, and my coding skills leave a lot to be desired – so would this be a good choice for beginners and those new to the scene?
The answer is a resounding ‘Yes’. The nerdy nerds at 4tronix have created a library to be used specifically with this robot, and include example scripts for testing each of the robot’s components.
Making the robot move is as simple as downloading and running these scripts and/or using the library to create your own. I’ve made a short video showing these example scripts (apart from the line sensor one) below:


https://www.youtube.com/v/5q48FvTduY4?version=3&f=user_uploads&c=google-webdrive-0&app=youtube_gdata
You can quite easily take the bits you want from these scripts and stitch them together to make your own programme.
Usage & First Run
I never know what to expect with Pi robot kits. They’re all very different in terms of control method, speed and manoeuvrability – so I was looking forward to seeing how this one performed.
With the Agobo assembled, I downloaded the example Python scripts and ran them one by one, expecting them not to work as knowing me I had probably done something wrong along the way.

To my surprise, the Agobo worked straight away! I used a WiFi connection with my Pi and SSH’d in to run each script. Even on WiFi, the motor example scripts were very responsive, allowing me to control the robot simply using the arrow keys on my laptop.
It certainly beats the home made robot I have been working on! (more on that soon once I get it running)
Summary
After assembling, coding (kind of) and using the Agobo, what are my final thoughts?
I certainly think it’s a good buy for robotics beginners, no doubt. The price point is the first attraction, and then the ease of assembly combined with the code libraries and examples. It also accommodates robotics progression with its ability to add more components for more complex projects.
Those who are a little more experienced in robotics are likely to enjoy the novelty of the small form-factor and use of the A+, as well as the surprising amount of components that can be added to the board – allowing all sorts of advanced coding. However, these ‘pros’ may long for something a little more flexible – as the pre-assembled PCB chassis restricts any layout changes or different battery/motor options.
For me, this robot’s key selling point is its size and price. It’s a midget, which I really like, and the price is equally as tiny. It’s also seriously easy to use.
Agobo Give-away!
The guys at 4tronix have kindly let me give away this robot as part of this blog!

This give-away includes the Agobo robot kit, PlusPlate add-on and the acrylic plate – worth over £30 and posted to the winner for free via Average Mail! 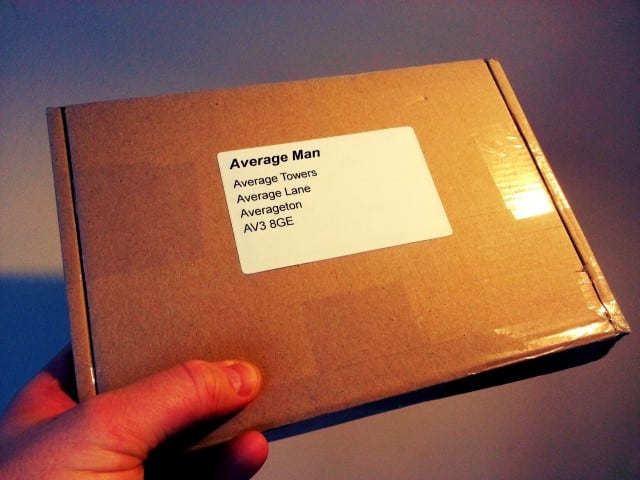 Just like last week, to be in with a chance of winning you simply need to be a subscriber of this blog. (Click here to subscribe)
A winning subscriber will be picked at random and announced on Saturday 31st January.

I also chose a runner up to win a ProtoPal prototyping board – that was subscriber #132 – Cody Erekson! Well done both!
Good luck Pi People!
Average Man