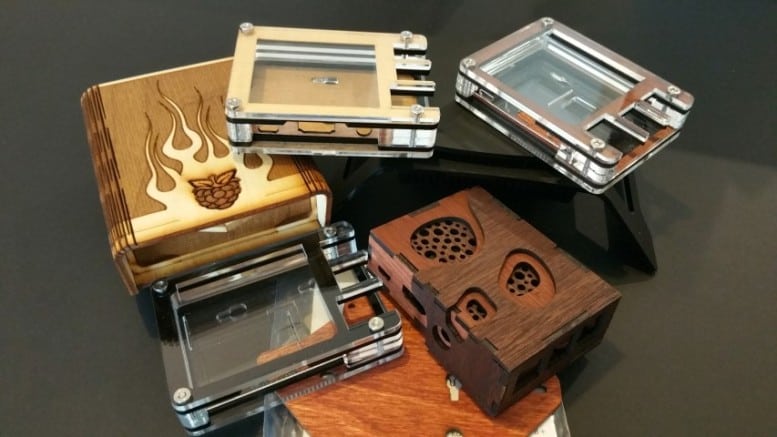 It's been raining Pi cases in Average Towers this week.

I’m taking another break from my Pi Wars robot project this week to check out a big ol’ box of Raspberry Pi cases that were sent to me in the post.

It all started when I contacted Dustin over at C4Labs asking him if there was a UK supplier for his cases. I had my eye on one of their retro Bel-Aire cases and was keen on getting one for my KODI media centre in the lounge.

Dustin, having worked hard on lots of new case designs recently, offered to send me a few samples for me to look at and share on my blog, and you know what that means…

For those of you who don’t come here often, I try to give away any product I’m sent to review, as long as I’m done playing with it of course. As Dustin sent me a handful of Raspberry pi cases, I’m giving away four of these this week to random lucky subscribers – anywhere in the world!

Let me show you the goods!

I like to get to know the companies that I talk to as part of this blog, so let’s learn a little more about these guys before I show you the Pi clothes.

C4Labs.net are an up and coming manufacturer of unique cases for the Raspberry Pi, Arduino, Trinket and other micro computers. The thing that sets them apart for me, is the fact that they offer a big range of 100% wood cases.

Whilst that’s not everyone’s cup of tea, I love the look, feel and smell of laser cut wood in the home! I first came across them when I reviewed the FlexPi case back in April 2014. I still own that case today, and it still smells like a forest being torched.

As part of scaling up and releasing a fresh catalogue of cases (including stocking megamakers Adafruit), they’ve recently moved into a new headquarters in an old mattress factory built in 1890! It’s located in Tacoma near Seattle, and Dustin tells me the area is a little ‘sketchy’…

“Only one guy in our building has had someone try to mug him” he writes. Only one Dustin? I must visit some time… 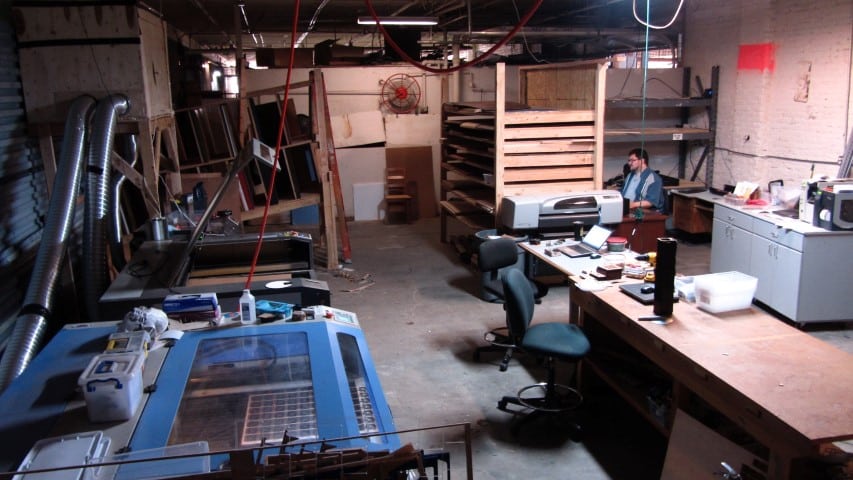 The C4Labs headquarters – once the birthplace of many mattresses. Dustin’s designer can be seen at the back.

Anyway, back on topic, here are the cases that arrived in the post:

This is the reason I got in touch with Dustin – I just fell in love with this thing: 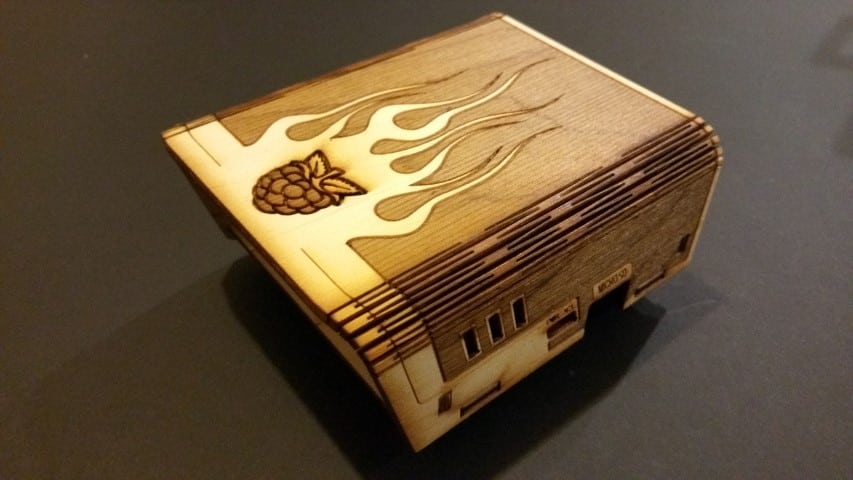 The Bel-Aire – you will not find another case like it!

It might be a bit ‘out there’ for most people, but I’m a big fan of the retro 50’s hot rod styling. I think it’s just clever that this is all made with a bit of flat birch.

Like a lot of good things in life, the back looks just as good as the front: 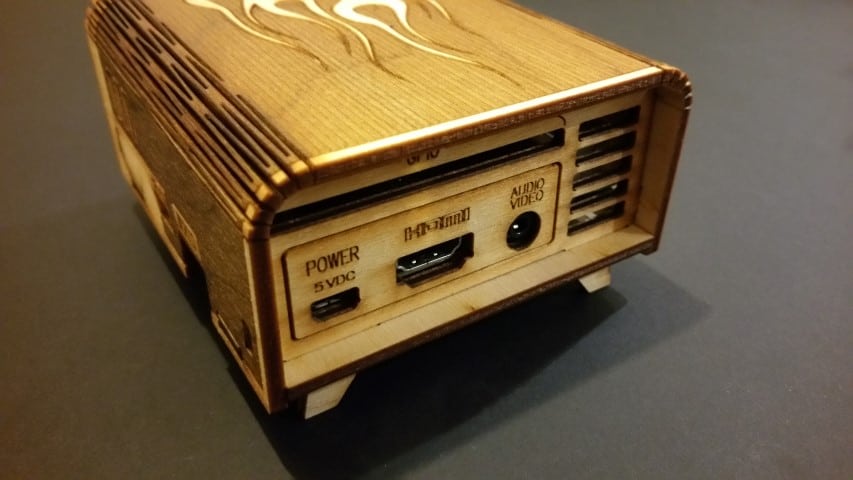 Check out the rear – engraved labels and even a little vent.

Interestingly, this is the second version of the Bel-aire after they updated the design following customer suggestions. A company that listens to customers in 2015? Shocker!

Here’s a video of me assembling the Bel-Aire:

Another case to break all the rules, but from a completely different angle: 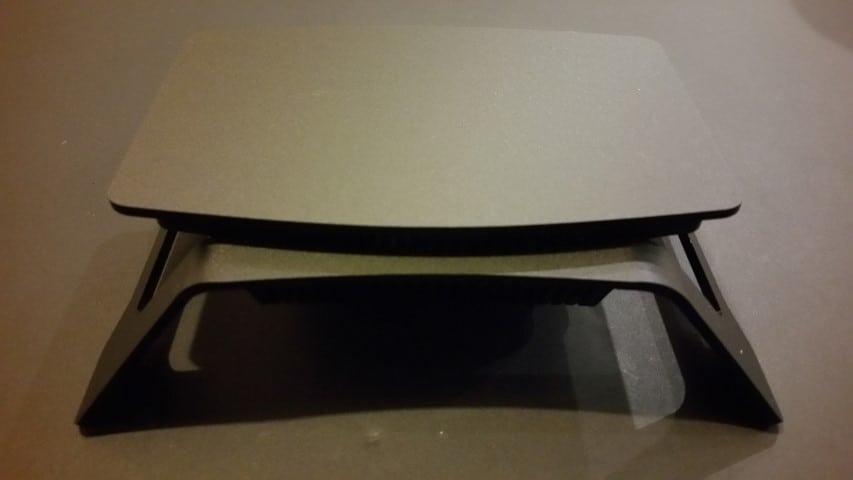 Unlike the attention-grabbing Bel-Aire, the Invasion goes for the slick, subtle and almost disguised approach. Whilst it’s larger than most Pi cases out there on the market, the smooth matt black finish and understated lines will make this a great choice for people who want their Pi Media Centre to ‘fit in’ amongst their other AV boxes.

The fan mount option will also attract the overclockers out there, however the cooling debate for the Pi remains an area of contention. I can see some fun to be had coding the fan to come on when the Pi hits certain temperatures: 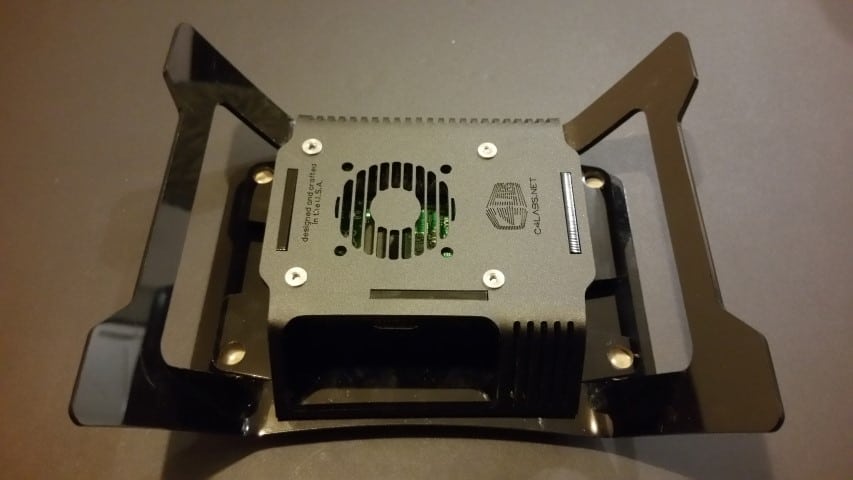 Interestingly, it didn’t start life as a Raspberry Pi case. The outline shape was originally a product stand that C4Labs designed for a local store display business – however the wife of the C4Lab’s designer saw potential in it as a Pi case…so that’s what they did! 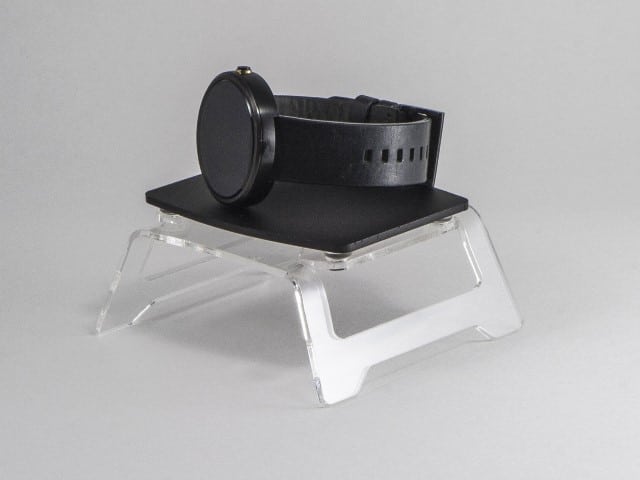 This is how the Invasion started out…a display stand!

Here’s a video of me assembling the Invasion:

The Pi Borg Plus

Not to be confused with the robotics gurus over at PiBorg.org, the Pi Borg Plus is another all-wood case, this time made out of Philippine Mahogany plywood – how posh: 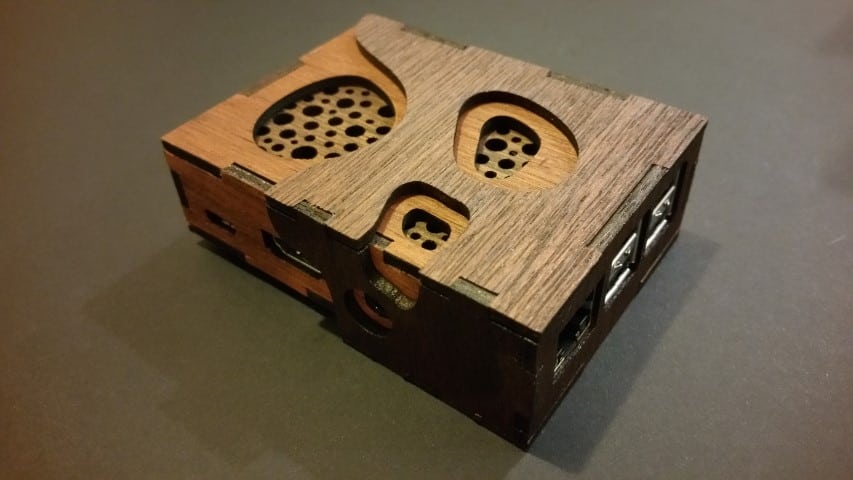 Looking like it grew from a seed, it’s got ‘woodland’ written all over this one. Great for all you hippy tree-hugging programmers out there. It comes pre-assembled and ready to slap your B+ or Pi2 in (and maybe even your old Pi – see the video), and smells like fireworks night!

Here’s a video of me assembling the Pi Borg Plus – it’s a nice easy one to put together:

The Zebra is C4Lab’s line of more traditional Raspberry Pi cases. Layered cases are all the rage in the Pi scene, so no wonder Dustin was keen to create a good line-up of these: 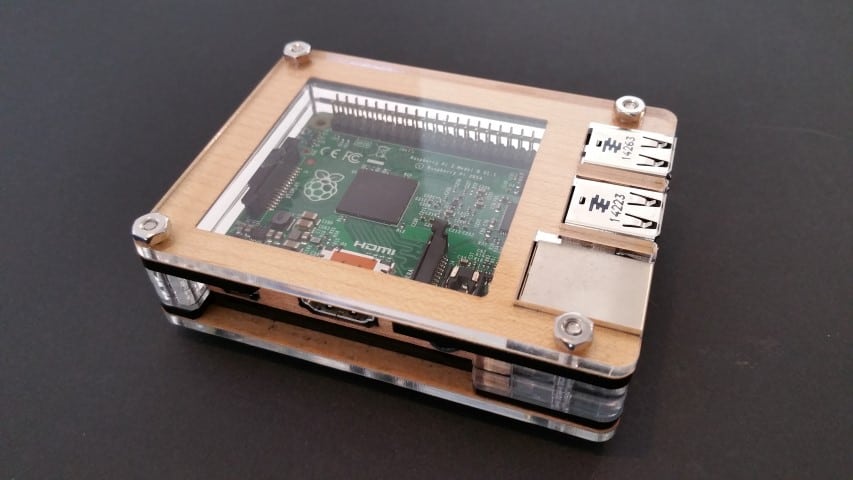 Whilst they do offer ‘Laser Lime’ and ‘Tropical’ colour options (and others), what I like here is that they haven’t completely abandoned their wood case “roots” (get it?), adding their unique C4Labs touch by making a number of wood options.

Here’s a video of me assembling the Zebra:

Similar to the original Zebra above in many ways, but refined as part of customer feedback. The updated version of the Zebra includes a few subtle changes further improving the design: 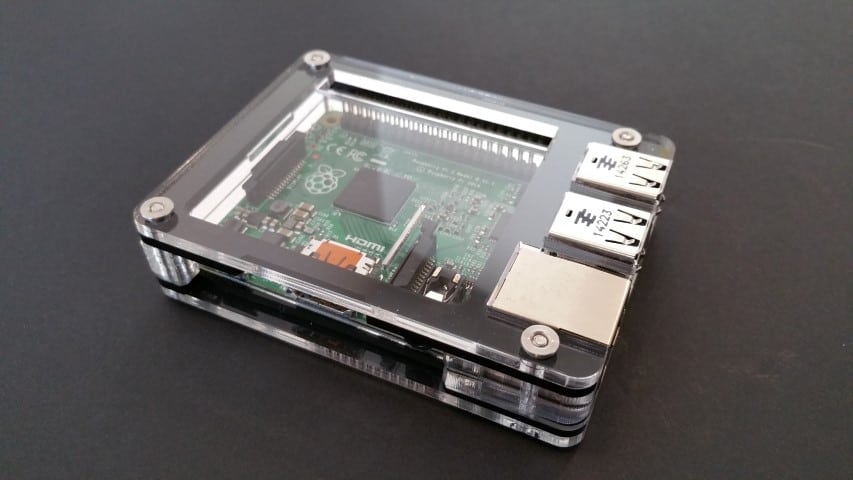 It sports new custom fixings to add to the flush finish, and cut-outs for the GPIO and CSI/DSI belts. The Zebra also now includes free heat sinks with holes on the case to accommodate them: 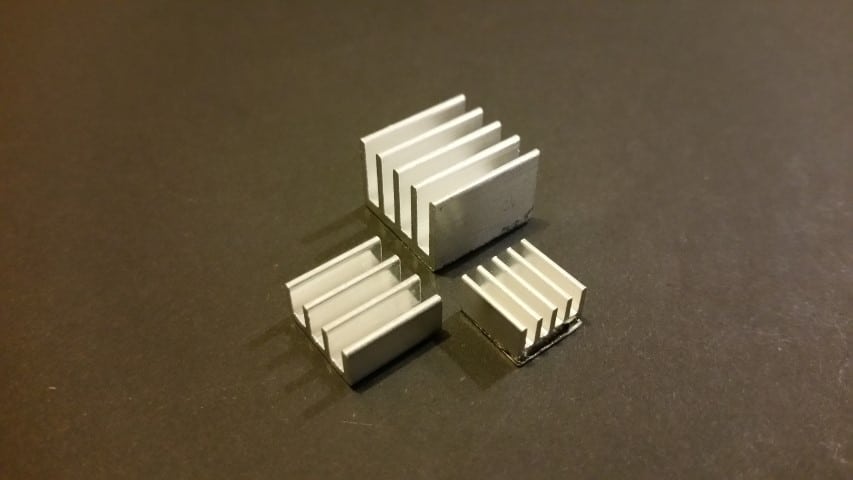 A full set of heat sinks comes with the updated Zebra cases, and also the Invasion case.

Here’s a video of me assembling the Zebra update:

You can guess two things from the name of this one…

Yes the Zebra VESA is exactly what it says – it’s a VESA mount for your Raspberry Pi A+, B+ or Pi2, but can also be attached to the line of Zebra cases. You can either use the mount on its own and keep your Raspberry Pi ‘naked’, or attach the Zebra for a more protected setup: 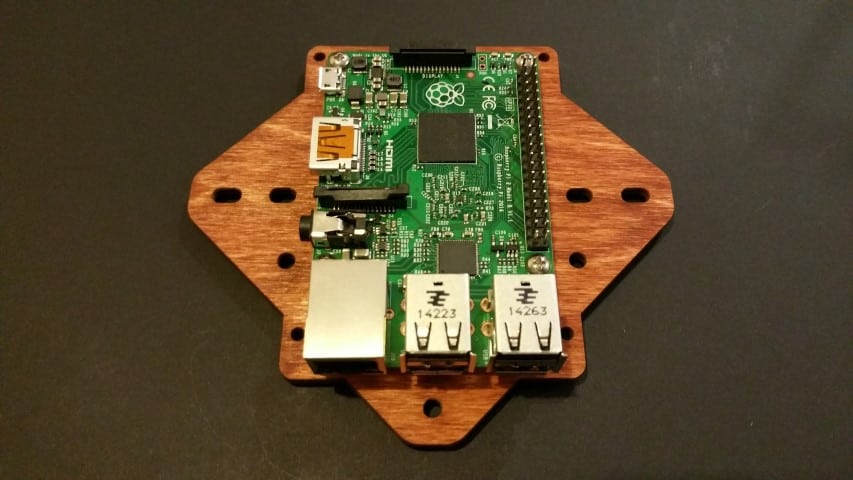 The Zebra VESA is a simple design that keeps your desk tidy and Pi safe.

The important thing to note here is that it’s compatible with 50mm, 75mm and 100mm VESA mount holes. Nearly all monitors will be covered, but just check your measurements if you plan to use these with a full size TV.

I have three of these: clear acrylic, black acrylic and wood. It’s a simple design but very effective in giving you a nice clear desk, especially if you’re not using the GPIO.

Here’s a video of the Zebra VESA:

So, who wants a case then?

I’m giving away FOUR of these cases to lucky random blog subscribers – the Black Ice updated Zebra, the Pi Borg Plus and two VESA mounts!

To enter, you simply need to be an email subscriber of my blog – click here to subscribe. On Sunday 11th October around 13:00 GMT I’ll randomly select 4 lucky winners. Check back here then, or see the winners announced live on my Twitter account.

There will also be another chance to win a case on my Facebook page very soon.