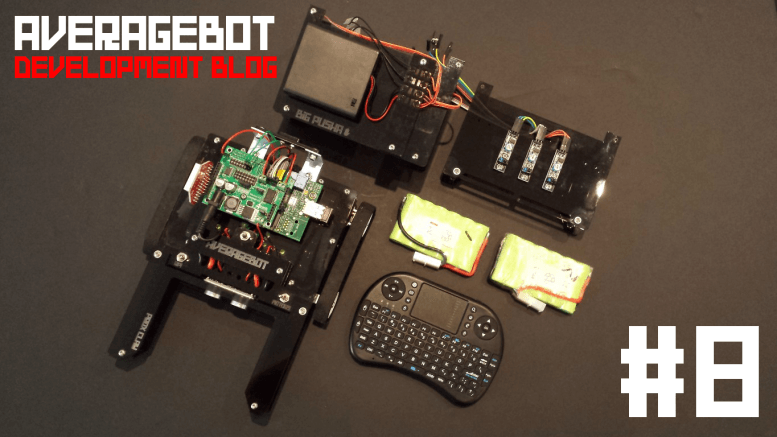 AverageBot is ready for action!

It’s one week to go to Pi Wars, and with AverageBot 98% complete, what better time to give a final update before the competition. To check back on the previous 7 devblogs, click here to go to my PiWars page.

Last week I had just one physical part of the build to complete, a bit of testing/tweaking of my code and of course the mighty task of packing for the day.

Let’s show you the latest…

In my last update I showed you my partially complete skittles challenge attachment – the “BIG PUSHA” – including the panel I had designed as the pushing paddle.

I had the paddle laser cut this week at MakersCAFE, which means the attachment is now complete and working as designed, despite having no confidence that the servos would work together in harmony. 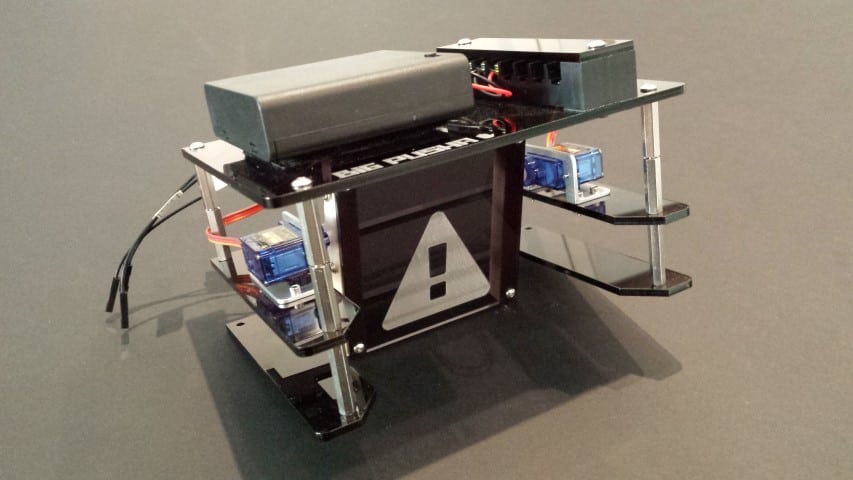 Batteries on top, servos underneath – this is one hefty attachment!

I do have to make sure the servo power is only turned on once my code is running, otherwise they seem to default to different positions that would either break the servos or snap the attachment.

Here’s a video I posted to Twitter of the attachment showing it in action:

Messing around with AverageBot. Going to add some slower turning speeds to this program, too lively! #PiWars #Mad pic.twitter.com/TAkCYgFasx

The code that runs it is actually very simple, and I explain this in Devblog 6.

There’s a few ways you can control servos with the Raspberry Pi, and I’ve opted for the rough n’ ready GPIO PWM option that produces quite a lot of servo ‘twitching’. The paddle between the servos keeps them still, but I suppose that’s a bit like pinning down a large angry drunk man – something will have to give eventually! 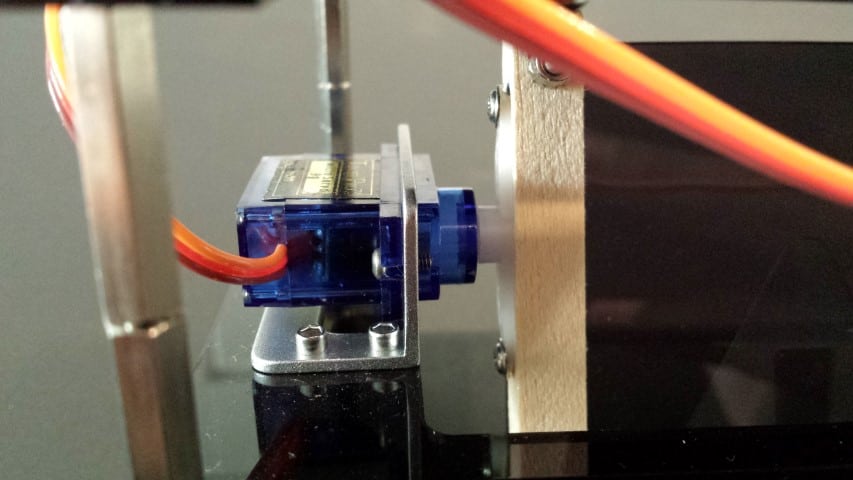 The servos are locked in to the paddle

My only other concern is that I haven’t considered any kind of mechanism to hold the ball once it’s within the mouth of my attachment. My plan here is to move very slowly once I’ve caught the ball, to avoid any bouncing off.

Whilst most of the functions of my robot have been tested many times before, there’s always that thought lingering at the back of your head that you should give everything a final try before packing up and leaving.

I still haven’t done this, having had a busy week at work and also building a Christmas present for one of my family out of an Arduino (more on that once they’ve received it, as they might be reading this!).

I’m going to do most of the testing this evening, which should mostly be SR-04 proximity tuning and checking my speed levels still make the robot run straight.

Just like a holiday abroad, I need to make sure I bring everything I need. With a 1.5+ hour journey to the competition, I can’t afford to leave anything behind. Also similar to a holiday – I still haven’t packed yet, leaving everything to the last minute!

I’ve been using Google Keep to keep a list of things I need to bring. Obvious items are things like my battery charger, a spare Pi, extra batteries, tools, my laptop, the remote control etc.

There are also a lot of less obvious items that are easy to overlook – screws for the different attachments, a soldering iron (you never know), wireless router, super glue, zip ties, blu tack, spare SD cards and more. 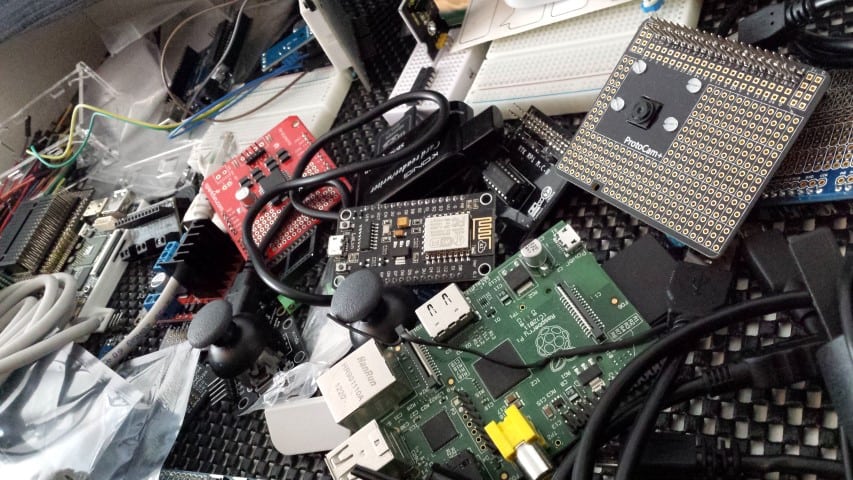 My tidy maker drawer has been destroyed by all this robot preparation!

Luckily there will be a shops like the Pi Hut there as well, who should have decent stock of things like Raspberry Pis, cables and other bits that might be needed. Other competitors are sure to lend items to each other as well, so I would hope there are no missing item dramas on the day.

I received my schedule for AverageBot this week as well, which tells me what time I’m required at each challenge station.

That’s helpful for me to work out where I have a larger gap for changing batteries and attachments, and helpful for the thousands of AverageBot followers that want to follow me on the day…I joke..!

This is what my day looks like – challenges from 15:55 are dependant on me winning the first Pi Noon challenge:

It’s going to be tight considering that I need to change attachments between some of the challenges. I’ve made my own version of the schedule to prompt me to head to the pit:

Whilst this is a competition, it’s not quite as ruthless as the Olympics. No robots will be running on any illegal Russian battery chemistry for a start…*ahem*

Matching the friendly and good-natured Pi community, this competition is all about coming together, sharing ideas, teaching and just having a good time – which of course then inspires the young folk to get involved.

If you want to see who else is in the competition and what they’re bringing on the day (some are still top secret!), check out the competitor list link below. AverageBot has some stiff competition!

Whilst this blog is the final entry for the blogging challenge for Pi Wars, I will of course be writing a final blog sharing my experiences and performance on the day. Who knows, maybe I won’t come last in something?

Also in my next and final Pi Wars blog, I’ll be sharing my complete code and explaining how each section works so that you can use parts on your own project. I’ll also aim to price up my robot, which I’m sure will be a bit scary as I’ve been bleeding cash on a daily basis on parts and laser cutting!

I’ll get as many pictures as I can on the day, but I get the feeling I might be too busy. Luckily @mruktechreviews will be shooting an official video which should summarise the day well – here’s his video from the previous competition (although I don’t think this was officially planned last year so expect even more this time!):

That’s all folks. Time’s up!

I have a course and exam to concentrate on next week, so I won’t have any time to work on my robot – hence why I’m testing and packing this weekend.

If I’ve forgotten something or haven’t written code properly, it’s too late, AverageBot is closed for changes!

Here he is ready for the sold out competition: 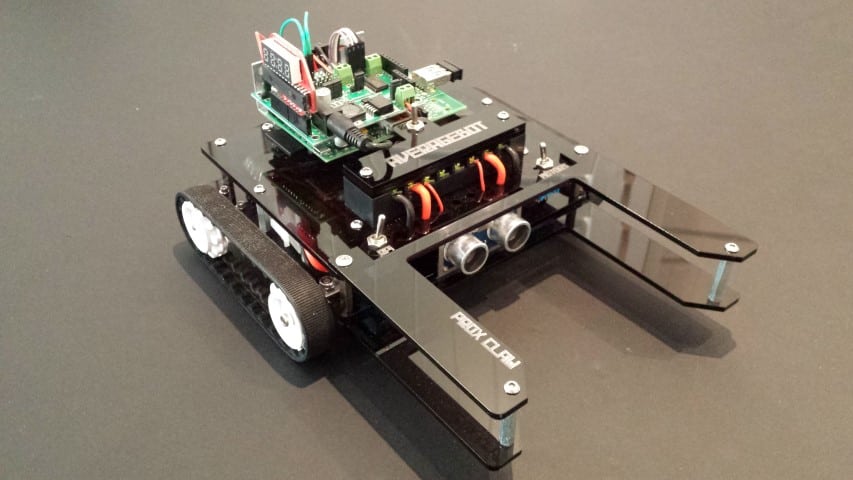 Hopefully I’ll see you there. If you weren’t fast enough to get a ticket, or live in lands far away, keep an eye on the #PiWars hashtag over the competition weekend for real-time updates.

Build a Raspberry Pi Robot for £17!