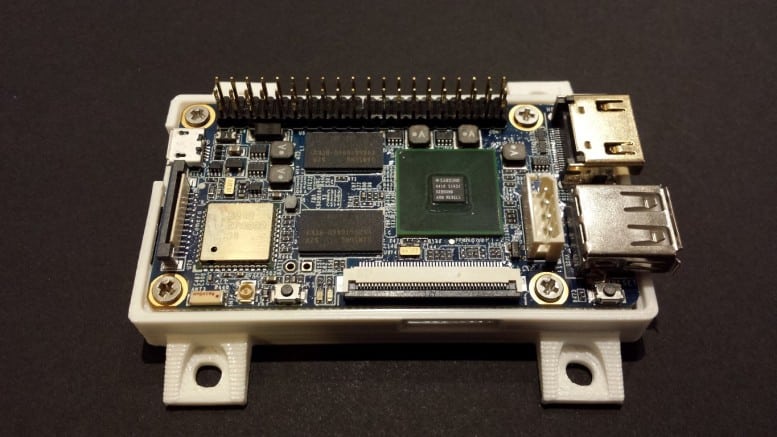 The NanoPi 2 - another Pi-named device to divide the community!

I’m on a bit of a roll with non-Raspberry Pi boards this year. Earlier in 2015 I wrote a post about some Arduino-style boards I was going to play with, followed by a pcDuino post, and then very recently an entry about the popular ESP8266. Now – the NanoPi 2.

Yes this week I took delivery of yet another non-Pi, although this one does seem to share some features of my usual device. This is the NanoPi 2 – a quad-core A9 board boasting some decent specs such as a gig of RAM and on-board WiFi and Bluetooth.

The main feature I was interested in when ordering was the Raspberry Pi style GPIO. Would it work just like the Pi?

I had a lot of other thoughts as well…does the board run Python? What operating system does it use? Will it run Raspbian? Will it have much of a community for support? What do I lose to gain the small form factor? Is copying the Pi’s GPIO taking it into ‘Orange Pi’ copycat territory, or is there enough originality to call this a board in its own right?

Elephant in the room

Some of you might be wondering why I’m risking Raspberry Pi community suicide by even recognising this board. Raspberry Pi wannabe boards are a common sight on the internet, with others such as the Orange Pi really taking the biscuit.

I’d rather talk about this in an unbiased way and give my view, and I’d love to hear your comments on this subject as well. After all, this isn’t a paid feature – we don’t do those!

So…is this a Raspberry Pi rip off? 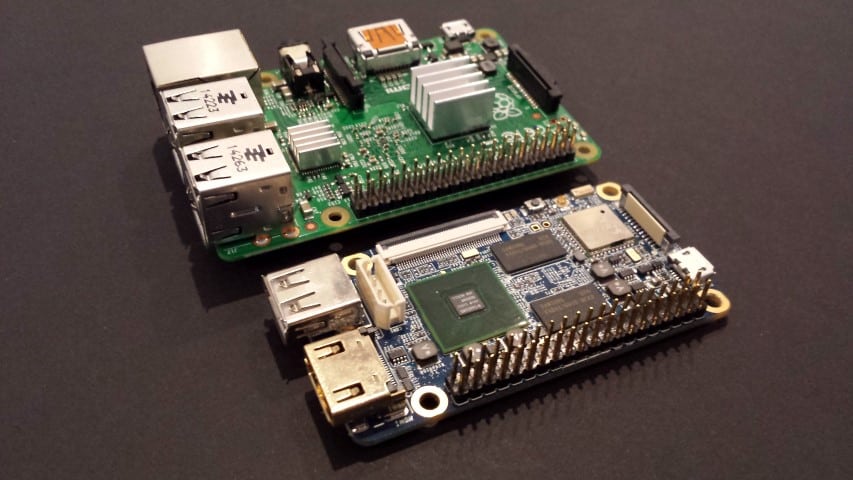 Physically, the only similarity is the GPIO header.

I don’t think the physical side of the board has borrowed anything other than the 40-pin GPIO header from the Raspberry Pi.

As a consumer this was an attraction as I have a comfort and familiarity with the Pi’s GPIO. So yes, they’ve used the Raspberry Pi’s popularity, community and hardware configuration to gain a few more customers here. That’s a little bit naughty, but still not as bad as some copy boards I have seen.

In terms of the name, yes it has ‘Pi’ in it, and yes that also draws you in as a consumer as it links back to our familiar friend. I found an interesting conversation on this, surprisingly on the Raspberry Pi forums – https://www.raspberrypi.org/forums/viewtopic.php?f=62&t=117308.

The manufacturers supposedly see the Pi naming as a credit to the original, kind of like a tribute to the ‘master’. Or maybe that’s a story made up to keep legal people off their back? 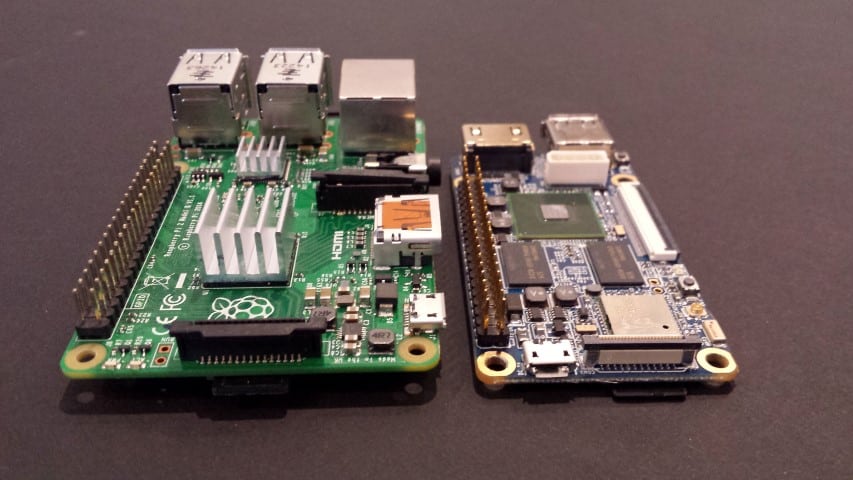 Again from this view, the GPIO is the only noticeable matching feature.

Who knows – but what I do know is that this is probably one of the less offensive boards to come out and attempt to link with the Pi, with the GPIO and name being the only link that I can see.

What do you think? Add a comment – let’s get a debate going (and keep it clean you animals).

This is an interesting area to discuss considering some assumptions you may have made on price.

The NanoPi 2 board (no cables) is yours for $32 – that’s about £21 at the time of writing. That sounds really competitive until you add it to the site’s shopping cart…and then $30 is added for shipping!

At a combined cost of $62/£41, the usual theme of products being cheap from China kind of goes out of the window. There’s also that thing in your head that reminds you that shipping is almost the same price as the product.

So whilst the NanoPi 2 comes with more hardware features – you are paying for them.

I don’t want to move on to hardware and software without showing you how the board is delivered. 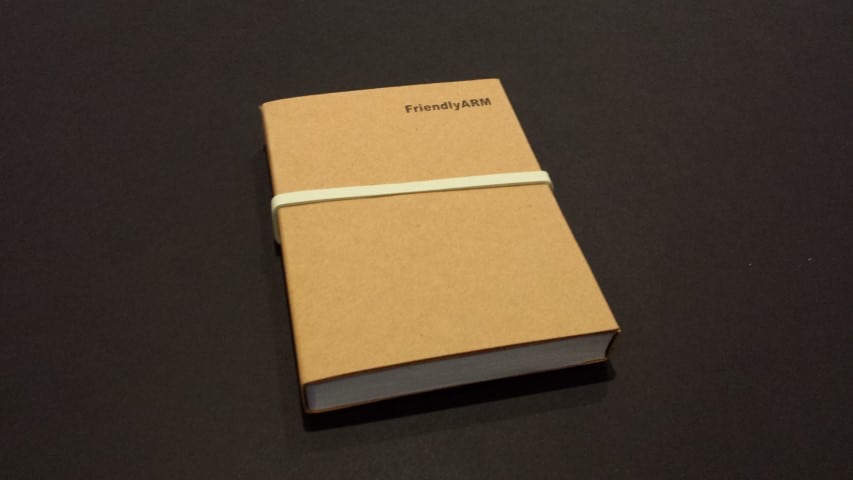 The NanoPi 2 comes in a small minimalist cardboard box

They’ve put some good effort into the presentation of the board, something you don’t see a lot of. My Raspberry Pi and pcDuino just came in a simple box, and my copy Arduino just came loose in an anti-static bag.

The NanoPi 2 is shipped in a reasonably minimalistic box, hiding the quality layout inside. After removing the securing rubber band, the box opens ‘book style’ presenting a GPIO pinout printed on the left inner and a cut-out section on the right. 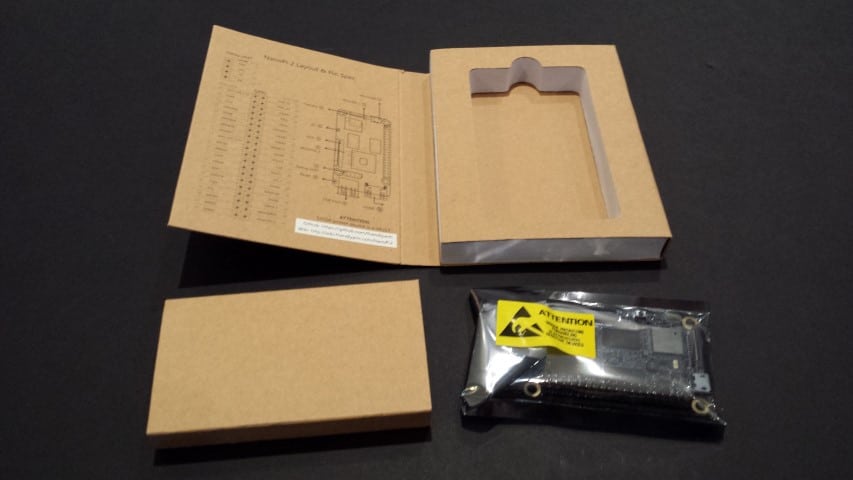 Open the cut section and your NanoPi 2 is resting inside within an anti-static bag. The whole things feels a bit ‘new smartphone’ which I really like.

Other board makers – take note – this is how it should be done!

With the copyright discussion over, let’s take a look at the hardware. You’ll find the NanoPi 2 actually offers a bit more than the Raspberry Pi in terms of features – but these come at a (non-financial) price…

Areas that got my attention are:

The only thing worth mentioning here is that FriendlyARM recommend a class 10 SD card – something I’ve not seen with other boards. 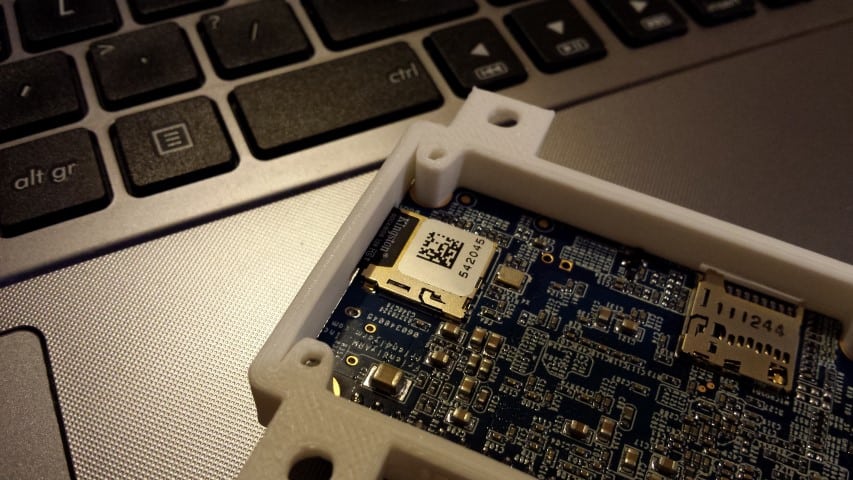 The impressive list of features is all well and good until you need to give it some juice. With the extra SD cards, WiFi, Bluetooth and other features, you can’t get away with a wimpy power supply. FriendlyARM recommend no less than a 2A supply (5V), which means some of the PSUs you already have might not be up to the job.

There are also a few opinions on the internet that this is a big of a hungry boy – so perhaps not ideal for mobile projects, but it’s not something I’ve tested yet.

I’m most at home when using Raspbian with Python for my projects, because the Pi was the first micro computer I used. So when this board lured me in with its friendly and familiar Pi-style GPIO header, I kind of forgot to check what system it ran.

The NanoPi 2 accomodates Debian (Linux) and Android. Whilst using Android will have it’s own world of fun, I have no idea how/if Android can make use of Python and the GPIO pins.

Debian on the other hand sounds a little more suitable, simply because it’s Linux like the Pi (Raspbian is based on Debian too). 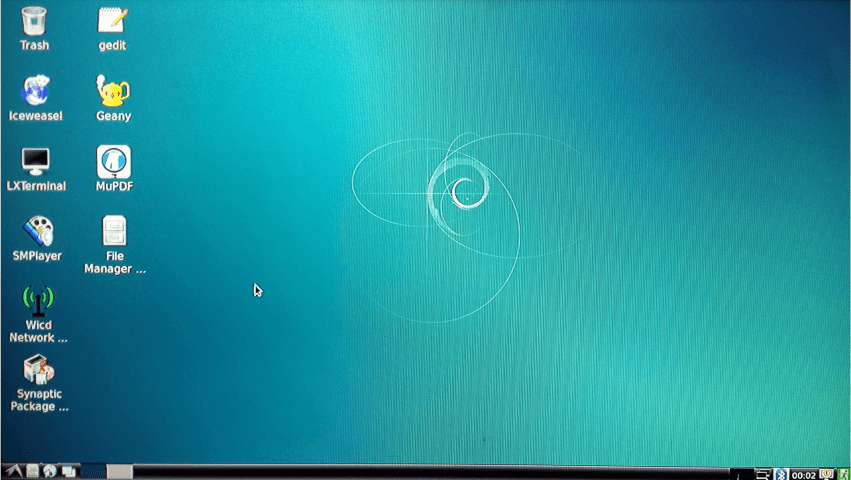 This is the Debian desktop for the NanoPi 2

I thought it would be worth talking about the setup, as I know a lot of you will be interested in differences to the Raspberry Pi.

Setting up the operating system is similar to the Raspberry Pi – download an image, burn it to an SD card and plug it in:

I had an issue getting the Debian image due to the ultra-slow download speeds. I’m actually trying to download it as I write this line – it’s been running for an hour, has 43.5Mb downloaded, and estimates 9 hours left! That’s quite poor in 2015, especially considering the many free hosting options available.

Eventually it finished downloading the 696MB image after about 4 hours, so not as bad as estimated. I informed FriendlyARM who told me they’re working on improving their speeds.

When the image has finally downloaded, the SD writing is very straight forward. I used Win32DiskImager that I had used many times before, and is also recommended in the setup guide. 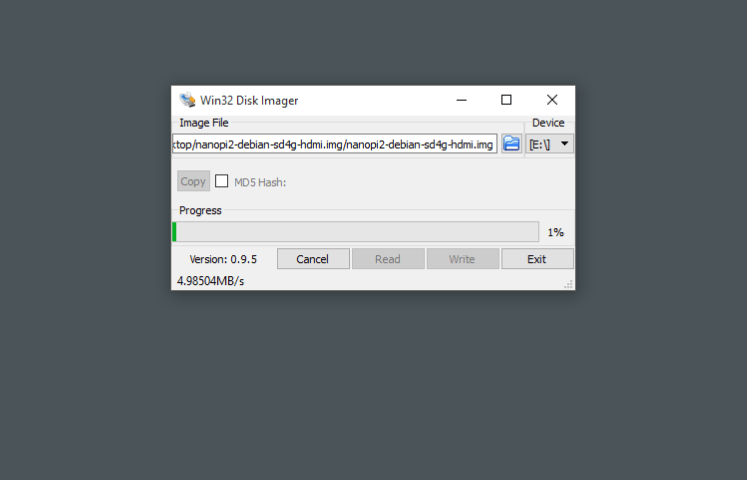 With the image inserted into SD slot 1 (the boot slot), I plugged in the HDMI cable from my TV and powered up the Nano. Debian booted up as expected and was ready to roll – no issues there.

I then tried a few tools that I use regularly with my Raspberry Pi – FileZilla FTP, Putty Terminal Emulator and VNC.

All of these tools worked as expected with the default user/passwords provided. VNC was already installed and running which made it easy to start using it headless. 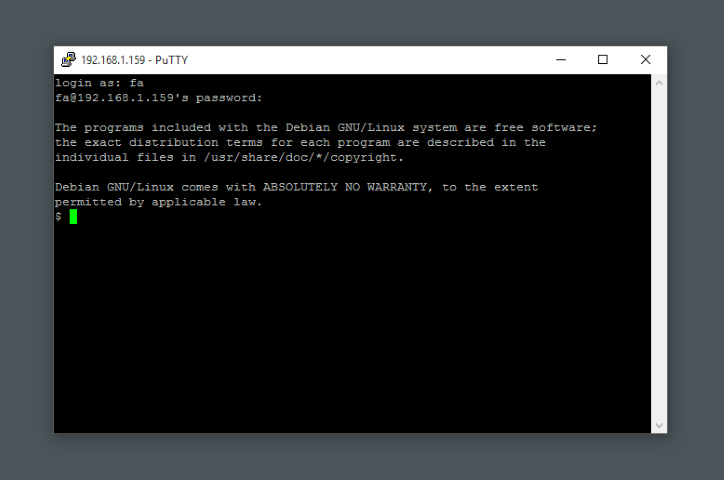 With the software side sorted, I thought I’d try a basic project to see just how similar the NanoPi 2 GPIO is to the Raspberry Pi. If it’s as compatible as they say, then this simple RyanTeck TrafficHAT board should work just fine. 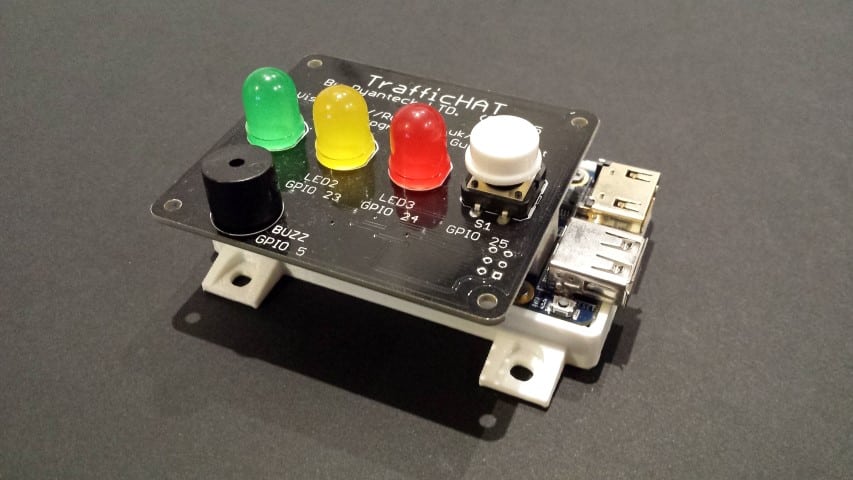 An immediate issue I identified was that anything with ‘RPi’ in the name surely wouldn’t work – yes I’m talking about RPi.GPIO! So, how to use the GPIO pins then?

Failing to find anything on the NanoPi site, I searched and found a GPIO interface here that looked like what I needed. But how to install that?

More searching, questions and trying a few things without much luck. I went in so many loops and circles that it’s hard to even describe what I tried and what didn’t work. I recall having an issue around not having ‘setuptools’ installed, and when trying to install that I got ‘bootstrap certificates not yet activated’. 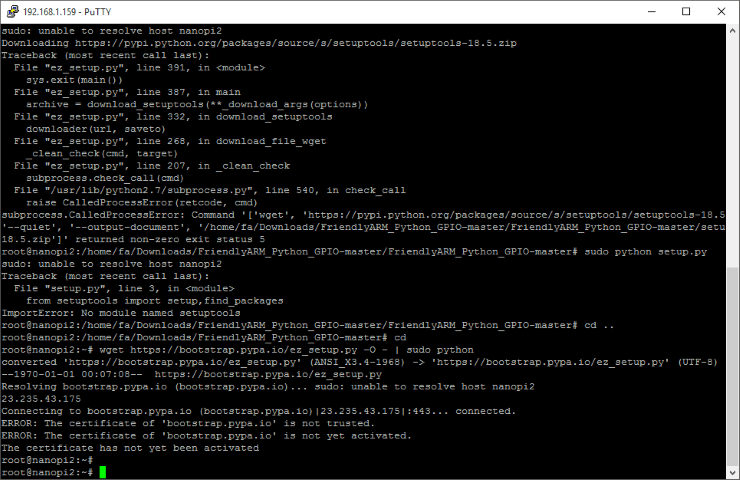 Then I found out, only by emailing the Git owner, that this GPIO interface wasn’t for the NanoPi 2! Maybe Google isn’t my friend after all?!

I stopped there. It was getting late, I was getting impatient, and all the while I was gaining a lot of respect for my Raspberry Pi and how we take its ease of use for granted. Surely using the GPIO should be much easier than this – especially as the Raspberry Pi compatibility is a key selling point?

If this lack of success shows anything, it’s that if these other boards want to get in on this market they need to put a lot more effort into making things like this clear, easy and simple for Linux beginners like me.

The NanoPi 2 feels like a powerful piece of hardware that might just be trapped with the two common killers of new boards on the market:

As someone mentioned in the forum conversation, it’s unfortunate that they decided to use ‘Pi’ in the name. It instantly turns off those loyal to the original Pi, but at the same time attracts people like me who are just interested in finding new boards with a familiar configuration.

The thing is, it could probably just stand up with its own name as a decent competitor. You can’t ignore the convenience of built-in WiFi and Bluetooth, and it certainly isn’t lacking any grunt to keep up with the most demanding projects.

Price-wise it’s not blowing anyone away. You’re paying £10 more than the Pi overall for the added hardware features – this is no cheapo Chinese affair. 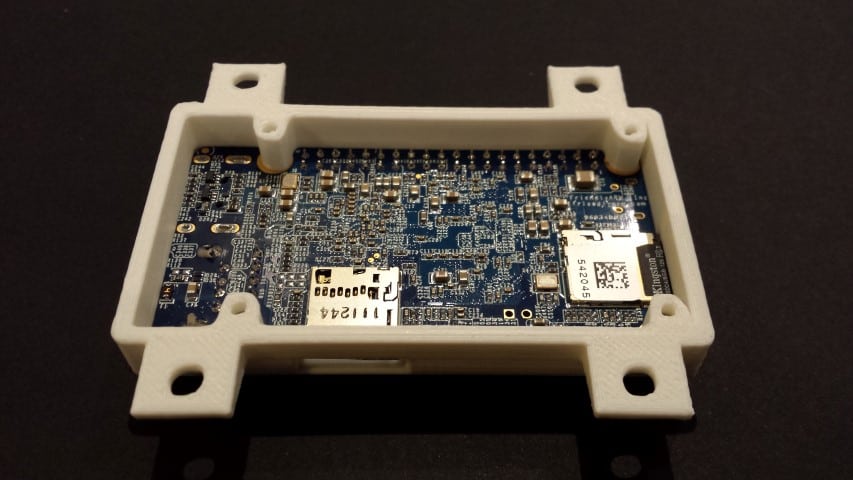 Impressive hardware credentials packed in to a tiny board…but without the community of support, how much can you use it?

The final kicker however, will always be ‘Community support’. You simply cannot match the Google-ability of the Raspberry Pi, with any question answered within minutes just by searching or asking online. Compare that to the issues I had trying to get something as simple as GPIO working on the NanoPi and you can see where it falls over.

You have to give them credit for the decent website and documentation when compared to other Chinese boards, but it feels like they still have a long way to go.

If you enjoy a challenge or are comfortable with Linux and all this messy terminal stuff, this could be the board for you. Beginners…maybe wait until a few more people have used and documented projects for this one.

I have an extra NanoPi 2 up for grabs for you to make your own opinions on the board – and maybe even a cool project too! An extra little bonus is this tidy 3D printed mount that comes with it: 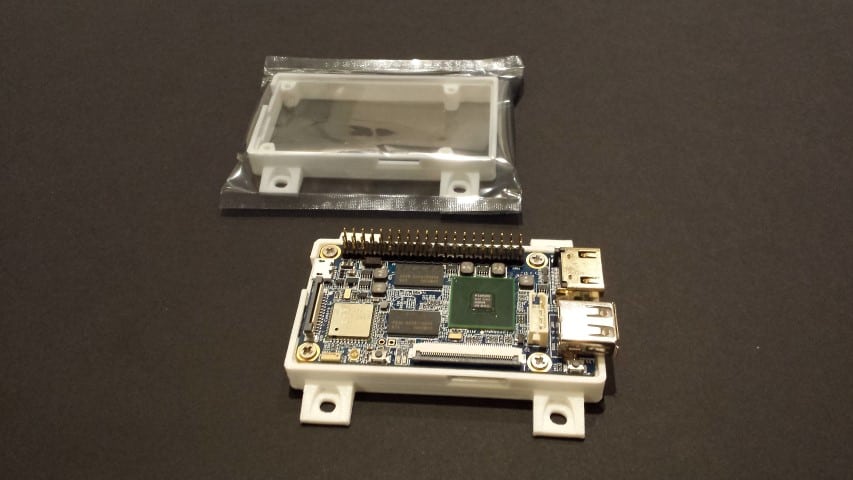 As always, to be in with a chance of winning you simply need to be an email subscriber of my blog.

I’ll pick a random subscriber on Saturday 28th November (PM UK time). An email will be sent to the winner and updated here too – so be sure to check your spam folder!

Update – the winner is subscriber (export row) #601 – Gerard Spierin! Congratulations Gerard – an email is on its way.

9 Comments on "NanoPi 2 from FriendlyARM"