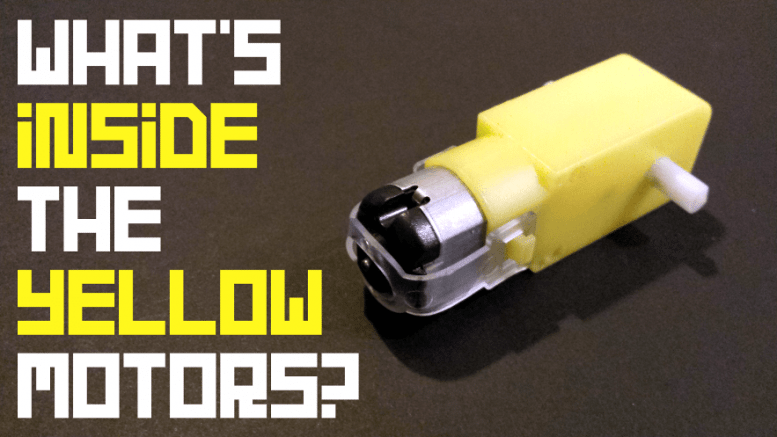 I just had to know!

Like a lot of people, my interest in this scene of ‘hacking and making’ came from a childhood of taking things apart. Old CD players, broken toasters, remote controls and pretty much anything I could get my hands on.

That natural curiosity doesn’t fade with age, so when it came to packing away my robotics parts this week I realised I’d never seen the insides of the generic plastic yellow motors you see everywhere. As far as I know these are simply known as ‘yellow motors’ – the ones commonly used in Arduino and Raspberry Pi robot kits.

I tried to ignore this urge as I knew it would likely result in a broken motor…but it got the better of me! As well as the physical inners, there’s also a lot of mystery around the specification of these motors due to most of them being poorly documented. This all added to my thirst for destruction!

In this post I’ll show you what’s inside these motors, step-by-step as I take it apart. For the record, I did break the motor doing this, so maybe this will satisfy your curiosity and help save a few motors out there!

Rather than opt for the ‘smack it with a hammer and see what comes out’ approach, I’ve been rather civilised in the destruction of this helpless motor.

To peek inside I used a screwdriver and some long nose pliers (the knife and snips weren’t required). 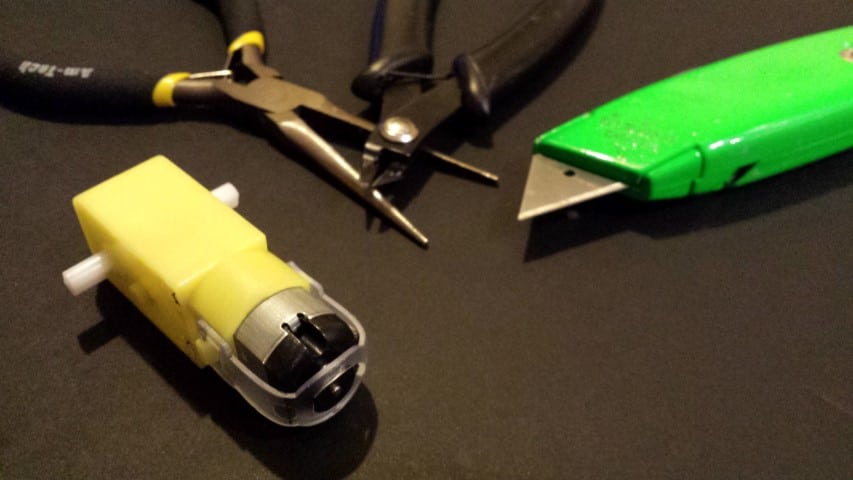 First of all I removed the rubbery clip that holds the motor into the plastic gearbox: 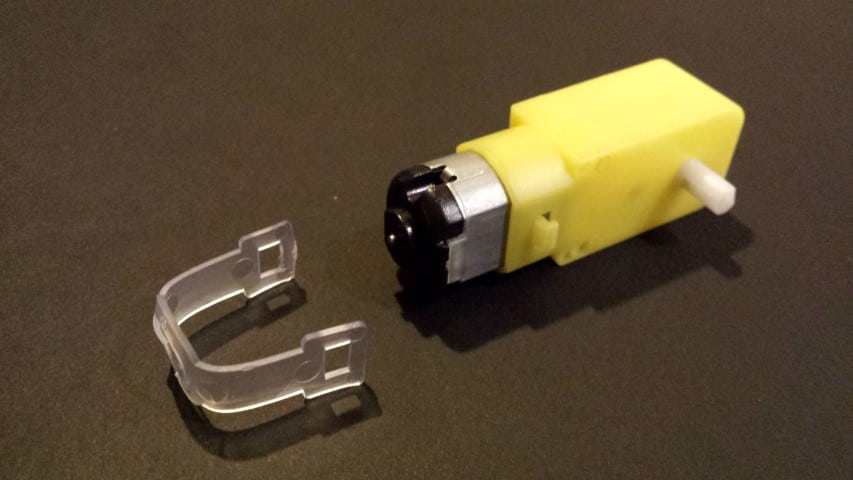 Not the most exciting of starts…

Next I removed the two side screws. I assumed these just held all the gearbox parts together: 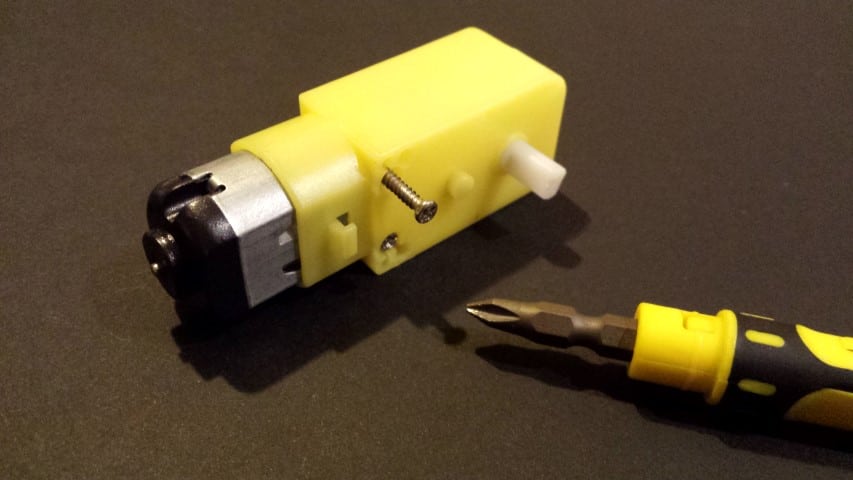 If this gets too exciting for you just let me know…

I removed the motor next. It’s just a standard small motor you see used in many applications. A bit of an anti-climax! 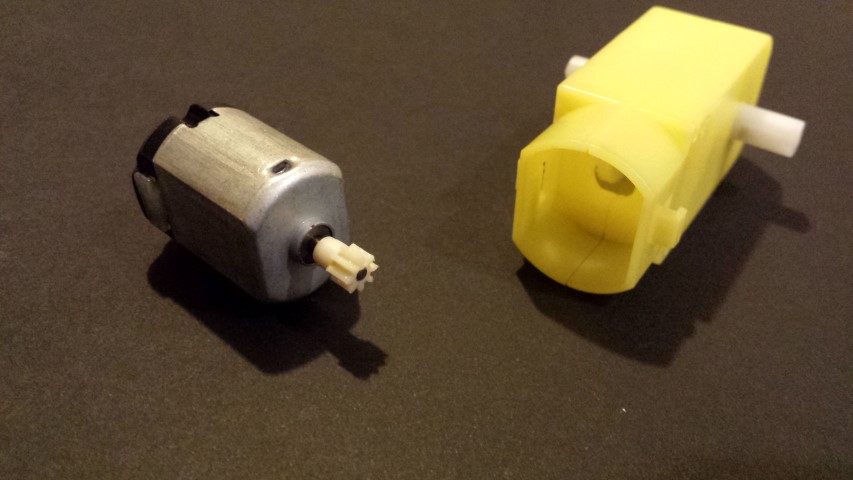 Please try to stay calm during this fascinating blog post…

With the screws removed I split the gearbox chassis to reveal a collection of plastic (nylon?) gears attached to shafts: 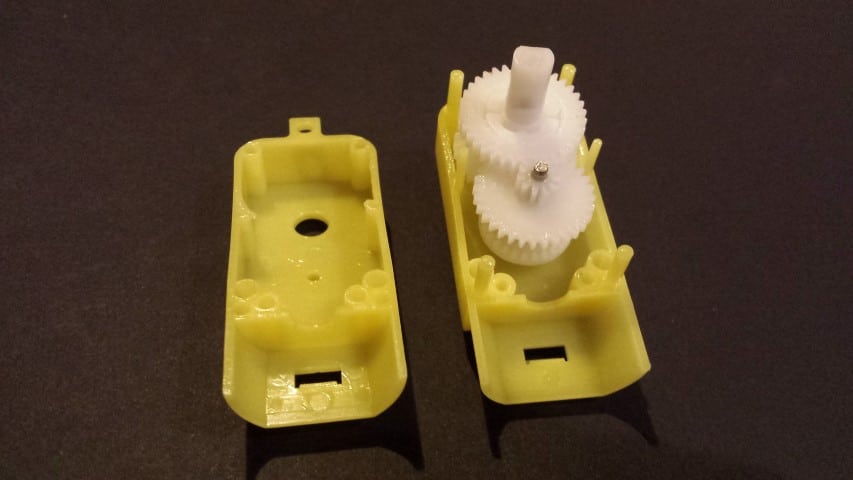 This is what I wanted to see, the guts!

The gears didn’t want to budge using just my hands, so I got stuck in with my pliers. I heard a short “CRACK” (whoops) and the gears were free from the chassis. I did break the chassis here – you can see a small yellow section still holding on to the shaft: 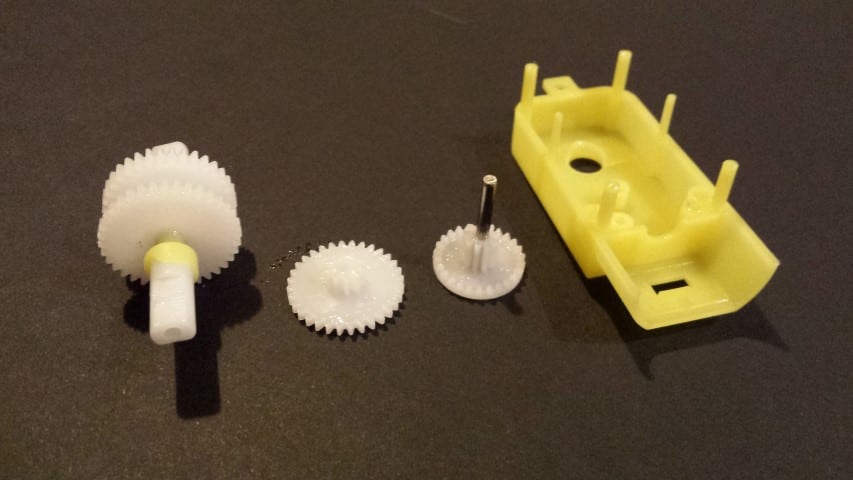 I nearly stopped there, but then I noticed that the motor had little tabs that could be removed, possibly letting me inside. I removed the motor’s pinion gear, pried the tabs open and removed the cap: 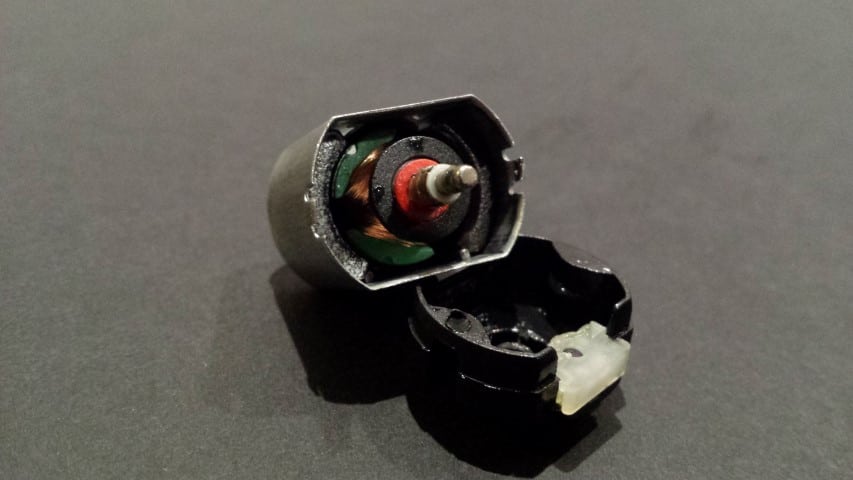 Remembering how motors work from my RC hobby as a youth, I pulled out the rotor and revealed the best looking part of the destruction so far: 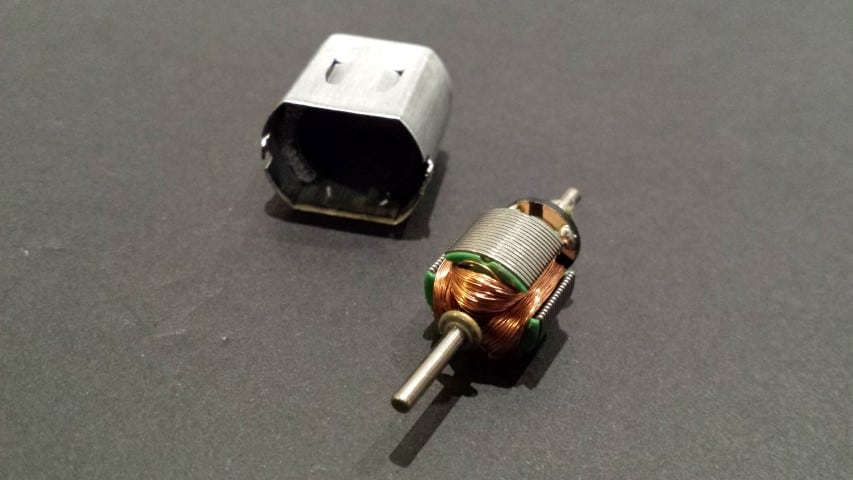 Ahh that feels GOOD! With the motor in pieces I could destroy no further: 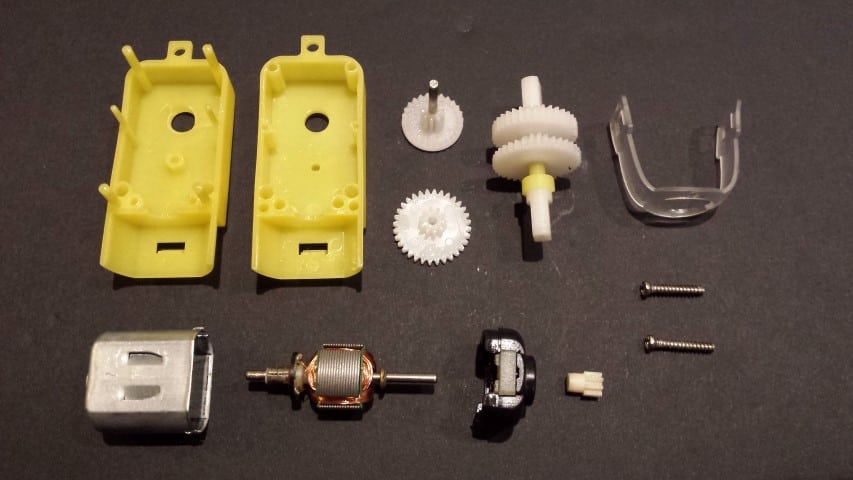 All the parts that make up a cheap yellow robot motor. This is what I wanted to see.

Curiosity might have killed the cat, but the Average man lives on!

I suppose this is a bit of an odd post from me as I usually cover projects or something else to do with the Raspberry Pi. However I wanted to share this as I hadn’t come across anything online showing the guts of one of these yellow motors, and I just know there’s a handful of you out there as curious as me!

I guess I could have Googled a bit longer and found a similar image, but if you’re anything like me you’ll know there’s nothing quite like tearing things apart yourself.

5 Comments on "What’s Inside The Yellow Motors?"