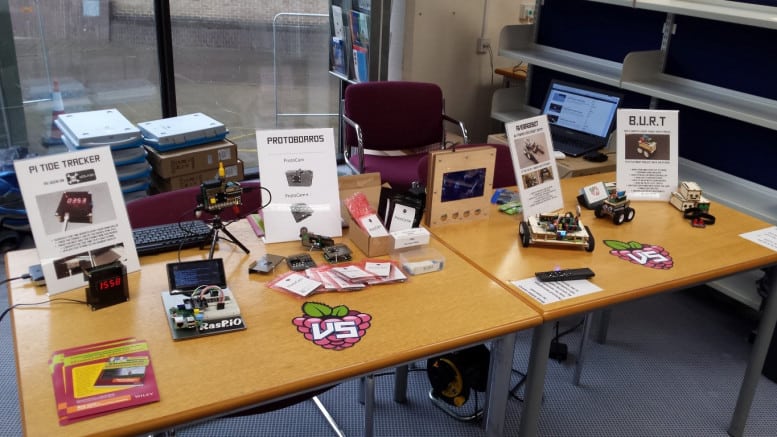 I had some of my recent projects on show, including my BURT robot

Another week another Raspberry Jam. I made a promise to myself to attend more events this year and so far I’m well on track. I’ve attended the Egham Jam, the first ever Kent Raspberry Jam and now Chelmsford’s second event.

Chelmsford is around 40 minutes from my home town of Southend, and also the same city (it’s now a city) that I play ice hockey in on Sunday nights.

The event stuck to the traditional format (if there is such a thing) with good mix of learning areas, workshops, talks, show n’ tells and sellers dotted around the venue.

The Chelmsford Raspberry Jam was held in the city’s huge central library, which offered a large floor area all to ourselves with separate rooms for different activities. With ample multi-story parking next door to the building, getting there was hassle free. 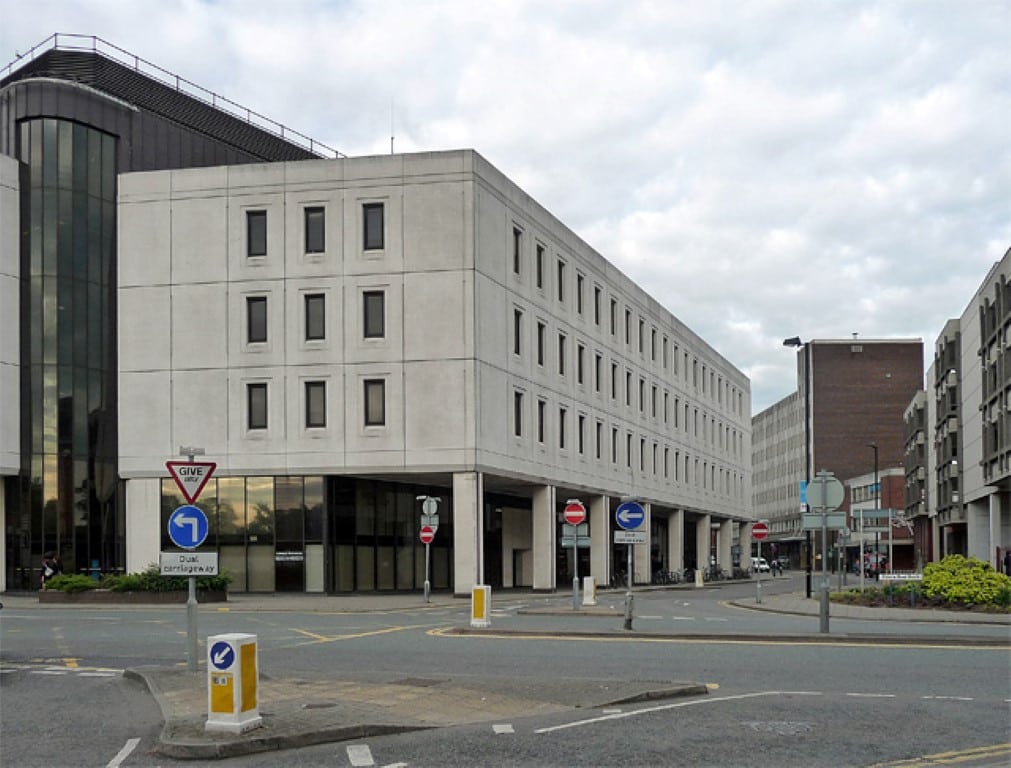 Once again I spent most of my day at my show n’ tell stand talking to fellow geeks and makers, showing off my BURT robot and other projects. I love meeting readers and having a good chat about all things Pi, but of course this limits the amount of time I can spend wandering around myself.

I did get a few chances to nip out though, and here are some of my favourites…

The show n’ tell stall next to me had a very rare sight just casually laying on the table: 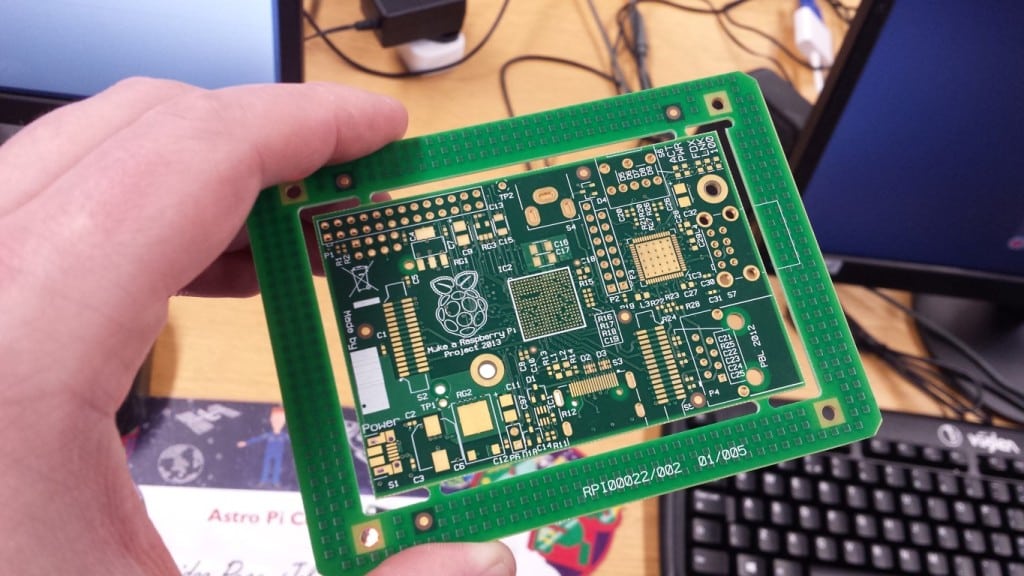 The front of the unpopulated Raspberry Pi PCB

This is a bare Raspberry Pi PCB. No components, completely unpopulated and attached to a PCB frame. These things are the ultimate Pi collector’s prize and something I believe you only get as a prize/reward/gift from the Raspberry Pi Foundation. 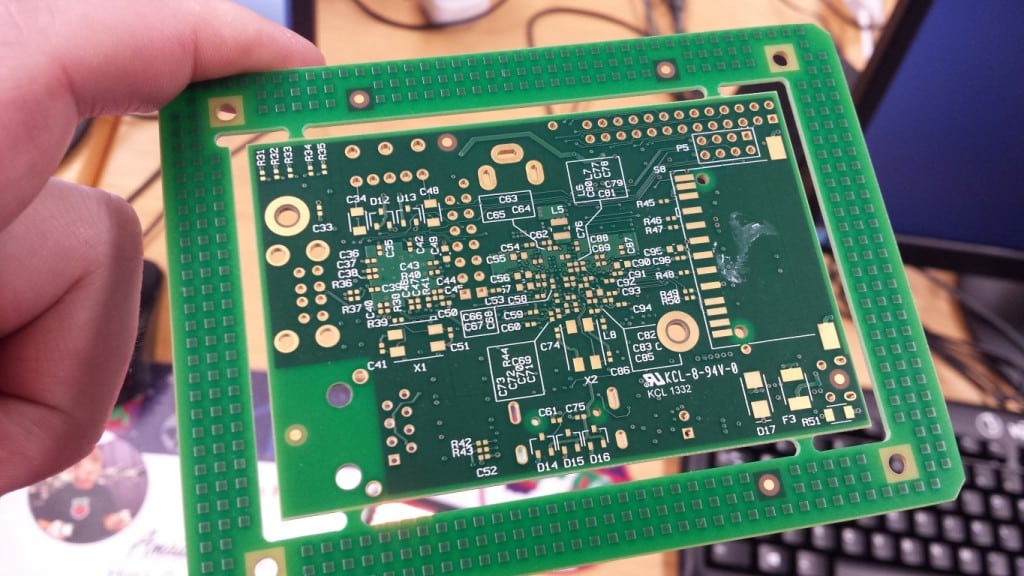 The owner is a young chap known as ‘CrazySqueak‘. He was awarded the PCB for his code submission as part of the Astro Pi competition. CrazySqueak’s code is currently flying in the ISS above our heads waiting to be used by Tim Peak. Cool huh?!

There’s always a really smart person at every Jam, and so far that hasn’t ever been me. This time it was Andrew Lewis with his impressive ‘Crayfish Pi’ setup: 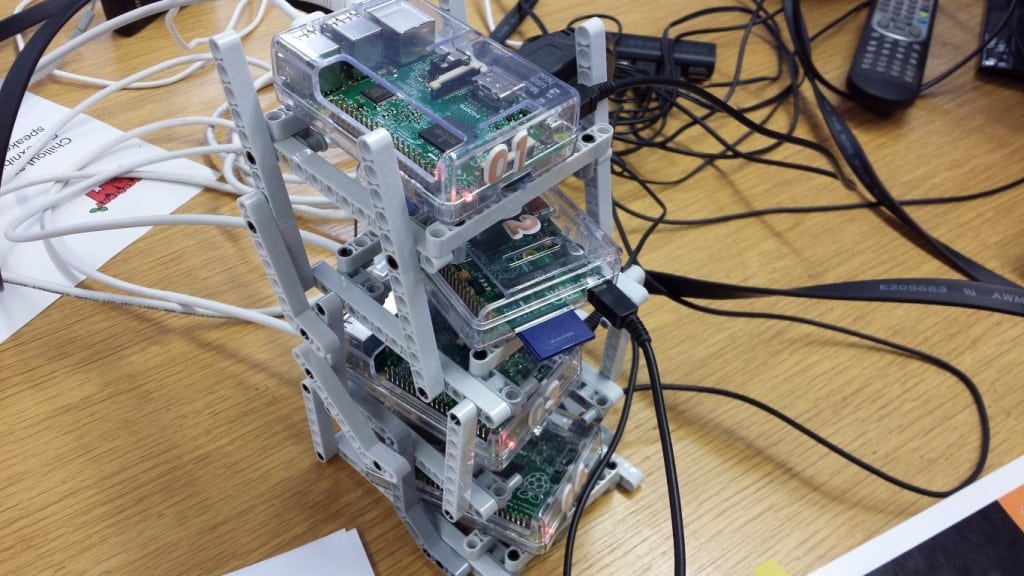 What you see here is 4 ‘clustered’ Raspberry Pis set up a bit like a supercomputer. They were working away calculating separate ranges of prime numbers, reporting their numbers back to a separate main Pi to display the combined results on screen. 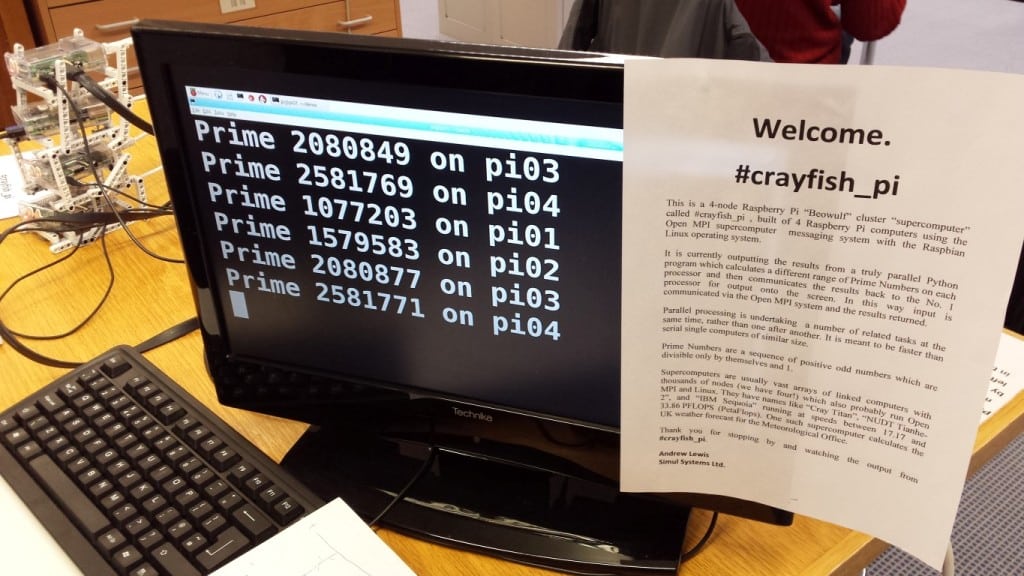 This might seem pointless until you realise that you can apply this processing power to all sorts of things. Andrew caught my attention when he mentioned that it can be used for predictions. My ticket to the Grand National has been booked already!

For some reason I had failed to notice this new weather station from the Raspberry Pi Foundation. Luckily Jim Darby had brought a prototype of the parts along to share with Essex’ finest geeks: 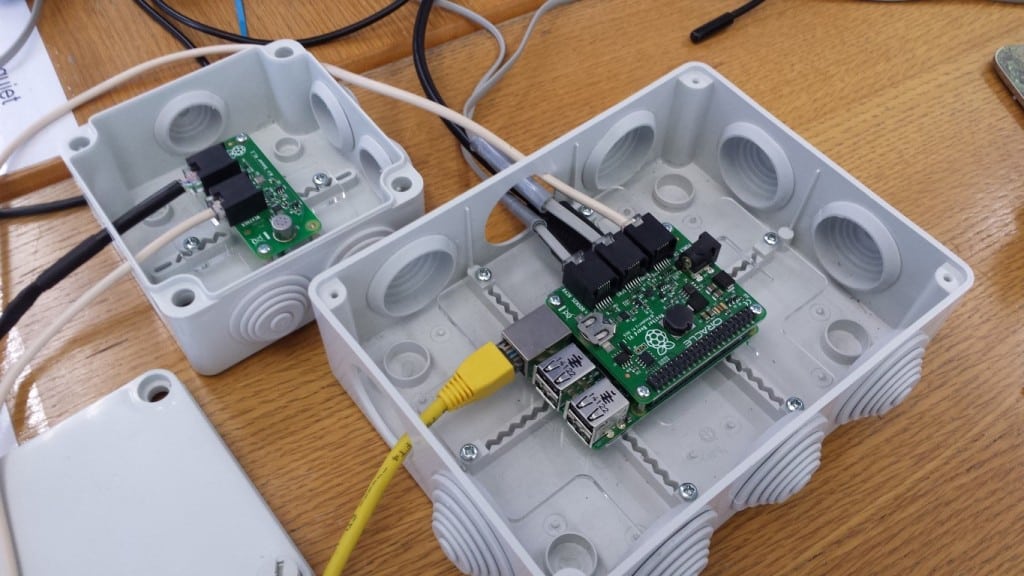 I learnt from Jim that this project was actually the result of a grant from Oracle (you know, the database guys with the red sign), which included the design of the station and also an education programme to go with it – stretching the Foundation’s charity efforts even further.

At the moment it’s a prototype of plastic parts and some sexy looking PCBs, but I understand it’s due for completion very soon. 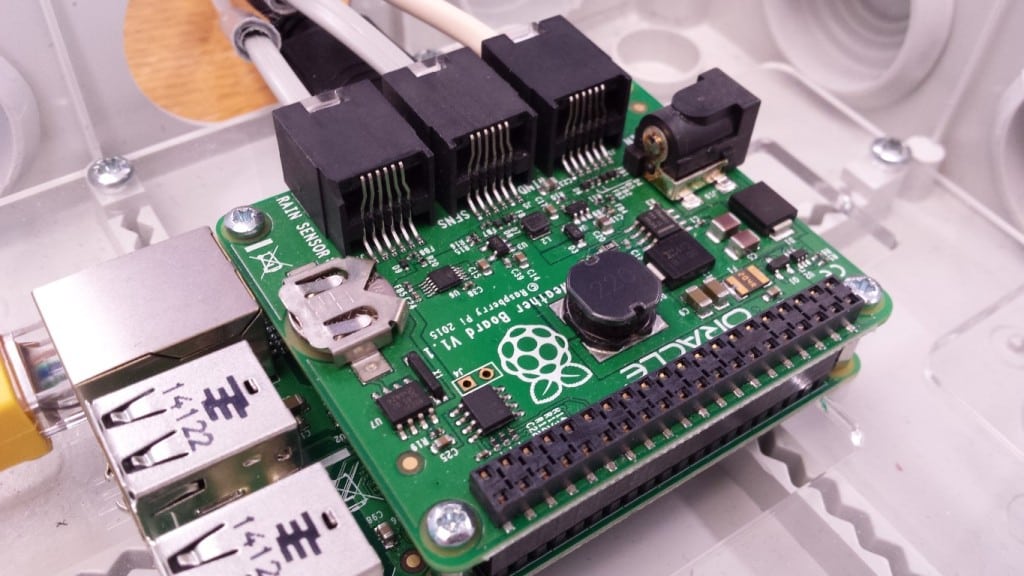 The weather station’s PCB. I’m not 100% on what this part does, but you can bet your ass it’ll be cool if Oracle are involved!

Mark Turner, someone I see regularly at jams with his robot arm projects, came along with a new build he was working on – R2DPi (that’s the name I’m giving it anyway). 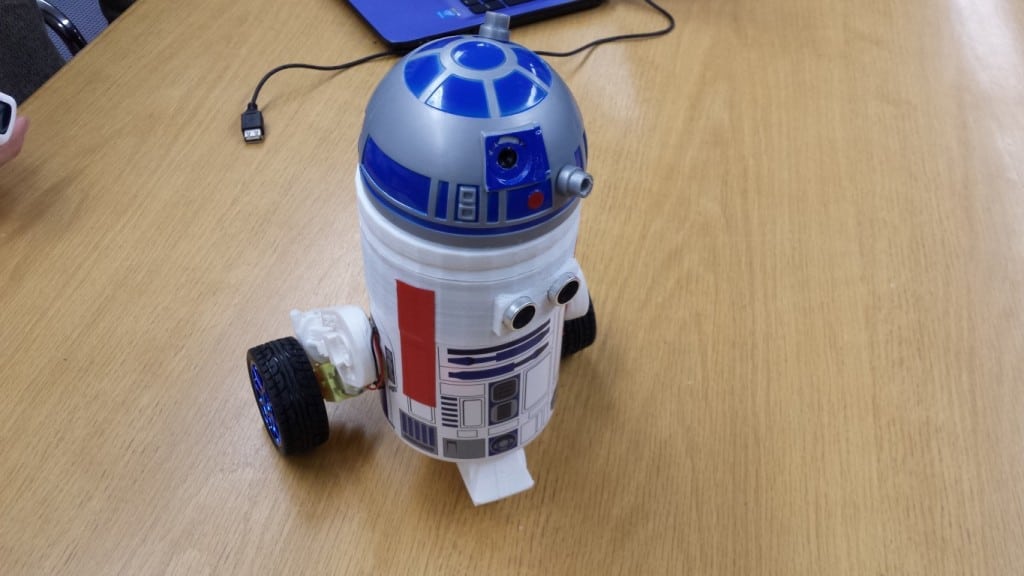 It’s still work in progress, but even at this early stage Mark has managed to get some cool features running (ish). For starters he’s using Jasper to command the Star Wars robot with his voice…which didn’t seem to work very well with the background noise in the room, but it was cool all the same. 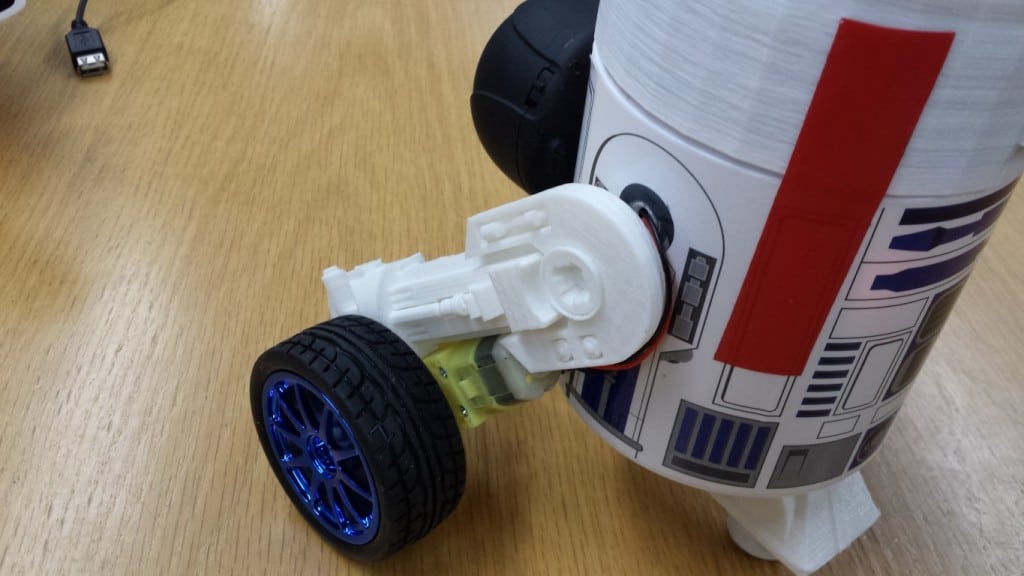 He’s also 3D printed his own legs for the robot…which I must mention is made out of a novelty Star Wars bath bottle! Add to that a Pi camera in the top section and it’s looking like a promising bit of hackery.

You may remember the name Zach Matcham from my Egham Jam write-up. He brought along his Pi Zero gaming machine in a PS1 console casing last time I saw him. This time he brought a project that takes me back to one of my first ever projects with the Raspberry Pi – a Raspberry Pi Radio: 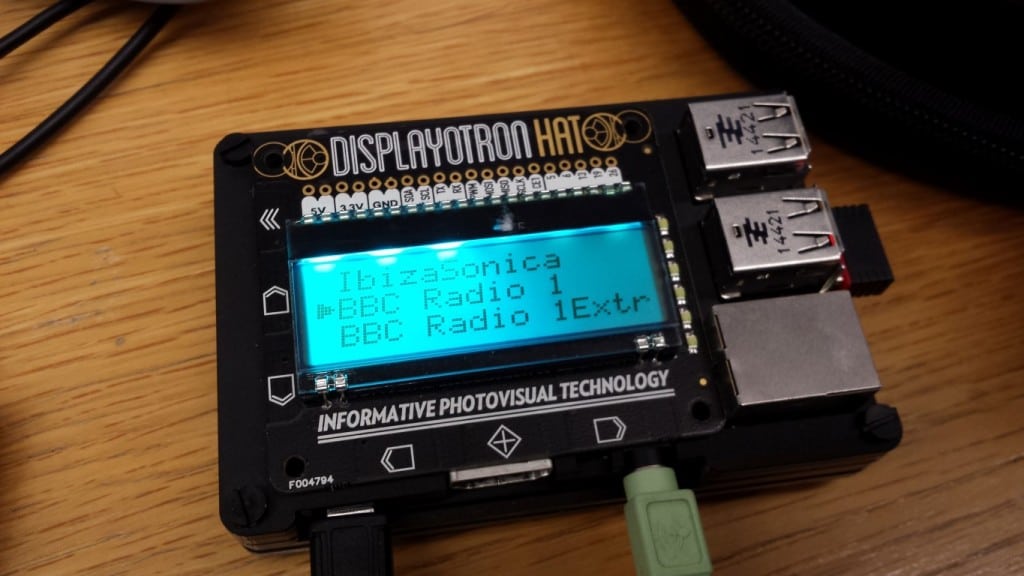 Whereas previously I had used mpd/mcp and other functions to make a radio out of a Raspberry Pi, Zach told me his version was running off VLC – something I didn’t know the Pi could run. This means he can pick up popular BBC stations which I couldn’t get working with the method I used previously.

He used a Display-O-Tron HAT to handle the display and input side of things, which kept everything in a nice small package.

The last thing to share is a cool Wilesco steam engine that was brought along by ‘Dr Hannah‘. OK it’s not directly Pi-related but this scene is open to anything electrical and gadget/gismo-like, especially when they involve fire! 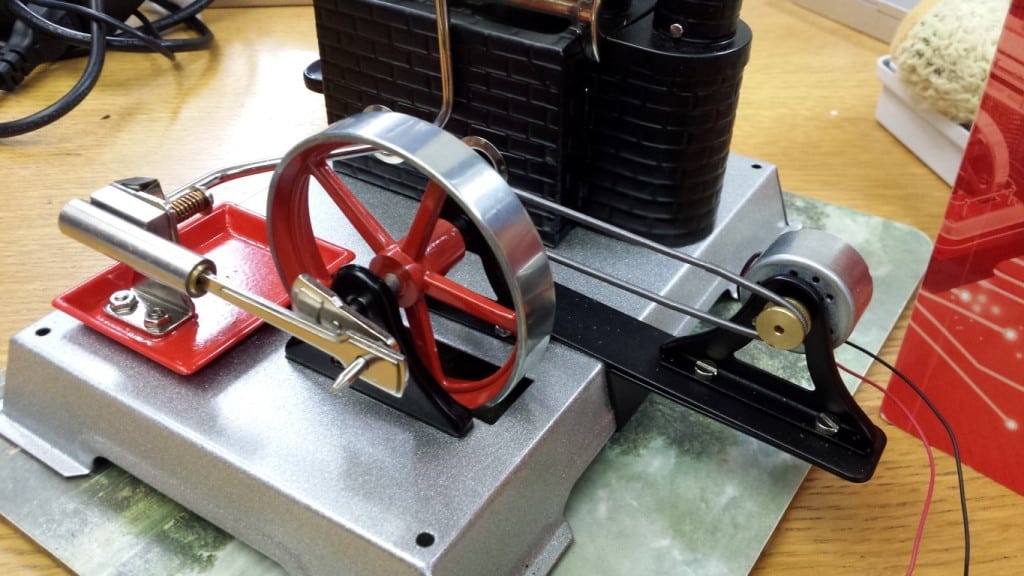 We couldn’t use the little engine indoors, too many flammable books…

I would have loved this as a kid. You pop a little fire lighter under the main tank, which boils water creating steam, which then feeds down the pipes and eventually starts turning the big red wheel which is connected to a dynamo.

With the small amount of electricity it generates, you can experiment lighting LEDs or making more advanced circuits to do ‘stuff’ with your heavily polluting retro energy source.

Some of the areas I didn’t manage to have a good look at were:

As you can tell, there was loads to see and do at this reasonably new and local Jam. I’m still making my way around the county but this feels like the largest Jam I’ve been to in the Essex area so far.

A big thanks to Andy (@Andy-SouthendRPiJams) and the rest of the team for the well organised day, especially for the ‘quiet area’ for exhibitors including the sugary goodness courtesy of Dunkin’ Donuts Chelmsford. This was particularly popular with a starved Average Man around 3pm…