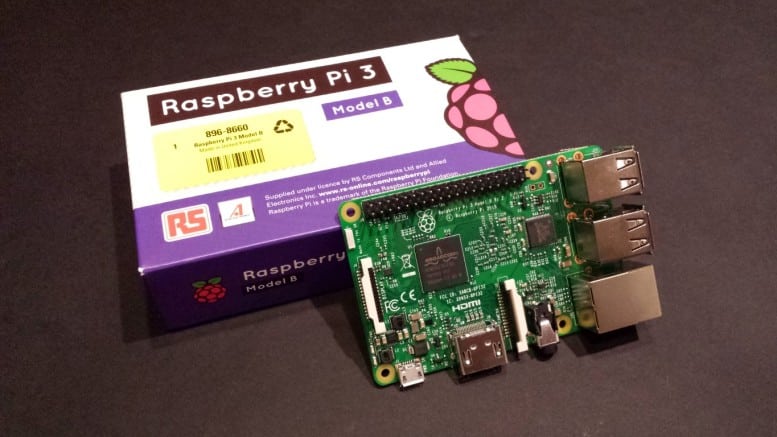 This week’s post won’t come as a surprise to a lot of you following leaks by various organisations and companies, however regardless of the fumbles we can now officially say hello to the brand new Raspberry Pi 3!

I was sent this preview version from RS Components earlier this month around a time that the Foundation’s next move was being heavily debated. The Pi Zero’s fate had multiple conspiracy theories attached to it, alongside popular opinion that the A+ might get a refresh to join the powerful Pi 2 side of the family.

At the same time I also noticed sharp-eyed Pi enthusiasts discussing the sudden lack of B+ stock as well…the whole community has been keeping a close eye on the Pi!

Well we were all wrong – it’s a new Model B – and once again it’s offering even more grunt for your dollar.

Let’s check out the newest member of the Foundation Family… 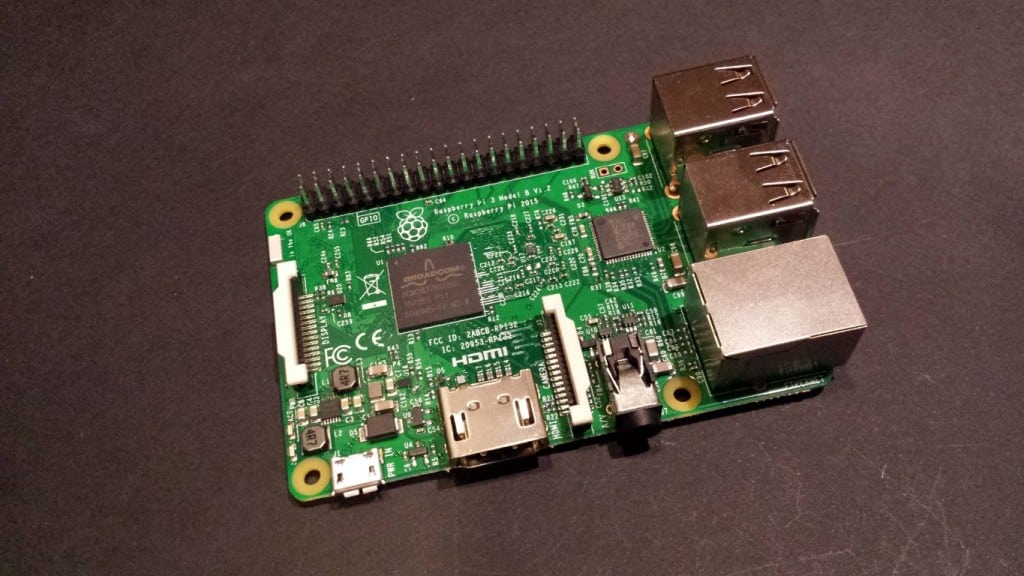 As you can see from the images so far, the board looks very much the same as the Pi 2. So let’s get straight into the part most of you will be dying to find out – what’s new?

That’s a lot of jargon to take in, so what does it all mean to us mere consumers?

Well, initial sweeping statements I’ve been hearing are stating that it’s around twice as fast as the Raspberry Pi 2!  I’ll be checking this out in a separate blog following this one, with some simple benchmarks. 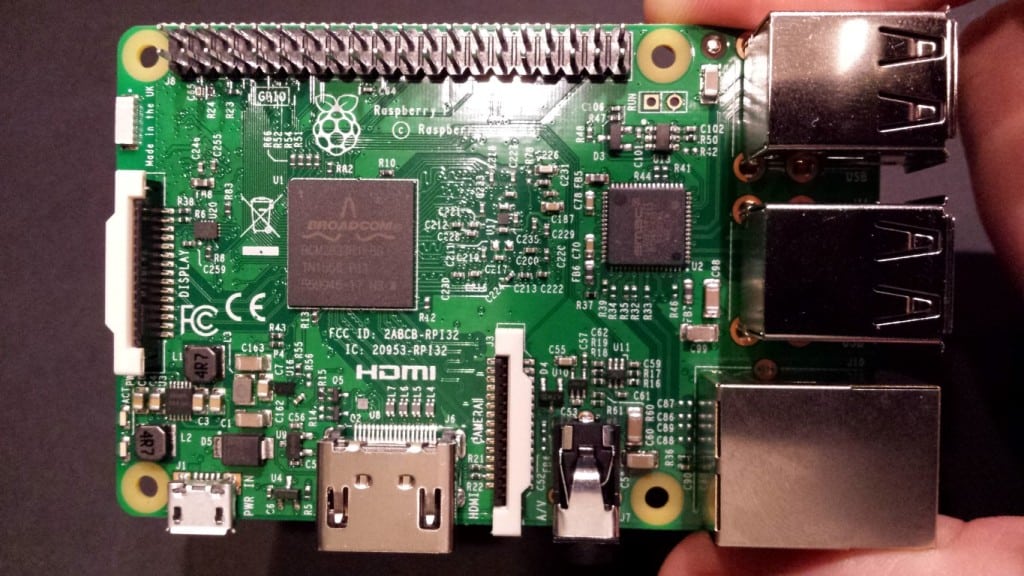 This is my favourite part of the Pi 3 –  it now comes with WiFi and Bluetooth on-board!

I’ve been calling out for WiFi on a Pi for as long as I can remember. Be it connection trouble with those pesky USB adapters or just the fact that most new boards now come with WiFi in this IoT world we live in – the Pi has been screaming for this for a long time.

The Pi 3 comes with on-board 802.11 b/g/n wireless –  that’s the same connectivity standards as most USB WiFi adapters you can buy for the Pi, including the official one.

The other new feature reducing your cable clutter is on-board Bluetooth. The Pi 3 comes with Bluetooth 4.0 and supports both ‘Classic’ and ‘LE’ (low energy) technologies.

The first thing that will come to mind for most of us will be the use of Bluetooth peripherals – keyboards, mice and more. However think of all those robots being controlled via USB Bluetooth adapters, not to mention speakers, smart watches, phones and all the other devices with those lovely blue teeth.

Will all of these devices work with the Pi’s new on-board Bluetooth? Will it be any different to using a Bluetooth adapter? I’m not sure yet, but a man can dream. 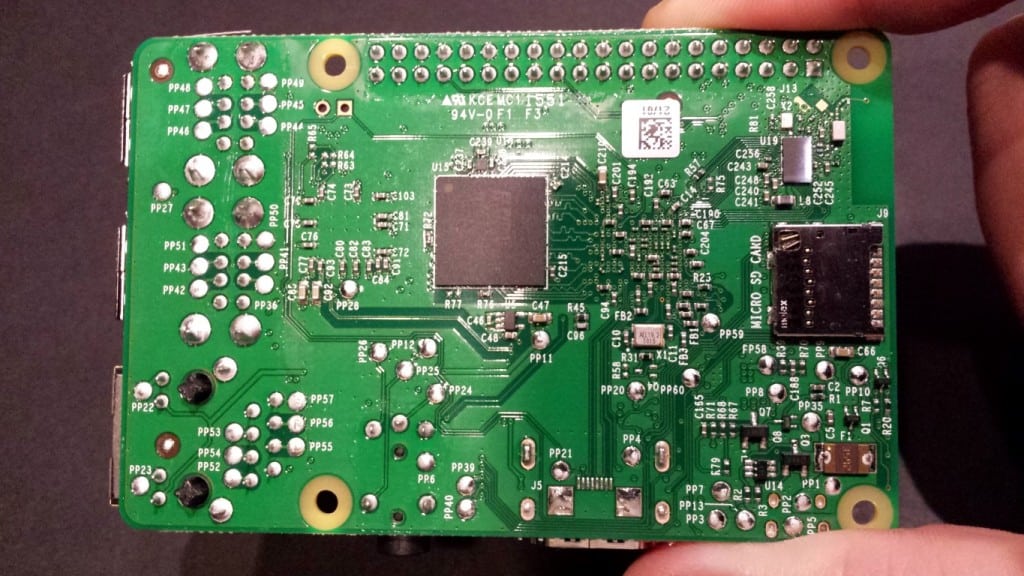 Pi 3 rear – again, not much different from its predecessor

Papa Average has always told me “nothing is ever free”. That statement has served me well for the 30 years I’ve been on this planet, and I think it applies here too.

I don’t think it’s logical to expect the Raspberry Pi 3 to run off the same power supplies as we’ve been using for the previous generations of boards. With a bumped up processor, WiFi and Bluetooth as well, it’s obvious that this little guy will need a bit more juice to play along nicely.

Whilst most existing PSUs will allow the board to run, don’t expect things to carry on that way if you push it to its limits. Therefore, the recommended PSU for the Pi 3 is slightly higher at 5V 2.5A. 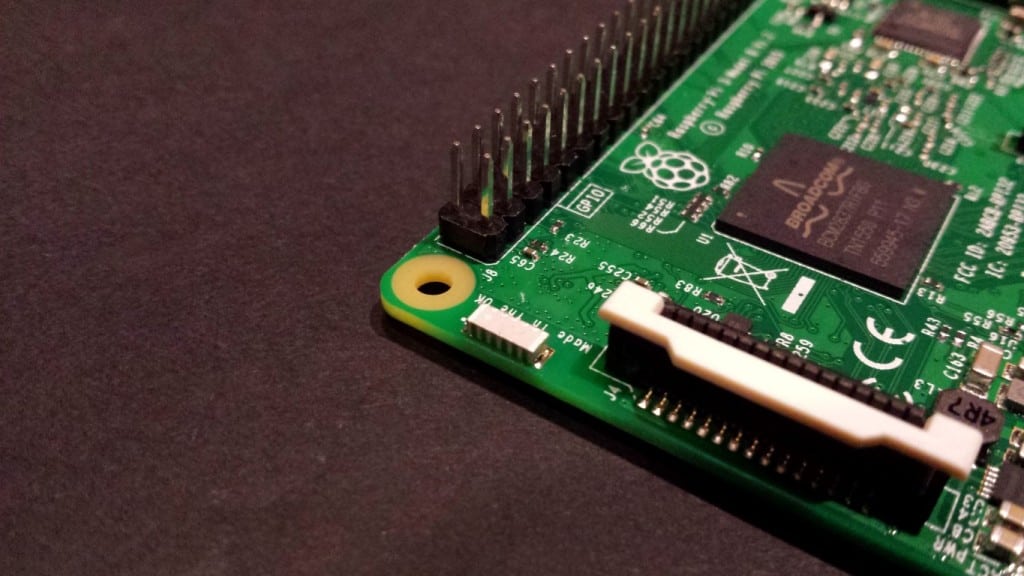 Whilst some of the new features take the Pi 3 into completely new territory, there are a lot of things that aren’t changing – including those features you’ve been asking for:

The board doesn’t look much different to the Pi 2, and that’s because most of it isn’t. It has the same sized PCB, the same physical connections (in the same places) and continues to offer the same 40 pins of GPIO that we all know and love.

Taking a closer look you’ll notice the silkscreen print on the board has been moved around, along with some of the smaller components which shouldn’t make a difference to any of us.

The “run” header (reset header) has been moved from the top-left to the top-right of the board, which may make a difference to you if you have any add-ons or homemade boards that make use of this (I haven’t seen any).

That’s about it for physical changes.

No change to the memory on the Pi 3, with the same 1Gb of DDR2 installed as the Pi 2.

This might be obvious based on the paragraph above, but for completeness the Raspberry Pi 3 has the same number of physical connections/ports and at the same specification.

For those of you that have been begging for a Gigabit Ethernet, maybe next time!

Another obvious one based on above – all of your existing HATs (that conform to HAT specification) will fit the Pi 3.

No change here either – Raspbian continues as is, although we can safely assume there will be additions and tweaks to support the new processor and connectivity options. 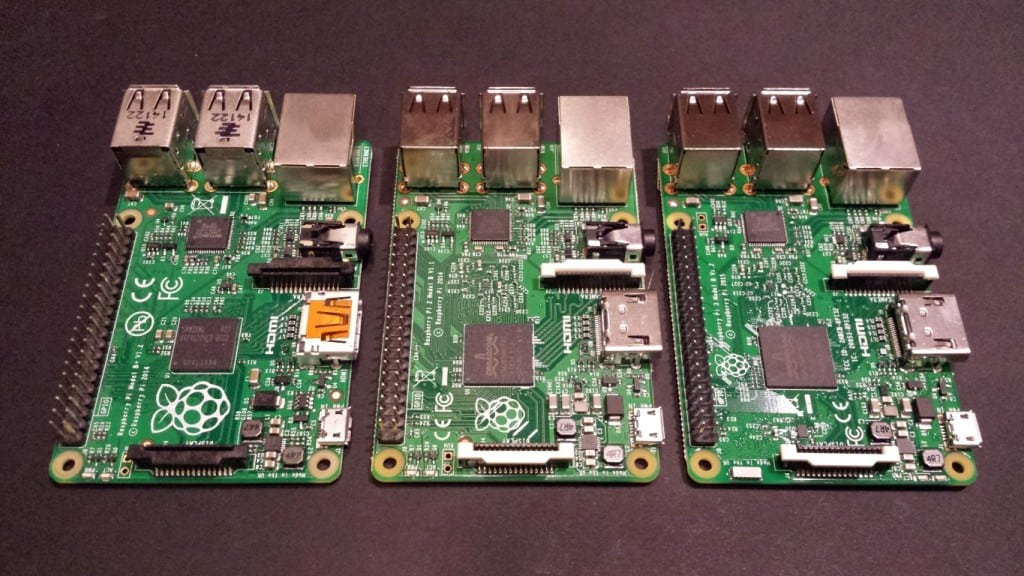 A Raspberry Pi B+, Pi 2 and Pi 3. They can be hard to tell apart, however the consistent shape means your HATs will be compatible across all models.

That could get quite heavy considering all of the various Pi models available now, so I’ll write a separate blog in a couple of week’s time. Subscribe to be notified of all new posts by email.

I’ve made a little Model B table to show you the differences between the versions over the last few years:

Last but by no means least, price. How much is it going to cost to get the latest Raspberry Pi in your hands?

I don’t know how, but they’ve managed to keep the price at the same $35 price as the Pi 2. Excellent. Of course there may be slight variations at different retailers, but the RRP is the same.

There you have it – just three months since the launch of the Pi Zero we have a new Model B packing multiple wireless connectivity options and even meatier guts to keep up with the most demanding of geeky tasks.

Personally I can’t wait to see how this translates in the real world. For me it’s the possibility of faster media centre performance and gaming capabilities that get’s me excited.

The Pi 2 is by no means redundant now, and even the B+ and earlier models still handle most tasks reasonably well. Does this latest release from the Raspberry Pi Foundation offer you enough to upgrade? Let me know in the comments. 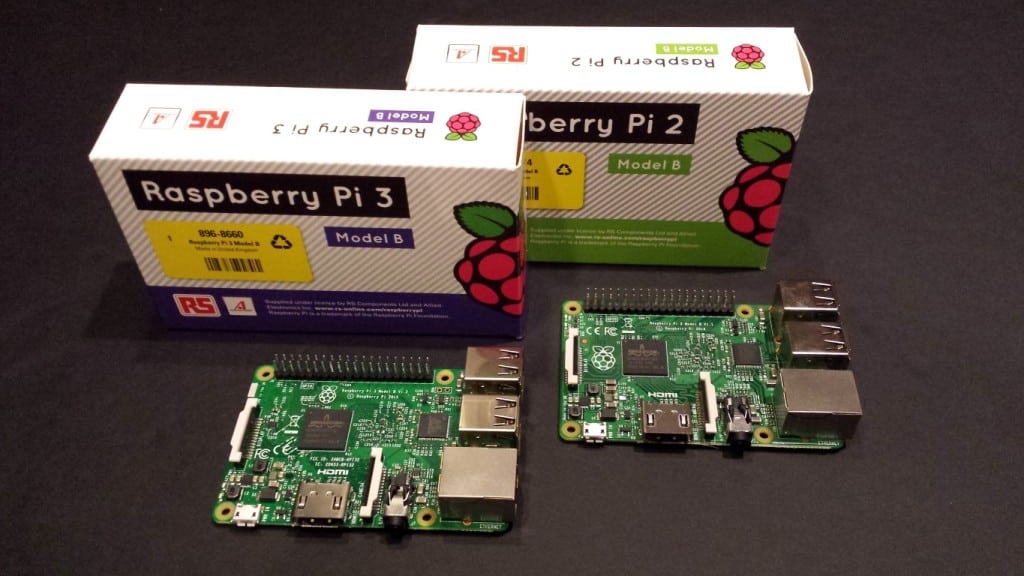 The Pi 2 is still a great board for the money – does the Pi 3 offer you enough to make the upgrade?

I’m sure there will be a rush to buy the new Raspberry Pi 3, so if you’ve read this far down the page you might be too late already!

I received my board from RS Components who will have the Pi 3 in good stock at the time of release, but you know how it it goes – It’ll sell out everywhere on day 1!

Is a New Raspberry Pi Coming?