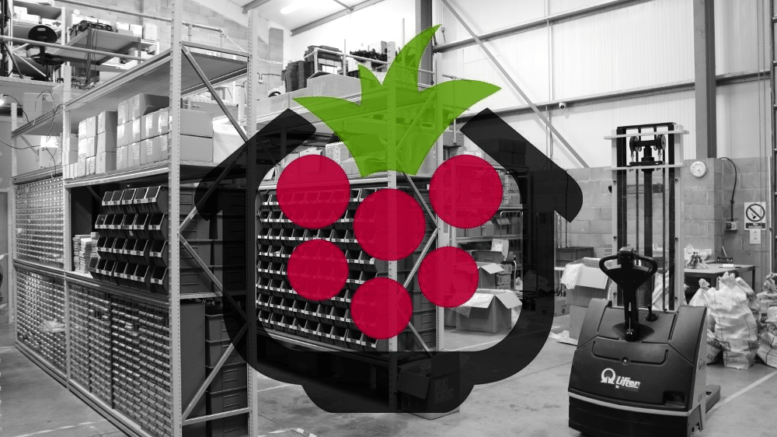 I visited the Pi Hut for a day!

This is the first of what may turn out to be an entire series of visits to local Raspberry Pi stores and organisations, as I take a little break from my CCTV and robot arm projects.

The term “I’m in you” is something that seems to be widely used by fellow Pi enthusiasts when visiting a new area or town for a Raspberry Jam – such as “Southend, I’m in you” – so I’ve adopted the somewhat vulgar term for these posts.

Last month I took the long and twisty drive through the country to see the Pi Hut superstore owner Jamie Mann and his team. It’s a visit we had planned for a while but had to delay it after the Pi3 launch took over Jamie’s life for a few weeks!

With the Pi3 now old news, it was time to get my butt to the Hut…

My plan to visit started when Jamie posted a photo on Twitter (a bit like the one below) of a large pile of orders about to be shipped. I replied stating my amazement, which sparked a conversation around how much ‘Pi stuff’ sells and how big the scene really is. Jamie then invited me over to come and see for myself.

The Pi Hut HQ is about a 1.5 hour drive from my hometown of sunny Southend-on-Sea, approximately 55 miles away.

It’s amazing how much this little country of ours can change in a distance of less than 60 miles. I left Southend waving goodbye to concrete ‘everything’, guns, rappers and crime expecting to see much of the same at my destination.

Wrong! Jamie’s bunker of Pi is hidden in a little town called Haverhill, surrounded by fields, trees and picturesque villages. Jamie tells me the only guns used here are for hunting – no drug turf wars around here then it seems. It’s NOTHING like Southend!

To give you a feel for how different our areas are, a good example is a village I drove through called Steeple Bumpstead. Whilst Southend has a lot of tower blocks and flats, the residents of this village were at all out war against plans to build a development – check out the picture below!

I finally arrived mid-afternoon. Jamie welcomed me in to his office where I met his dog Rudi. She helped break the ice by letting off a bit of wind from time to time…nothing quite de-formalises a meeting like a fart! 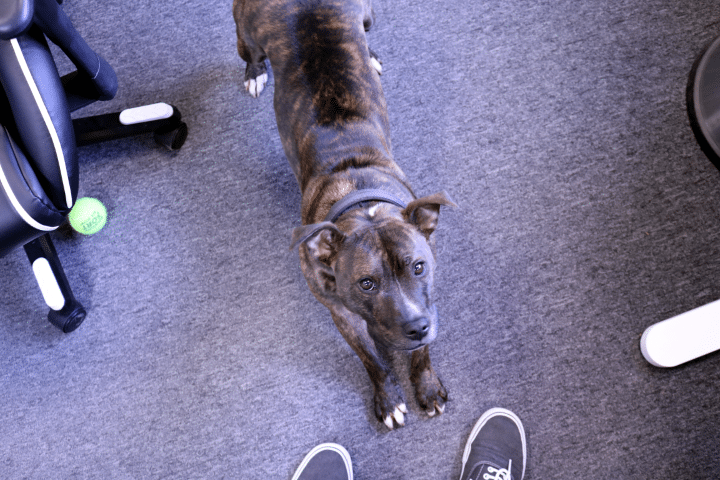 Don’t fall for that cute face, Rudi is a lump of pure muscle

You can tell a lot about a man by his office, so this was a good way to really get to know Mr Hut himself.

First up, a 3D printer in the corner, and above it a Picade and some kind of robot. OK, so we know he’s not a fake – this guy likes his geeky toys: 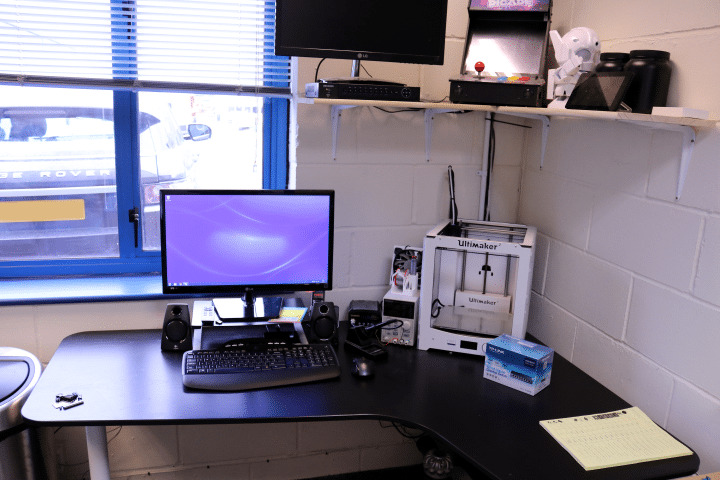 Why does everyone have a 3D printer except me?

In the other corner of the room is Jamie’s cockpit. He’s got a serious looking chair, which of course tells us that he’s the boss man.

You’ll also notice 2 screens, a laptop, a camera bag (with his new Canon 750D just like me) and a big ol’ black box in the corner which I’m sure does something interesting. He’s certainly into his toys, which confirmed that we would get on well. 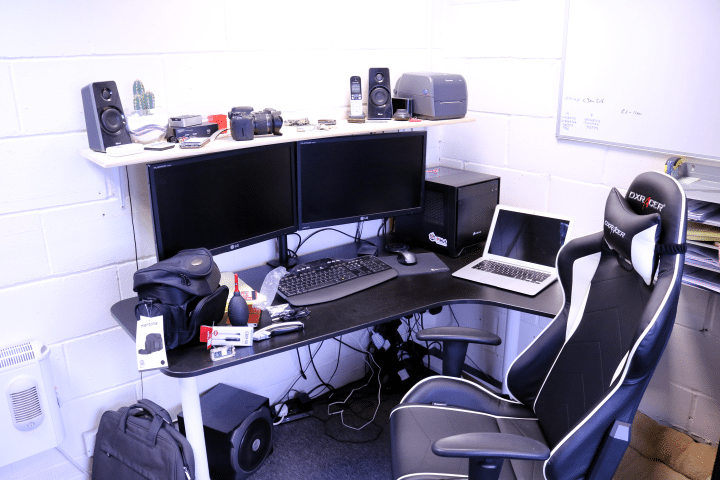 If there was any doubt who was in charge, just check out the chair…

Whilst sipping coffee in his office I asked Jamie a few questions about the history of the company.

Whilst I had previously listened to his success story on the (now closed) RasPi.Today podcast, at the ripe old age of 30 my memory isn’t quite what it was.

Jamie shared how he started out selling pre-imaged SD cards when the Raspberry Pi first came about, as back then it wasn’t quite as easy to set up an SD as it is today. From there he moved on to cases…and continually added more and more products.

Into The Hut – Ground Floor

After a quick chat in his office, Jamie gave me a tour of the rest of the building to see how everything hangs together.

The first thing I noticed was the wall of boxes at one side of the warehouse. This is all the parts, packaging and bits n’ bobs that make up all the items for sale – the stuff you and I order online. 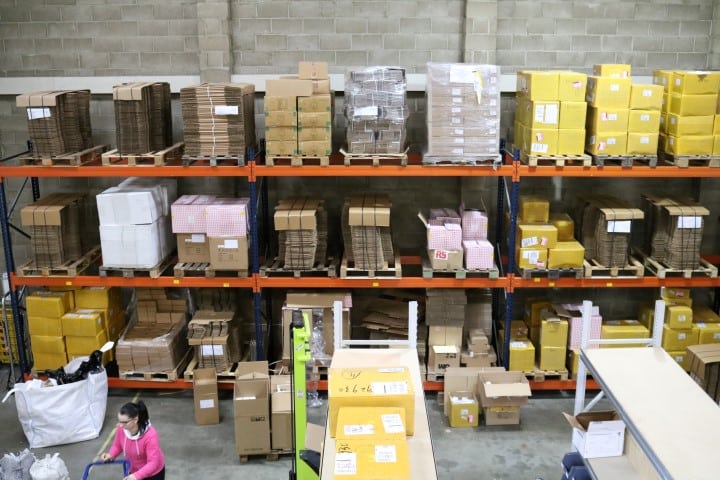 Rumour has it that these are all empty boxes, just put here to impress visitors…

Next to this were walls of little picking trays. These contain all the made-up kits and small items, and are picked from here when you make an order.

I met Jamie’s new recruit Nigel who was jumping from box to box as I walked past, picking a large order to go out that day. Nigel has had a somewhat ‘creative influence’ on how things are done in the warehouse, leaving artistic signs on boxes to help keep things organised. Legend. 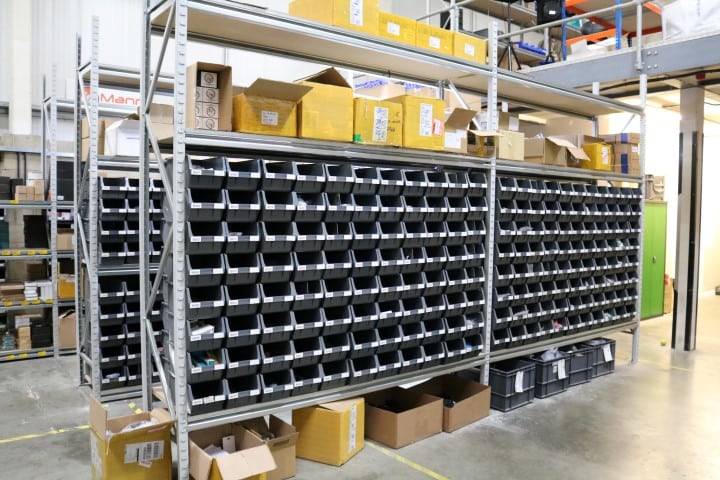 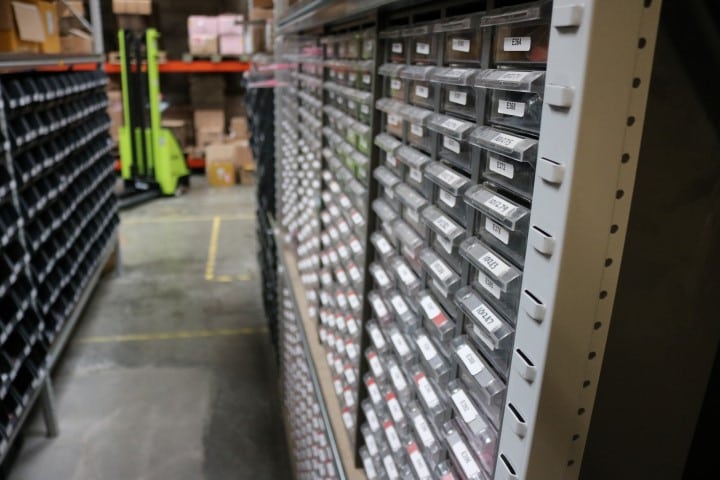 They get even smaller on the other side. 480 products there to be exact! 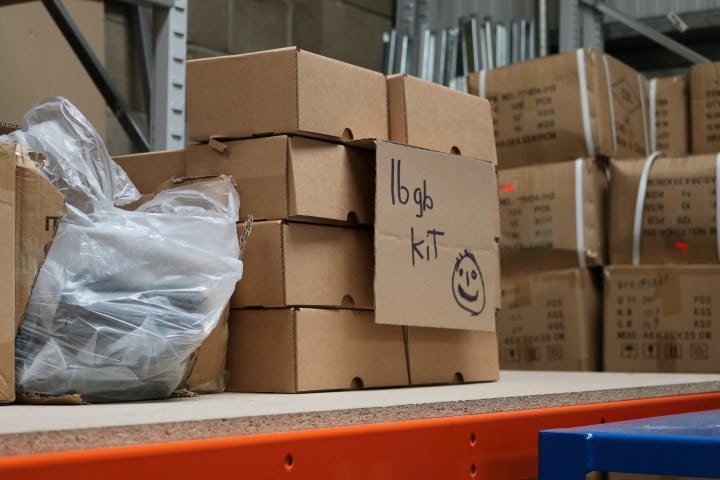 Nigel peppers the warehouse with his flair. The next Banksy?

All of those orders from both sides of the company go out twice a day. I walked past the bags going out for the second pick up, still amazed at how much of this stuff is sold: 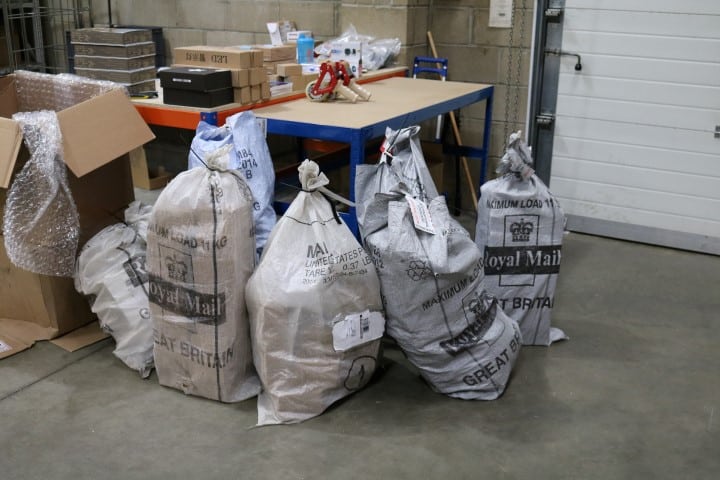 Is your order in there? Just half a day’s goodies ready for the post man

Like any growing company, Jamie realises that it’s imperative to look after his staff. As I walked past the staff room it was clear that no expense is spared on staff comfort… 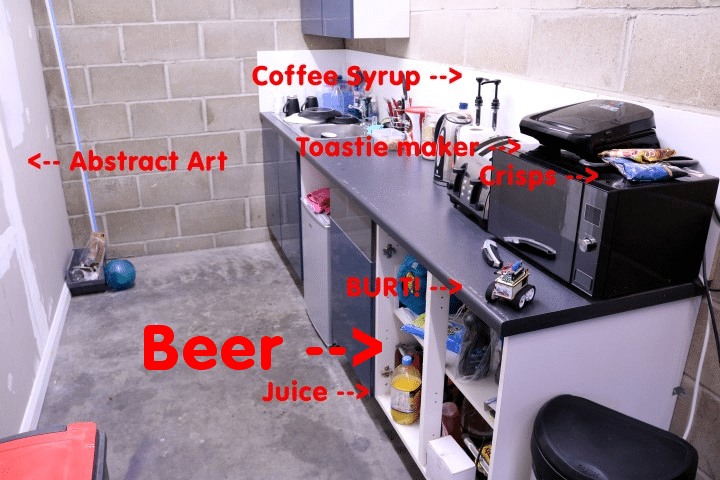 Forget the lack of decor, these guys get free beer!

…I joke, but in all fairness, with free coffee, syrups, sweet chilli sauce, branded crisps, fruit juice, cutlery, beer and even a toasted sandwich maker – these guys are getting a lot more than I do at my office! After a year of ‘building’ the staff room, Jamie tells me that he’ll be finished ‘soon’…hmm.

I have to mention Jamie’s pride and joy sitting on the ground floor – his fork lift. I didn’t realise how much a man could love a machine, especially a green one. Has anyone ever loved anything green? I wonder if other Pi shops have similar hardware? 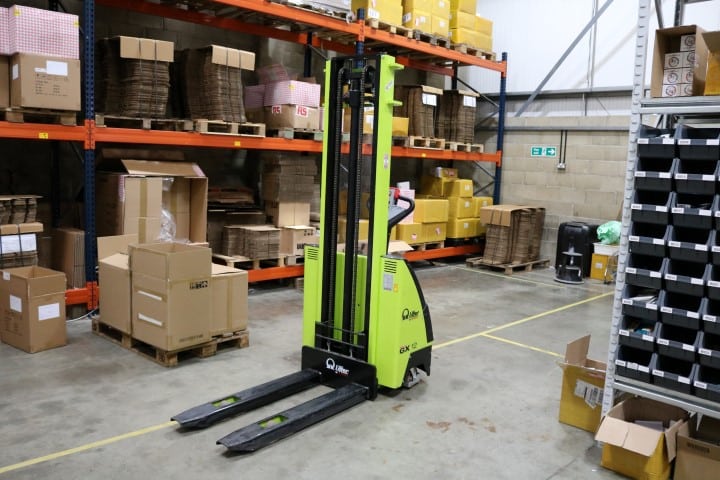 Into The Hut – 1st Floor

As I walked past a room with the rest of Jamie’s crew checking out the new camera modules (released on that day), we came to the stairs leading us to the first floor.

This is primarily the ‘kitting up’ area, where the team put together items to make up bundle kits and their own products. These are things like Raspberry Pi starter kits and CamJam EduKits you’ve no doubt come across.

Kits are made up here here. Anything from Pi bundles to internal products like the CamJam EduKits. 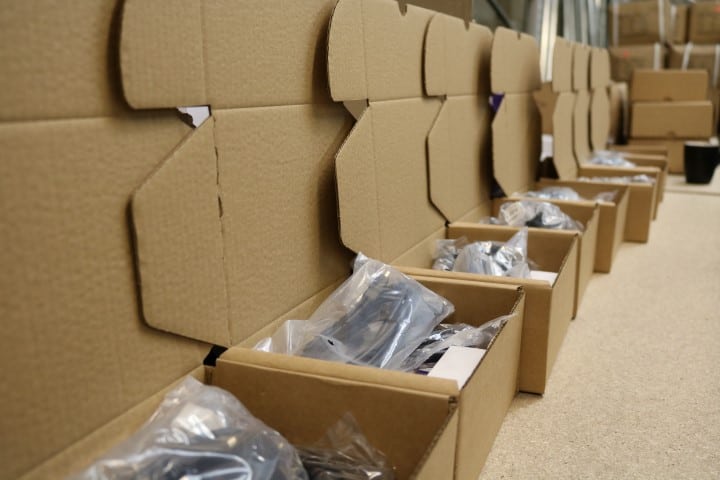 A batch of Raspberry Pi 3 kits being made

Also on this floor is a bit of a homage to where it all began. Trays upon trays of little micro SD cards lay on a shelf waiting to be imaged and packed in bags. I took the opportunity to get a bit creative with my new camera: 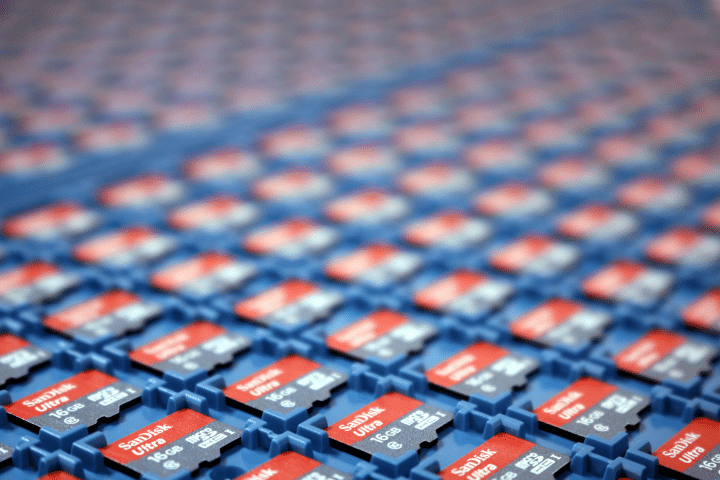 Where it all began. Pre-imaged SD cards are still strong sellers.

In the other corner are all the packaging supplies for kits, and the scary ledge where the fork lift moves things between floors. Turns out I have a bit of a thing about heights, so I stopped here! 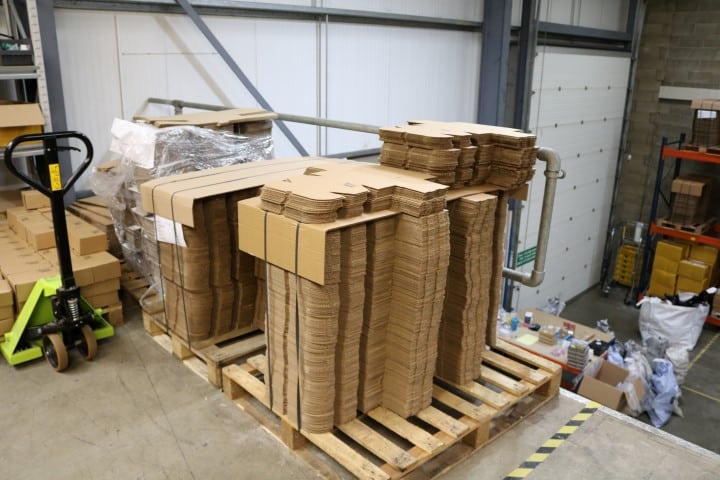 Kit packaging on the left, and the ledge of doom on the right

BURT was a little braver than me… 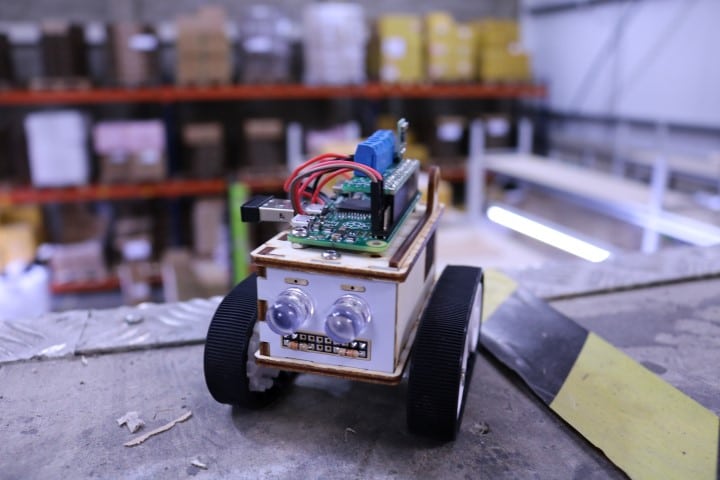 You can see the fear in his LEDs…

Makersify Vs The Pi Hut

Whilst up on the top floor I noticed the ‘Mann Enterprises’ sign leaning against the wall, yet to be fitted since moving from their previous smaller premises. It reminded me to ask a question on something that I had been wondering for a while… 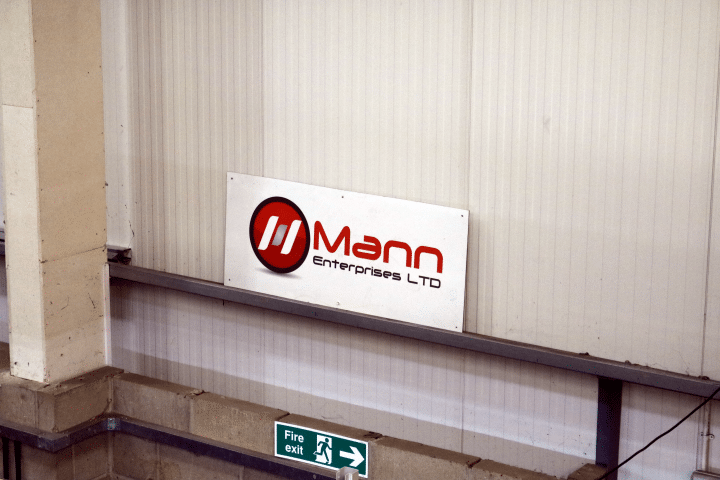 Funny story – Jamie’s old boss used to joke that he would one day own his own company called “Mann Enterprises”…so that’s exactly what he did!

I had noticed that The Pi Hut and Makersify were both trading under the ‘Mann Enterprises’ company, but couldn’t see why there was a split – why it wouldn’t just be one store? Jamie explained…

The Pi Hut is just for the Pi – aimed at those new to the scene or just interested in the Pi. That’s people like me, teachers, parents, newbies etc. I guess the device and its following is big enough to warrant its own store.

Makersify is more aimed at the hackers and makers out there, that might be using the Pi or other devices such as the Arduino or Beaglebone. Whilst you can still buy Raspberry Pi stuff from Makersify, they also stock all the little bits and bobs for people that are already making their own hardware projects. It’s a wider spread.

There is a bit of a blur depending on what kind of user you are (I feel I’m a bit in between), but I’m now clear on why there are two stores at least.

Well that was fun – my first visit to a Pi store/warehouse.

I saw boxes. I saw coffee syrup. I smelt a dog. I met a man called Nigel. If that doesn’t stop me sleeping with excitement I don’t what will.

Joking aside, it was great to finally see how these large Pi shops work behind the scenes. It really is fascinating to see just how much of this stuff ships around the UK (and globe) on a daily basis, and how a small team can do all that in a relatively small warehouse. 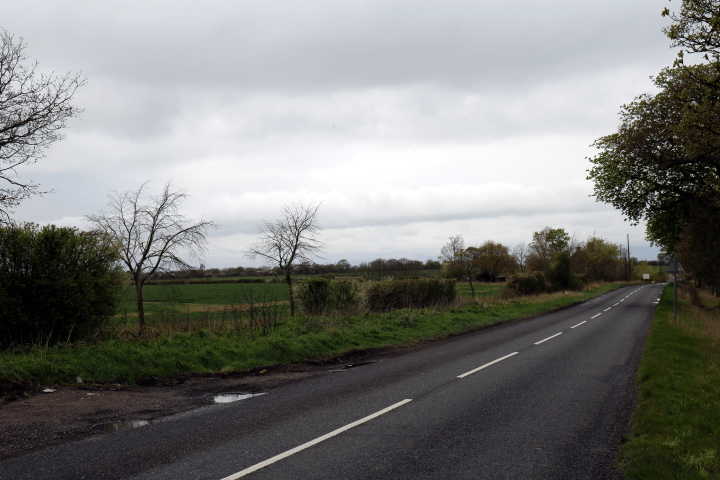 Where will I visit next? Who knows…but for now it’s time to get back to my CCTV and HEW robot arm projects.