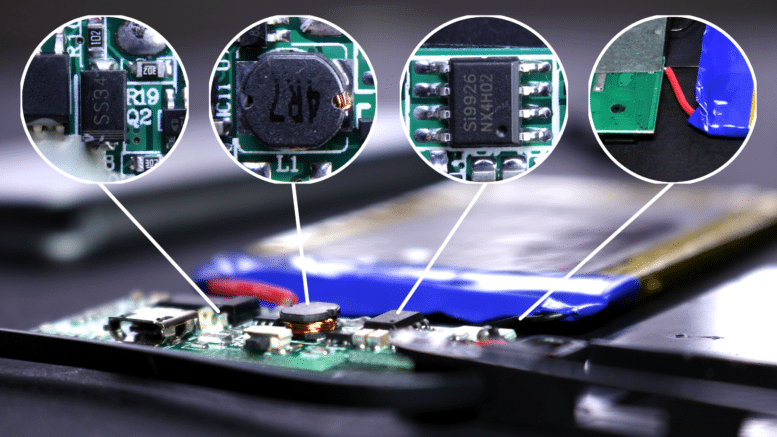 Another random non-Pi post again, and very similar to my previous “What’s inside the yellow motors” blog I wrote a while back.

People seemed to enjoy my ruthless destruction of an innocent motor, so I thought I’d take apart another perfectly good item in the name of research and public entertainment.

This time it’s a power bank – a really tiny one. I found these credit card sized examples on eBay a few weeks back, which caused a bit of a stir on Twitter as they were going for just £3. Less than the price of a pint for a (supposedly) 2000mAh power bank that will fit in your pocket – sold!

They’re perfect for Pi Zero projects (I’m thinking robotics), however Papa Average has always told me “you get what you pay for”, so it was only right to have a nose inside and see what £3 gets you these days…

I’m going to assume these were leftovers from a corporate event due to the low price and obvious branding on the front. I can’t find anything on Google about ‘Interlocc’ but the label says it’s something to do with Computashare and IBM. 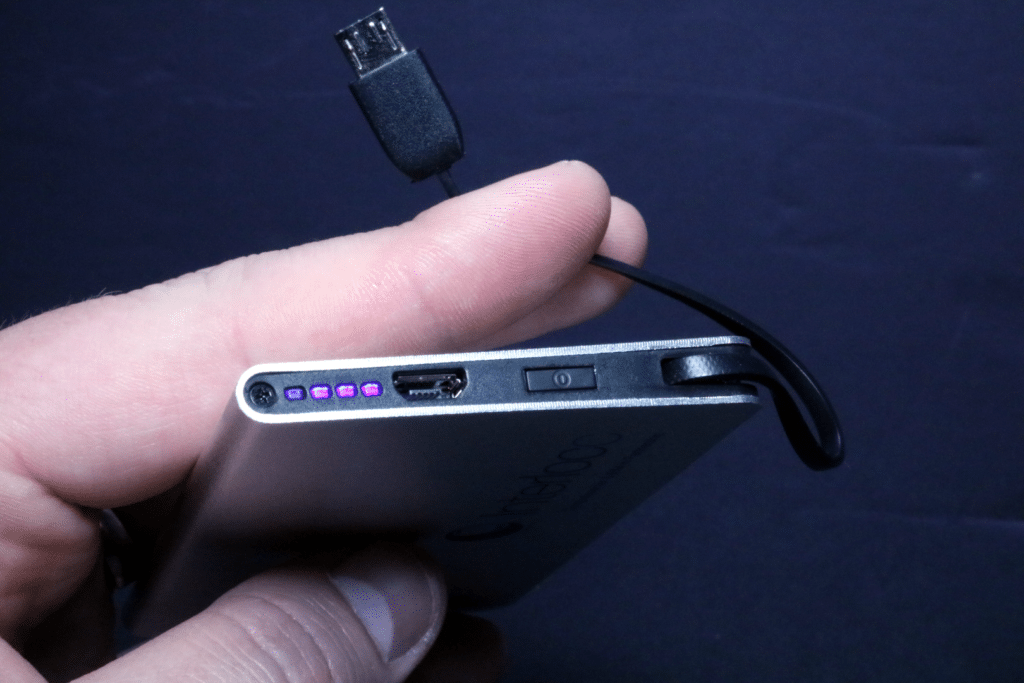 The power bank was advertised at 2000mAh, which makes sense as it’s roughly the same size as a smartphone battery. For £3 you get some decent features such as an attached micro-USB cable and a power indicator button/LED display.

Time to tear this helpless power bank apart and spill its guts all over the table.

There were 4 very obvious cross-head screws visible from the outside, so I kicked off by removing them: 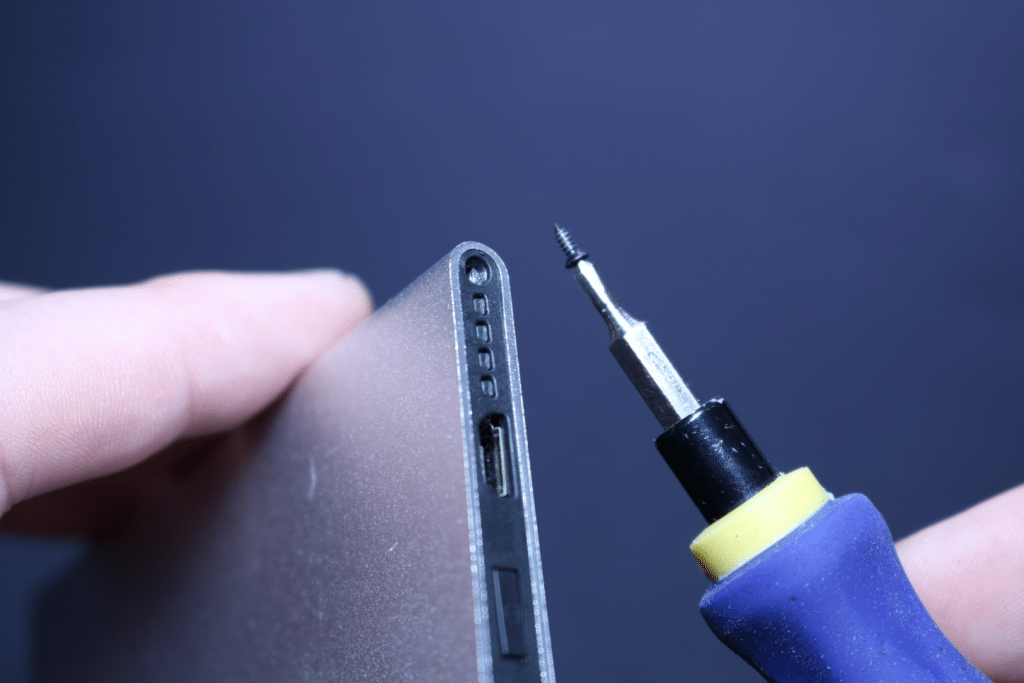 With the screws removed I managed to pry out one of the plastic edges. This revealed exactly what I was looking for – some kind of battery.

I’m confident this is LiPo due to the small size vs mAh rating, so I made sure to be careful as I’ve heard that these things can be a bit temperamental:

Turning the unit around, I popped off the plastic section on the other end which revealed lots of lovely circuit/PCB guts: 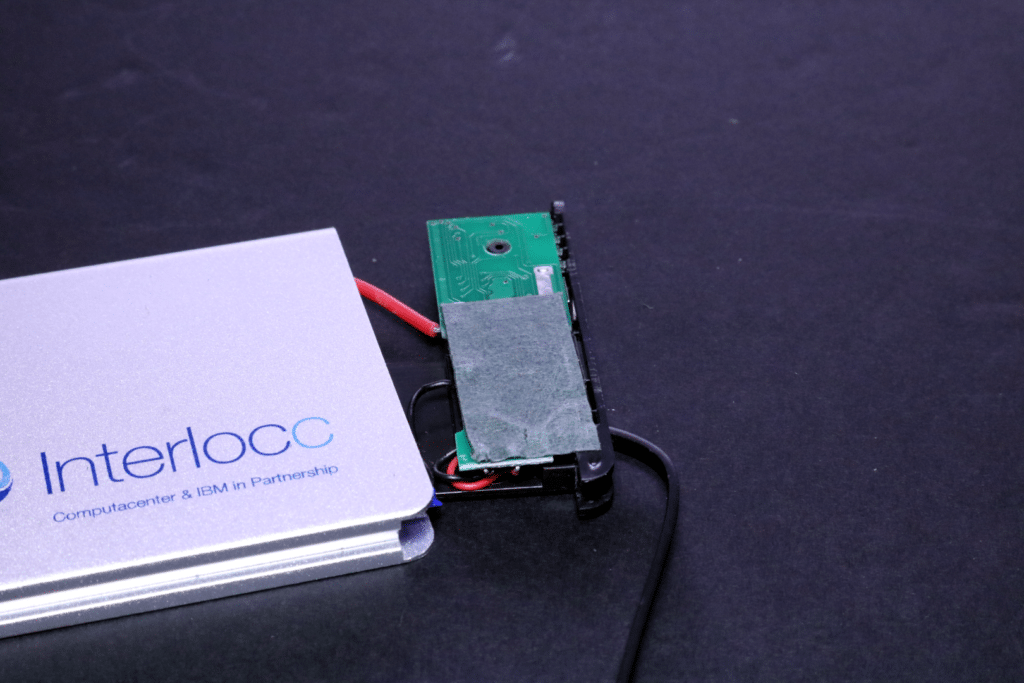 The PCB was hiding at the other end

I’ve not seen a LiPo without some kind of rating, specification or model number before, so it makes it a little bit dangerous to consider removing and using this battery elsewhere. 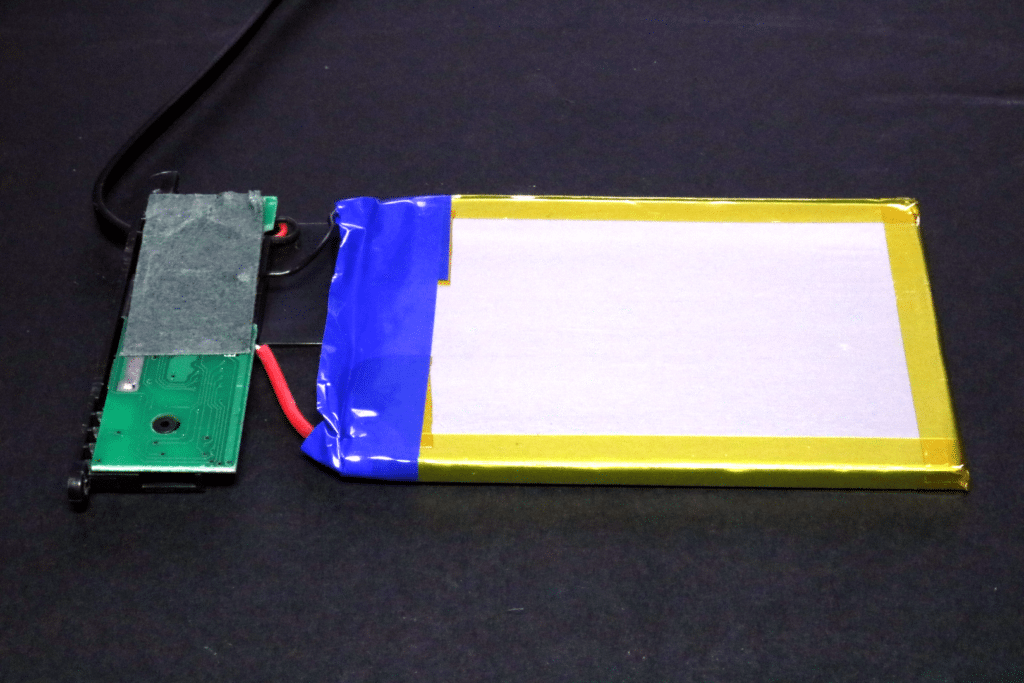 The LiPo battery and PCB

I wanted to take a closer look at the chips used on this board, purely out of curiosity and a good excuse to try my cheap n’ nasty screw on macro lens.

I’m no expert on ICs, but I figured it would be fun to Google the chip names and see what comes up. Hey, we might even learn something! 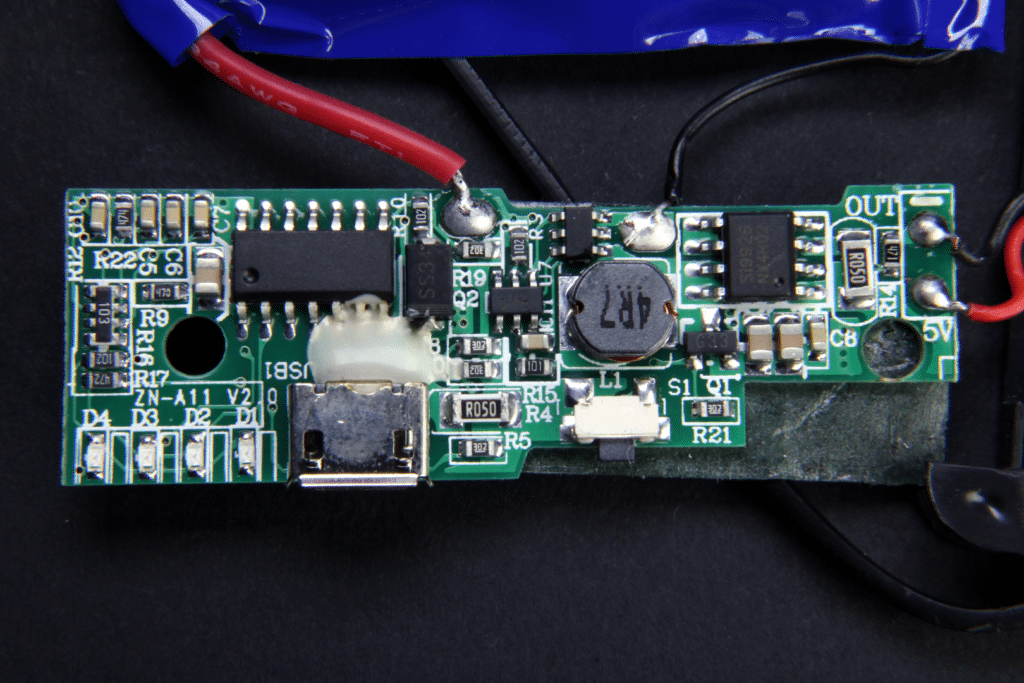 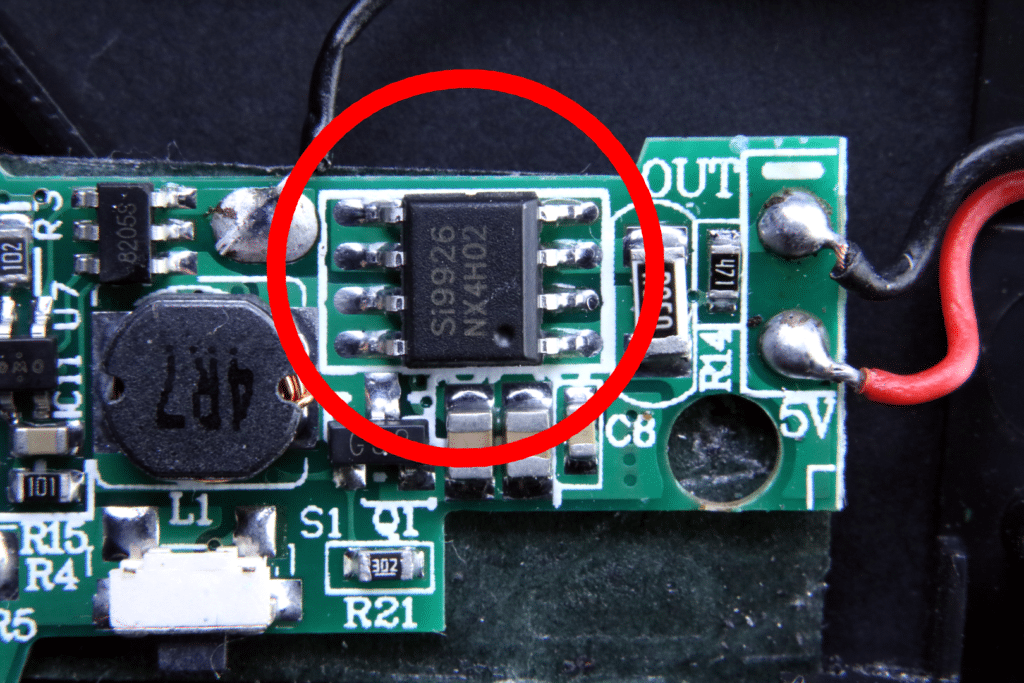 This chip is a dual N-channel MOSFET, which stands for ‘metal oxide semiconductor field effect transistor’ according to Wikipedia. That page goes on to tell us that this is a type of transistor responsible for amplifying or switching electronic signals. Interesting!

The other part that caught my eye on this side was a component I had seen before on boost converters, the little chap circled below with 4R7 printed on it: 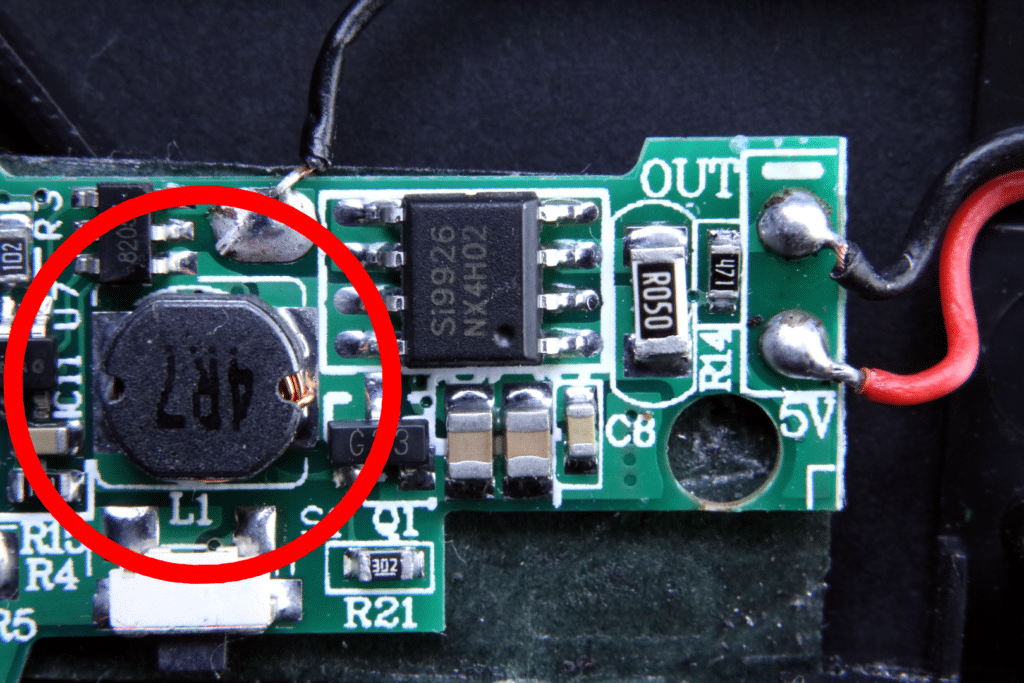 Back to Google, this time a image search to match the part, which indicates that this is a power inductor. I found a good article from FutureElectronics that explained what this component does.

They can be used for a number of reasons, but I’m going to take a punt and assume that it’s part of some kind of DC-DC conversion – perhaps bringing the LiPo battery (3.7V) up to the 5V the power bank offers?

I nearly missed this little IC as it’s just so small. It’s a tiny 6-legged chip hiding behind the inductor. 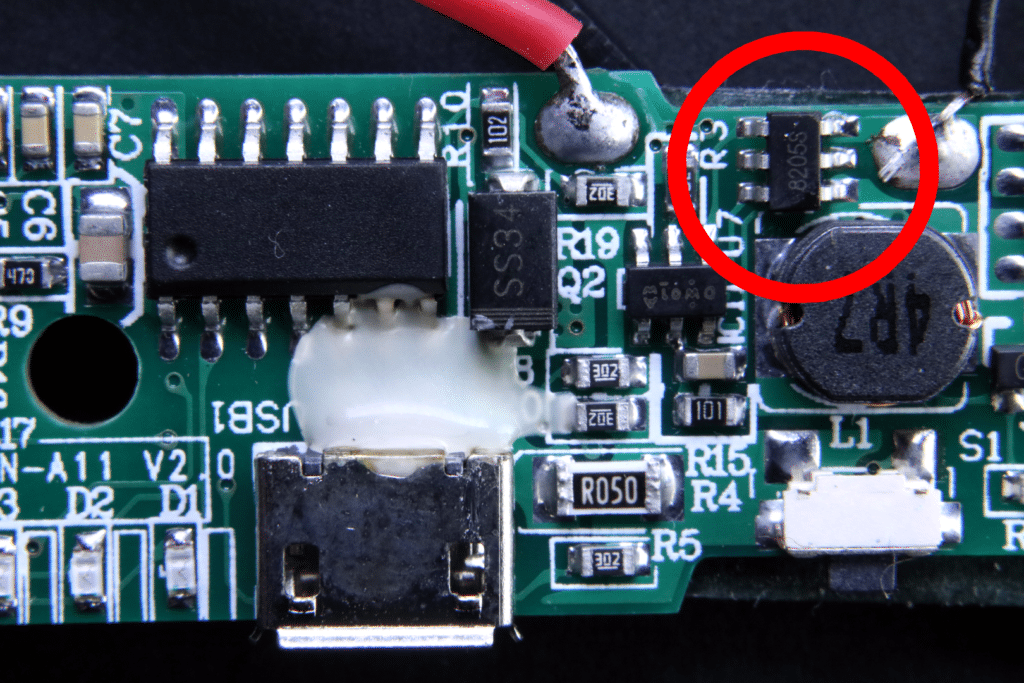 The 8205 – protector of batteries, defender of power!

I Googled the ‘8205S’ and found out that this tiny guy is responsible for battery protection. I did a bit more searching and found data for chips in the same family, which informed me that the 8205 protects lithium-ion battery packs from overcharge, overdischarge, and overcurrent.

It also appears to manage voltage detection, which may mean it’s involved with the power indicators on the side of the power bank. Splendid.

That’s a mouthful isn’t it! The last chip in my little investigation (as the big one on the left has no name) was this chubby component called an ‘SS34’. 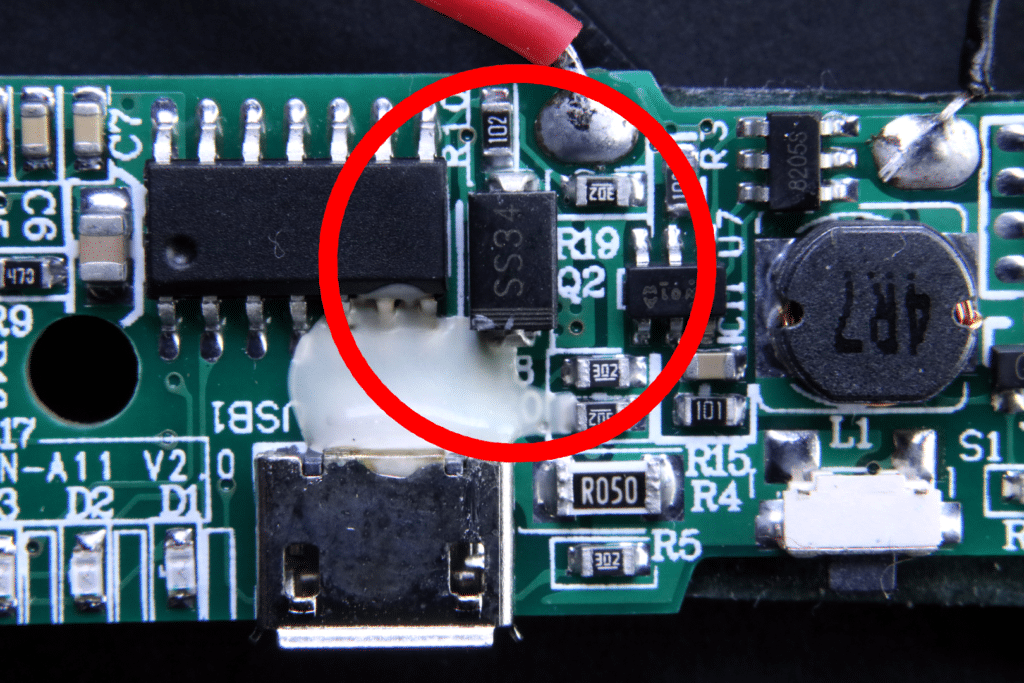 The SS34 Schottky Barrier Rectifier. Spell that without help and you win a prize.

Interestingly my searching led me to AliExpress where the part on sale clearly matched the item on my PCB – it was a Schottky Barrier Rectifier (which I believe is also known as a Schottky Diode).

Continued searching suggests these components are used for one of three reasons:

I feel like a power bank could do with all three of these features? Interesting.

What fun to be had investigating random electronics! I’ve educated myself on a few ICs I didn’t know about, and I might even be able to put it all back together and still have a working power bank. Result.

This kind of ‘hackery’ is where my interest in the Raspberry Pi and electronics spawned from, way back when I was around 10 years old pulling apart Papa Average’s old computers. It’s all education one way or another, even if it’s just learning how tools work and how not to break things next time.

If you’ve got any old gear lying around, the weekend’s approaching folks…

4 Comments on "What’s Inside A Cheap Power Bank?"