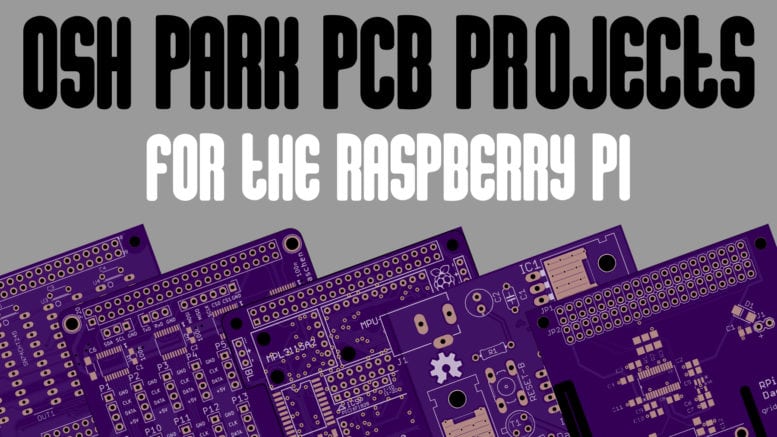 Making PCBs is fun once you know how, but getting to that point can be a struggle.

Most PCB design software has a steep learning curve if trying to self-teach, which I know from my experiences with RS DesignSpark. It’s easy to get going, but progressing to the level where you really know your way around can take some patience.

My journey with printed circuit boards started when I discovered open source ‘Gerber’ files. These are usually a zip file containing the individual layers that make up a PCB, which you can send to a board house to manufacture.

A few years back I discovered the Pi Crust from PiSupply – a Kickstarter project for a very low profile GPIO breakout board. I noticed that the board wasn’t actually designed by PiSupply – it was the product of creative mind Joe Walmes.

PiSupply Pi Crust centre, and my versions in black and green either side. I also made a white version.

After checking out his GitHub, I discovered that the design was available as open source.

A few discussions with Joe and other members of the community taught me that I could simply send these Gerbers off to a low-volume PCB fabricator to get a small batch (10+) made. Ever since then I’ve continued to educate myself on PCB design and have generated some success with my new skills.

I thought I’d put together a little collection of open source (and some ‘kind of’ open source) add-on board designs for the Raspberry Pi that you can get made yourself from OSH Park.

A little warning. All of these projects are Gerbers made by some random person somewhere in the world, shared by the totally untrustworthy thing called ‘the internet’.

There are no guarantees that any of these will work, although in reality I doubt people would upload a design without testing it…we hope…

I think it’s only right to share the Pi Crust link with you first. It may not be relevant for a lot of you as it is designed to fit the original 26-pin Raspberry Pis, but I still have love for this board.

The Pi Crust is a GPIO breakout board, moving those vague rows of GPIO pins into more useful and spaced out sections. I love how the different pin types are grouped together logically, as well as offering lots of power and ground pins. 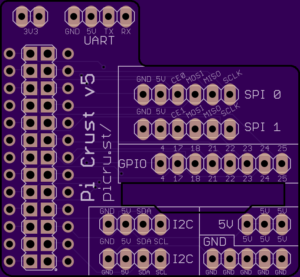 The Pi Crust, the little guy that started my fascination with Gerbers, PCBs and electronics (Image: OSH Park)

Its low profile shape and size makes you question if it will short out against the Pi, but it’s cleverly protected by a square block of plastic from a pin header.

Get it made:  (no longer available)

What the fudge is a HUB75?! I had to use Google to see exactly what this board was ‘adapting’.

HUB75 is a standard interface for those large LED panels you’ve probably seen lurking about. This adapter board ‘appears’ to do all that messy wiring for you and run the panels into the necessary ICs, but instructions are non existent. 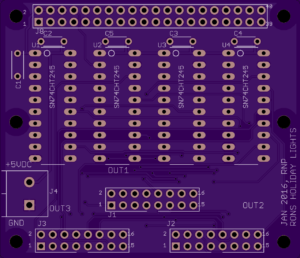 A packed HUB75 PCB with some potential errors. Order at your own risk! (Image: OSH Park)

Update: See the helpful comment from Henner re the SN74CHT245.

The board looks pretty cool – if it works. However this is perhaps a good example of a PCB to approach with caution – potential board errors, no website, no documentation and no code.

This board has lots going on and is sold as “A digital mode soundcard interface for the Raspberry Pi”. It doesn’t push on to the GPIO and isn’t Pi-sized, but you can’t have it all I guess. 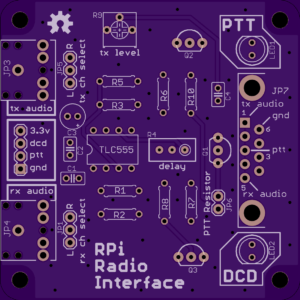 This appears to be a board aimed at HAM enthusiasts (Image: OSH Park)

I didn’t understand half of the terminology used in the description, I wasn’t sure if this board was for FM radio, HAM (amateur) radio or some other kind of radio, so I consulted my HAM expert buddies over at HAM Goodies to see if it meant anything to them.

It did, which means this is most likely HAM related in one way or another (Please add a comment if I’m wrong…I’m regularly wrong!).

If you’re into that HAM kind of world, this might interest you. The rest of us will continue to look a bit perplexed.

This ones an ADC – that stands for Analog to Digital Converter. There are lots of ADC boards for the Pi on the market, but why not make your own?

This one uses as TI ADS1258 ADC chip, which is one of those scary square SMD packages that might just be a bit of a pig to solder, but a little bit of ambition is a good thing. 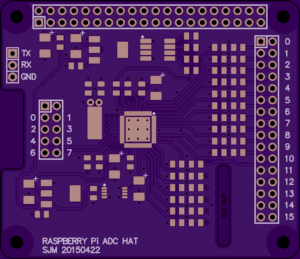 It has 16 channels to connect analog sensors and ‘things’ to, has an additional 8 GPIOs, has on board regulators for digital and analog supplies and includes an EEPROM.

Another board with lots going on – maybe too much?!

Unfortunately the website for the board now leads to a 404 page, but luckily the GitHub repo is still alive, which includes Eagle files.

The GitHub explains that this board allows the Pi to be turned on or off from something like an XBOX power button, which sounds like a fun project if you think about custom enclosures and other potential makery. 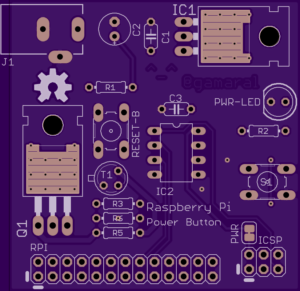 A Raspberry Pi PSU board that allows the use of buttons similar to what the XBOX uses. Neat! (Image: OSH Park)

I’m not sure if the BOM (Bill Of Materials – the list of parts) is available, so another one to approach with caution here.

This is a bit special, an “IMU Development Board for controlling a Quadcopter”

Quadcopters – cool. Raspberry Pi – cool. I conclude that this board must therefore be double cool! 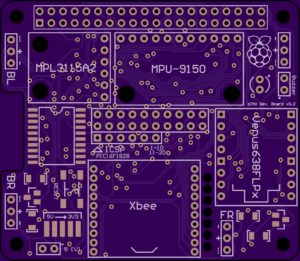 A quadcopter add-on board for the Raspberry Pi sounds epic, but you can bet it won’t be an easy project. (Image: OSH Park)

I’m not going to pretend to know how to use one of these, but it’s nice to see such interesting projects being shared on OSH Park.

Frustratingly this is another example of a good board with minimal documentation. It lists some required parts but hasn’t got the detail required to allow someone ‘average’ like me to make up the board. Shame.

This board, if you haven’t guessed by the name, is a DAC (Digital to Analog Converter). DACs convert our digital music into the analog signals that speakers desire.

This is an interesting PCB, as it can be populated with different ICs which in turn then makes it function like 2 different existing DACs on the market. 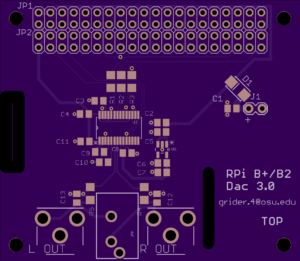 An interesting DAC board that allows you to mimic one of the popular market offerings by selecting the chip type. (Image: OSH Park)

Fit a PCM5122 and it’ll act just like an IQaudIO DAC+. If you’d rather use the PCM5102, then the board becomes a wannabe HiFiBerry DAC.

It comes with a proper list of materials from a specific BOM number for the DigiKey BOM Manager site. Handy!

I love the hype around Pi Zero USB hubs. Personally I don’t understand why you would buy a £4 Pi Zero and then spend £20 on a USB hub – surely a Pi 3 is a better option? Each to their own.

However, if you’re after a USB hub for your Pi Zero, there are lots on the market – but why not make your own instead:

A Pi Zero USB HUB that can be soldered directly to the back of the PiZero (Image: OSH Park)

This is a well documented 4-port USB Hub Pi Zero PCB project, with the design and BOM having a full write-up over at OpenHardware.co.za. It has an excellent ‘feature’ of being able to be soldered directly to the back of the PiZero, keeping your project nice and small.

If you have the ability to solder SMD parts – this is definitely worth a go.

More blinkyness, this time with an adapter which allows you to control no less than 16 SPI LED strips. 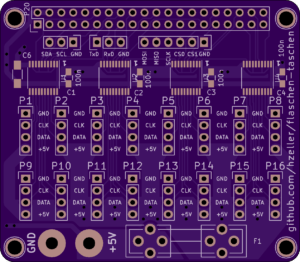 This one has a good story behind it. The board was originally developed for the ‘Noisebridge Flaschen Taschen Project‘ which looks to be an arty matrix of lights fitted within clear bottles, held by milk crates, as a bit of a ‘matrix wall’ kind of thing. They then released the design to OSH Park for other uses.

There’s a C++ library available, and a full BOM and hardware specification over at the hardware section of their GitHub.

There you go – 9 projects for you to get your teeth in to. I honestly think it’s just ‘worth a go’ as OSH Park are reasonably cheap and it’s a great way to learn more about PCBs and fabrication.

If you know of any other websites that offer a similar ‘share/buy’ service like OSH Park, please let me know in the comments. Happy making!