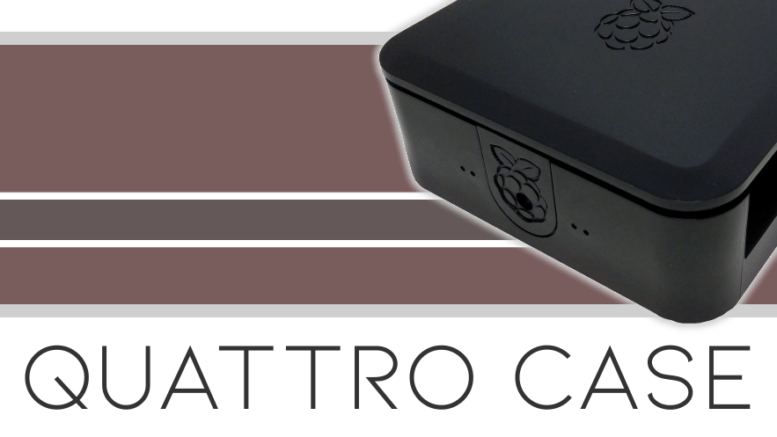 Another cracker from OneNineDesign, the Quattro is stylish yet sensible.

Whilst I wait for parts to arrive and glue to dry on my latest Arduino project, I thought I’d write a short post about something I recently took delivery of – the Quattro case.

I’ve got a ton of Raspberry Pi cases, most of which offer pretty much the same thing (protection and access to ports) in very similar styles. Raspberry Pi cases have been done to death and there’s only really room on the market for new ideas.

The Quattro feels like something that falls into that category. A different look, a slightly different approach to the usual layout and packs a few more features than your average case.

The Quattro comes in pretty decent clothes for the price. It’s not the most adventurous box I’ve seen, but it’s definitely a step up from a plain jobbie.

RS and their DesignSpark brand is dotted around the outside, however the case is designed by OneNineDesign. They’ve been in the case game for a while now, so you know it’s going to be a good’n. 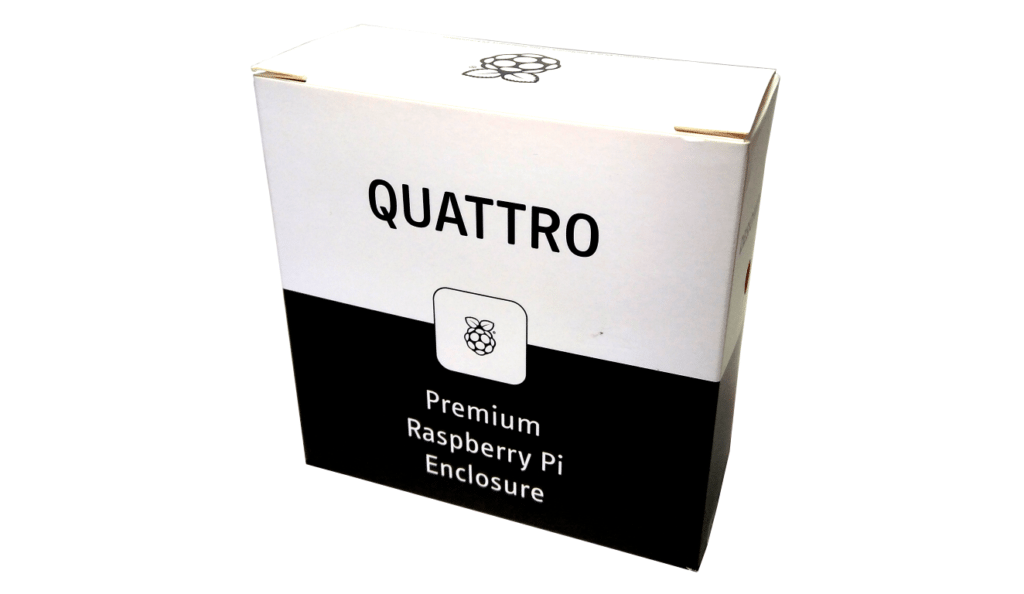 It’s a box. It’s black and white. What more do you want from me?!

The Quattro case comes with no instructions. That’s actually a bit of a let down as it isn’t immediately obvious which parts you should be pulling apart.

Once you figure it out it’s pretty straight forward, but you feel like you’re going to break something on the way.

The case is made of a few different sections that clip together, designed to allow you to slip in your Pi, HDD and camera module, then hide it all in the small stylish chassis. 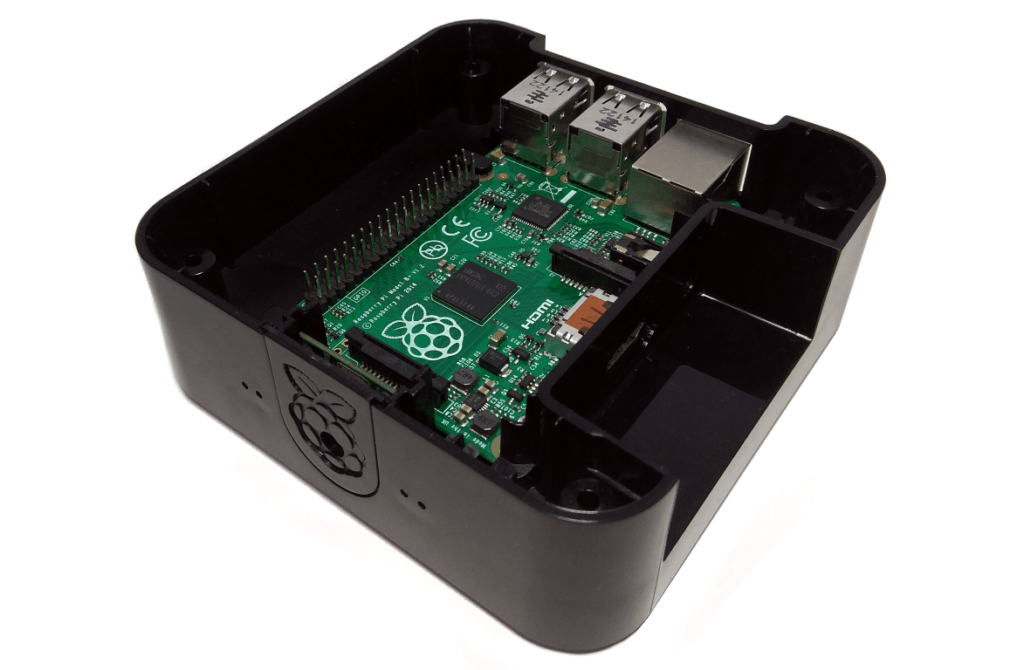 A smart layout using multiple layers allows the Quattro Case to fit everything in to a small, smart package

Despite its size and £10 price tag, the Quattro case is full of clever little details. There’s a rich feature list hiding behind the very subtle exterior of this case:

The HDD bay is a key feature. You can fit a 2.5″ hard disk in the lower section of the case, great for you media server types.

What I don’t understand is why you would want the HDD connections exposed to the rear of the case – feel free to add a comment if you know why. 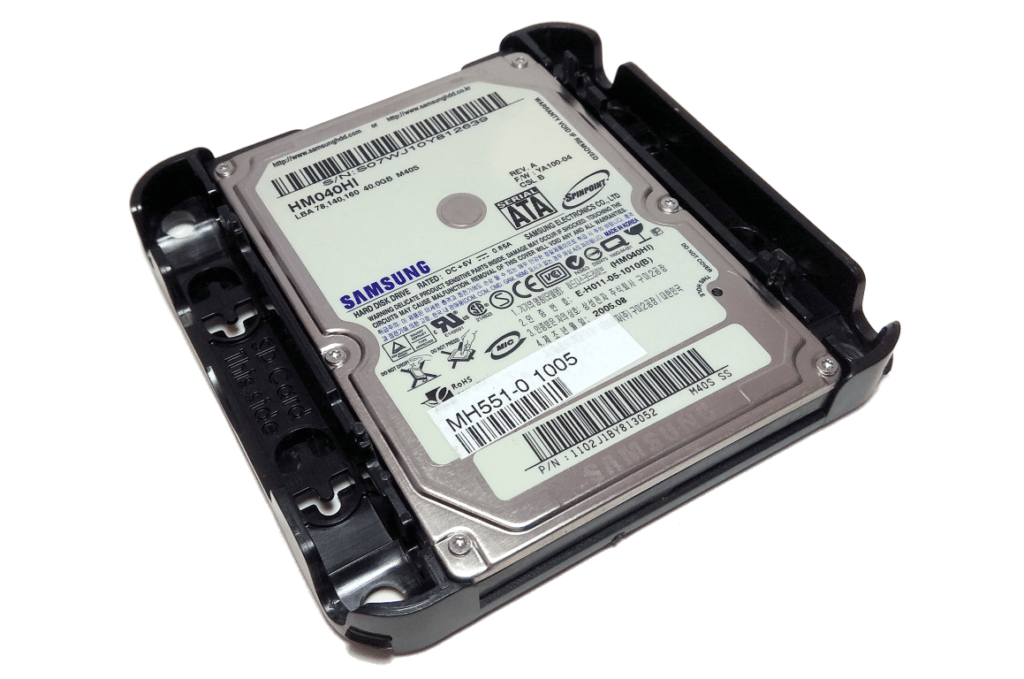 Your 2.5″ drive is slipped into the lower layer. The ports are on the outside though, which seemed odd to me.

A sneaky camera slot is located at the front of the case behind a removable plastic cover. This is interesting! It’s so ‘discreet’ it makes you wonder what the intended (legitimate) usage is for this.

Now I’m not one to judge people, but if you drive a 2001 Ford Mondeo..maybe this is of interest? Very strange. 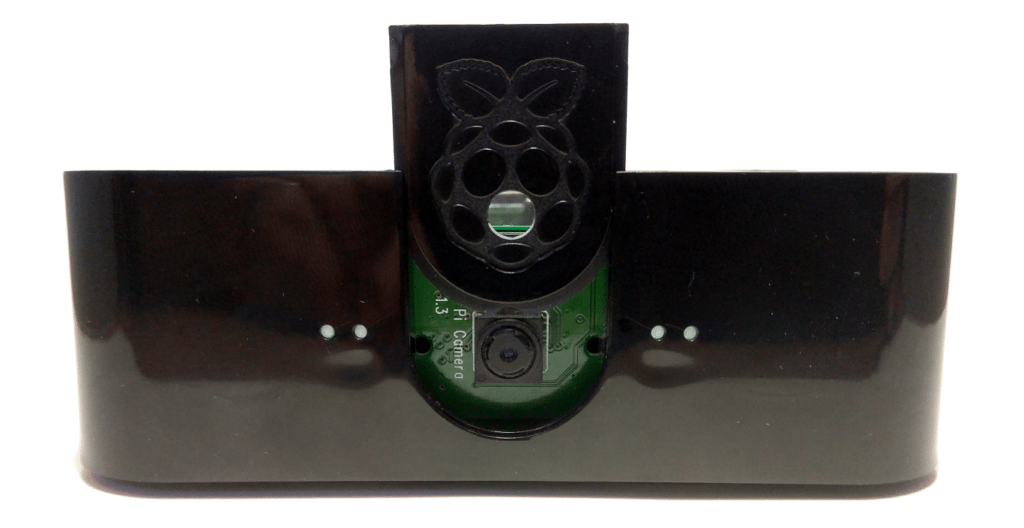 These things are becoming more common on Raspberry Pi cases, and we see them again here. Light pipes are super handy when things aren’t working as they should, helping you diagnose the Pi from outside the case using the Pi’s LED colour/sequence.

A separate bracket is provided, with spacers, that allows you to mount the Quattro case to the rear of your screen/monitor. No screws are provided, so you’ll need to get those yourself (M4 usually I think). 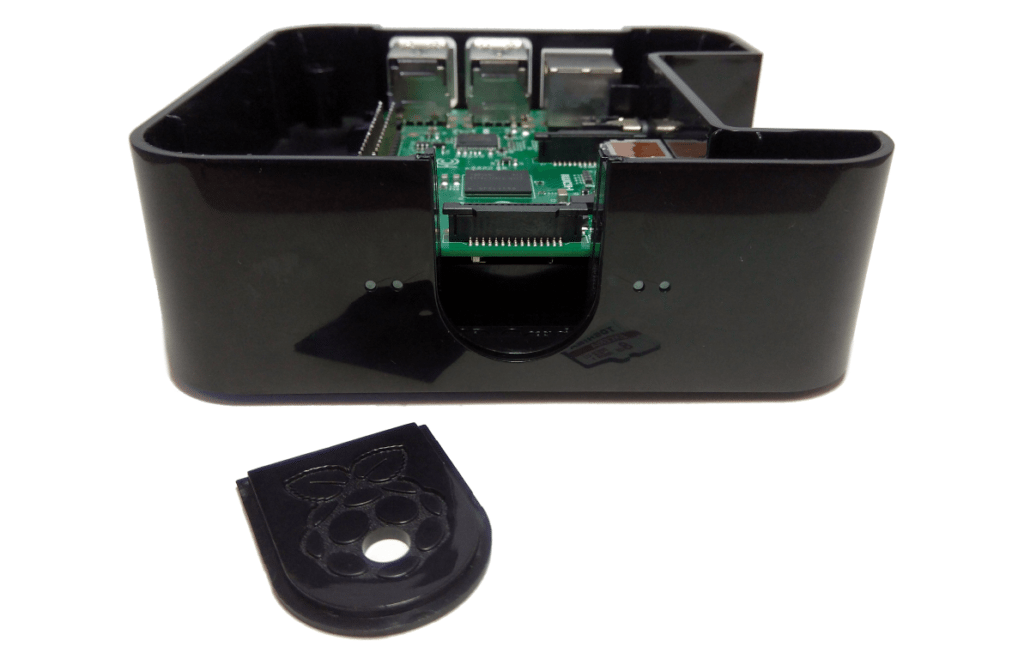 Considering the price, I reckon this is a good shout for anyone after a decent home for their media server project.

Is it the ultimate media centre case for your living room? Yes and no. It comes close, but you can’t expect the world for £10.

It’s got the living room looks going on, the HDD drive for storing media and the hidden camera might be useful to some (wink), however cables still come out of every angle and there’s no option to add a fan (geeks dig fans).

Is there a better case out there – perhaps not. The original Short Crust case came close with its clever relocated power port, but that won’t accommodate newer models of the Pi. 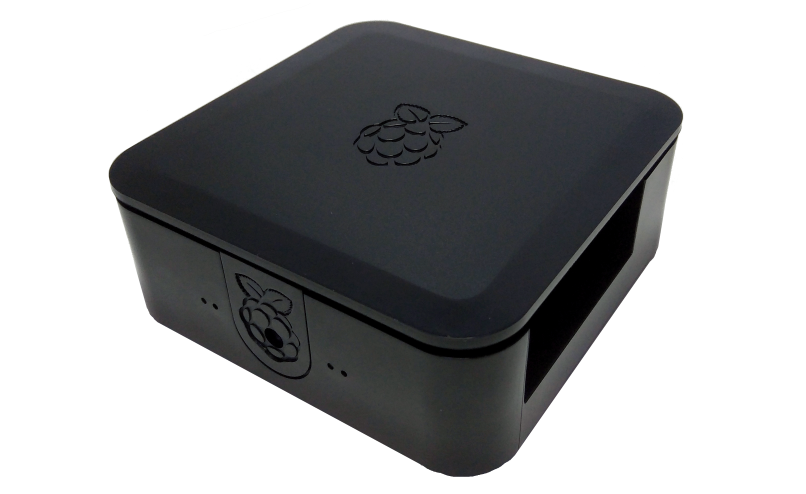 It’s a good looking case that blends in well with other media boxes.

Get yourself a Quattro case from ModMyPi for £10, available in black, white, clear and red.

Right – I’m off for a drive in my Mondeo…

How to Overclock OpenELEC on the Raspberry Pi