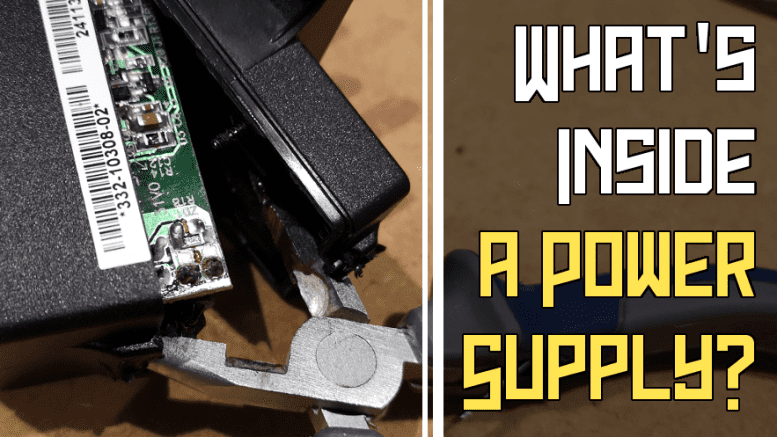 What makes those 'black plugs' warm? Why are they so big? What's inside? Let's find out!

I last tore apart some helpless hardware way back in 2016 after my daughter made an excellent drinks stirrer out of my posh new OSMC remote.

Luckily I’ve had no similar accidents over the last couple of years (I only let her out of her cage on her birthday now), however I ran out of good fortune a week ago.

I’d bought an Ethernet switch on eBay which didn’t work when I plugged it in. Yep – eBay. You know the place. Where chancers get away with selling broken stuff as ‘used once’ and in ‘like new condition’. Rats!

A quick test revealed that it was actually just the power supply that was dead, so as per my previous dead hardware, I’m using this opportunity to break stuff open and have a nosey at what’s inside!

Hand me my scalpel… 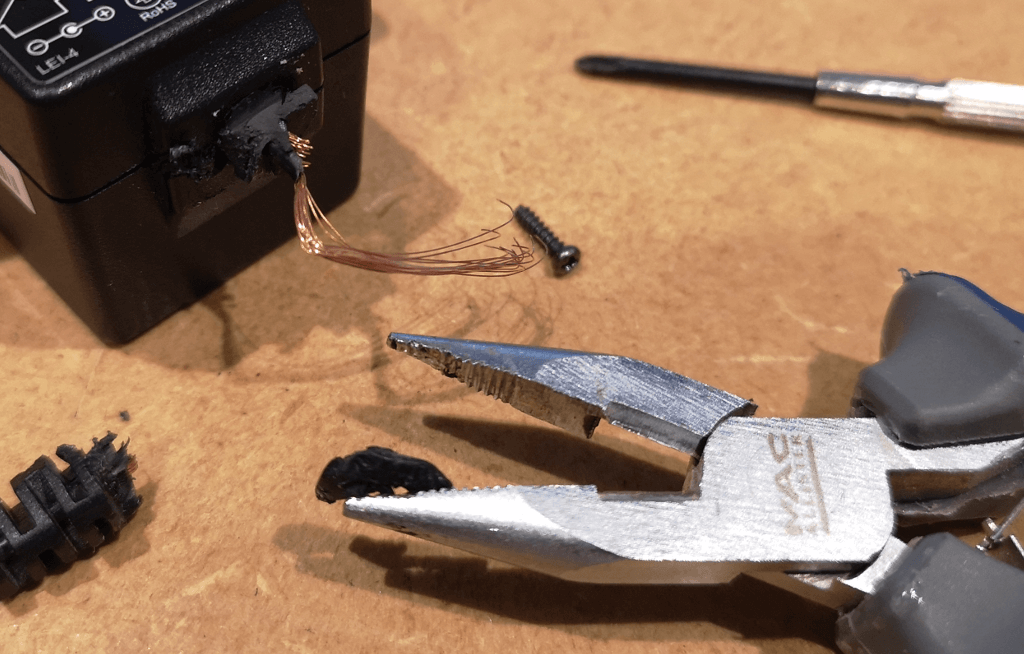 Cheap nasty tools have their place in this world

I thought I’d quickly touch on how I tested the switch to identify that it was just the power supply that was fried.

I used my multimeter to test the PSU’s output, and the readings were very low. Something wasn’t right, so I decided to dive in head first.

I chopped the connector off of the PSU then wired it into an adjustable step-down converter that I had in my box of parts. I plugged a 12V feed into the converter and set the output to 7.5V, then plugged it into my switch – and bingo, it was ALIVE!

The cool thing about learning electronics via projects is that you gain useful skills. This eBay'd switch wasn't working 😒, so after testing the PSU with a multimeter + getting no V+, I chopped the wire, plugged it into this converter and tested. Now works, so the PSU was dead. pic.twitter.com/IpmfacDfxk

With the PSU confirmed deceased, the only logical thing to do was tear it apart in the name of research.

Ever since I was a child I’ve just looked at these as ‘the warm black plugs’ and hadn’t ever seen the inside of one. After 32 years of mystery, it was time to find out.

First job – getting inside. Understandably these things aren’t easy to crack open.

After removing the only visible screw, I had to use all of my bodging power to prise the casing open with my incredibly cheap n’ nasty pliers. 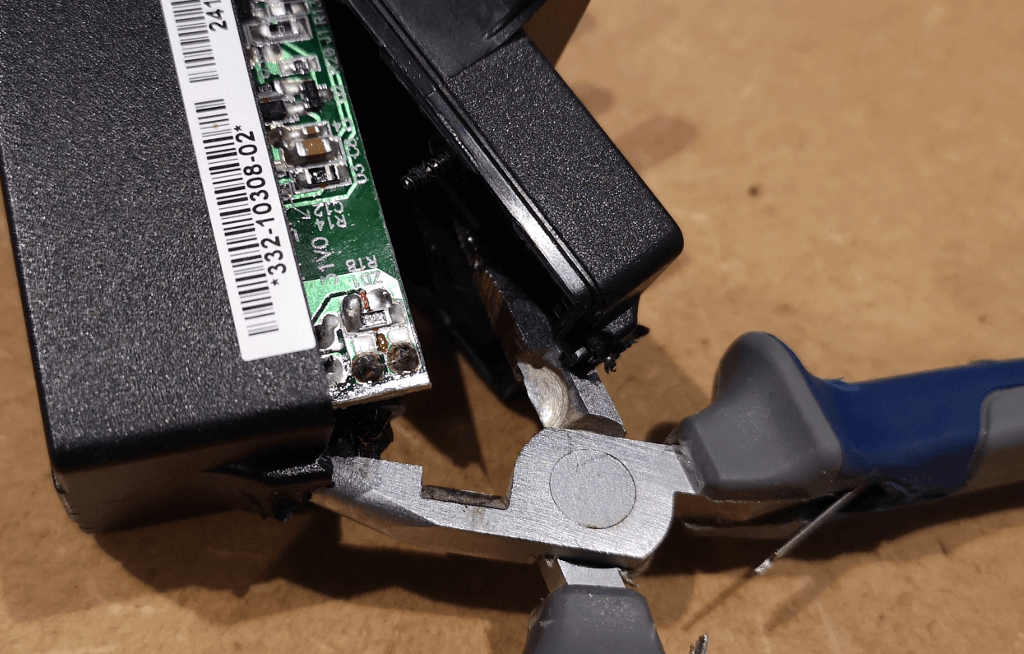 Inside was a very packed out PCB that – to me – looked too hand-soldered and messy to be an off the shelf retail product from a reputable manufacturer – but what do I know?

I did the usual, looking for identifiable components and anything else of interest. 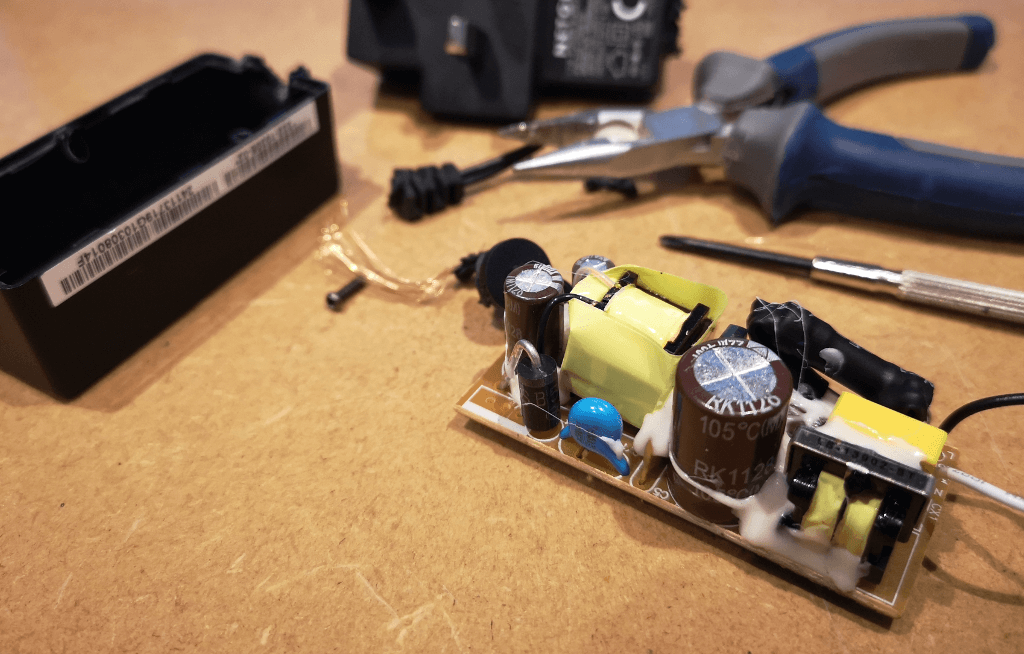 I know everything is made in China, but this just looked a bit too Happy Shopper for a big brand UK retail product

The first components I recognised were the big capacitors. Most makers know an electrolytic cap when they see one – the tall ‘silo’ style cylinders that we see regularly: 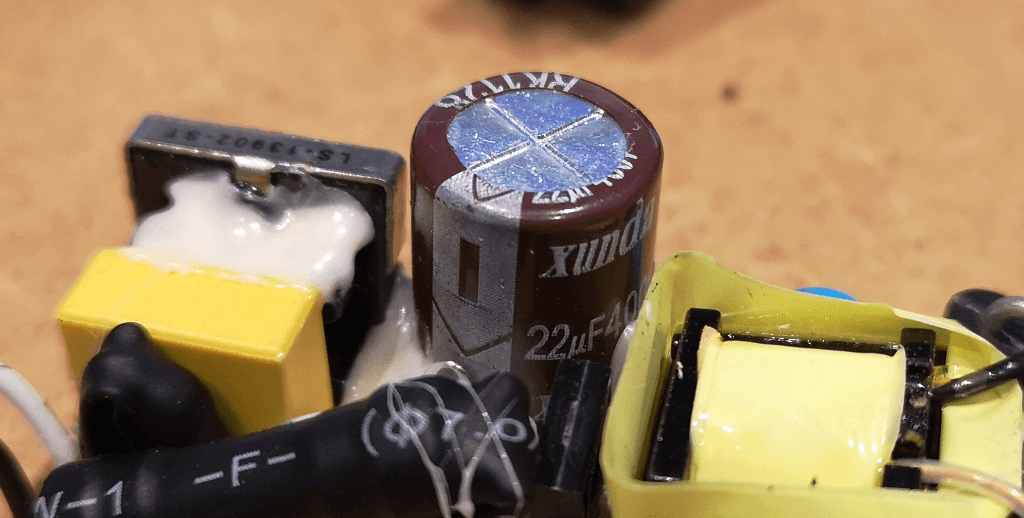 Then there was a big yellow cube in the middle? What was this thing?

I peeled back some of the plastic wrapping to reveal the copper winding, which (with the help of Google) confirmed it was a transformer: 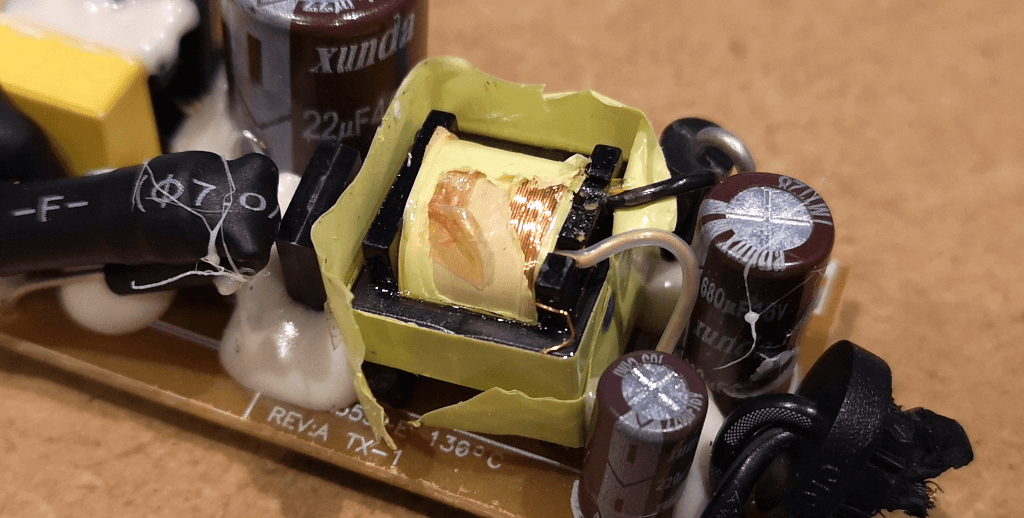 The yellow cube turned out to be a transformer. Wonderful.

That transformer wasn’t alone either – in the opposite corner of the board was another similar-looking component. I Googled the code on the top (LS 13902-ST) and it indeed turned out to also be a transformer.

I don’t know why a power supply needs two transformers of different types, but I plan to find out: 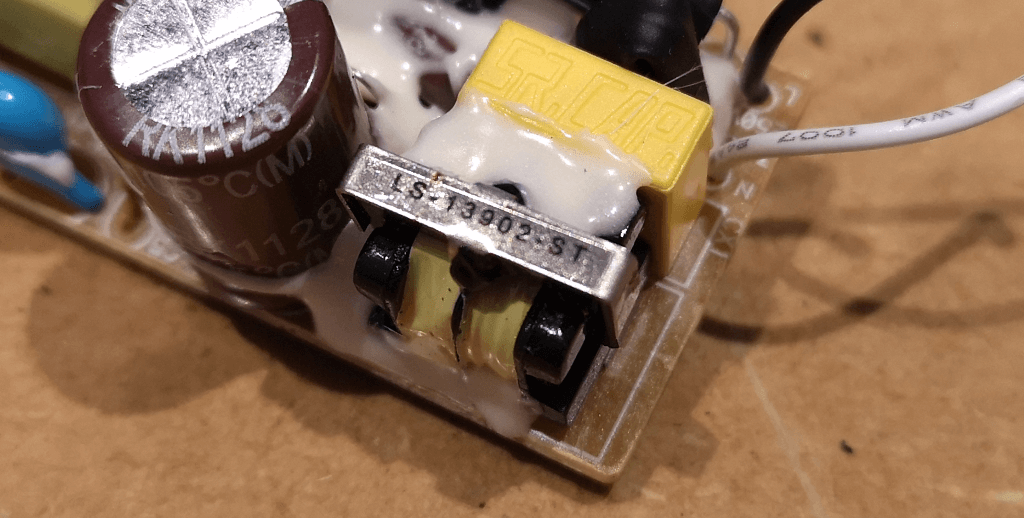 Another transformer? I wonder why one isn’t enough? I bet if I look hard enough, I’ll find a third…

Just behind that transformer was a solid yellow box with ‘SR CAP’ written on it. A swift search identified this as a polypropylene film capacitor.

Wikipedia suggests these are widely used to suppress EMI (electromagnetic interference), which I guess would make sense for a switch power supply. 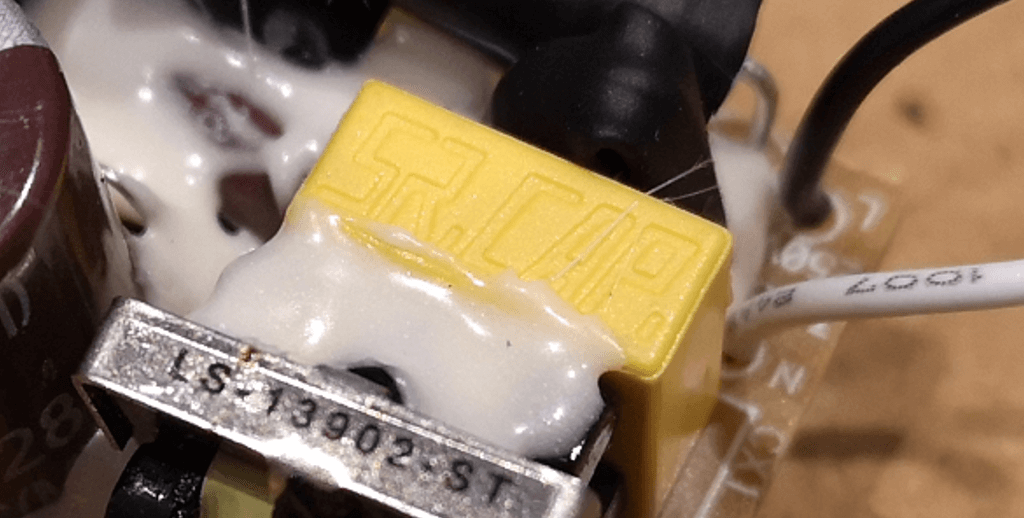 I’d not come across polypropylene caps before. Teardowns are a great way to improve your awareness of different components.

Apart from a ton of glue, more caps and a big-ass diode, there wasn’t much else to see on this side of the board, so I turned my attention to the rear.

I found an article on bridge rectifiers which showed that they’re used to convert alternating current (AC) current to direct current (DC). That makes sense considering the stuff coming out of my wall socket is AC, and the Netgear switch wants 7.5V DC. 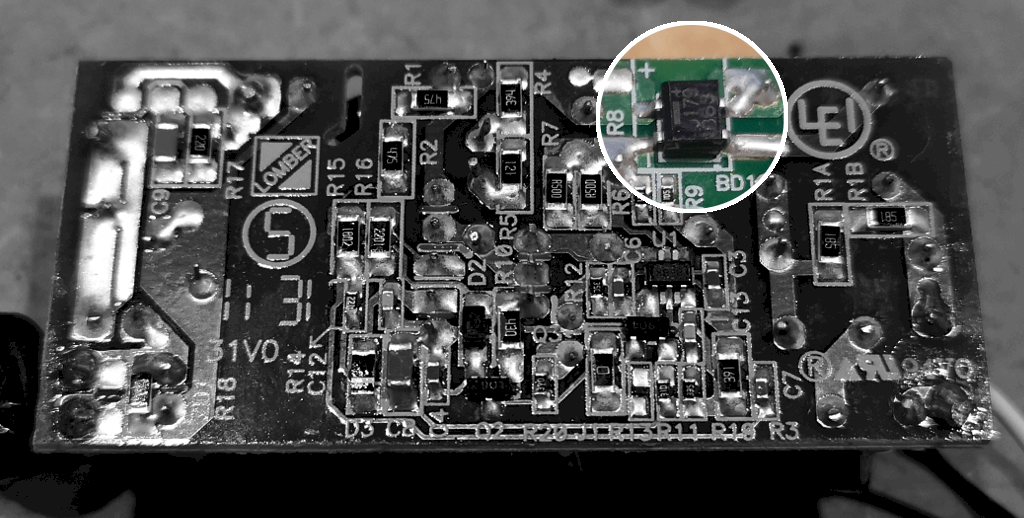 Amongst the mass of caps and resistors was a lonely bridge rectifier.

So that’s about it for this power supply ‘teardown’. Mystery over – I now know what lurks within the ‘warm black plugs’.

Hopefully you found this as interesting to read as it was to pull apart. Feel free to comment if you’re more educated on power supply components than me (pretty much everyone…).