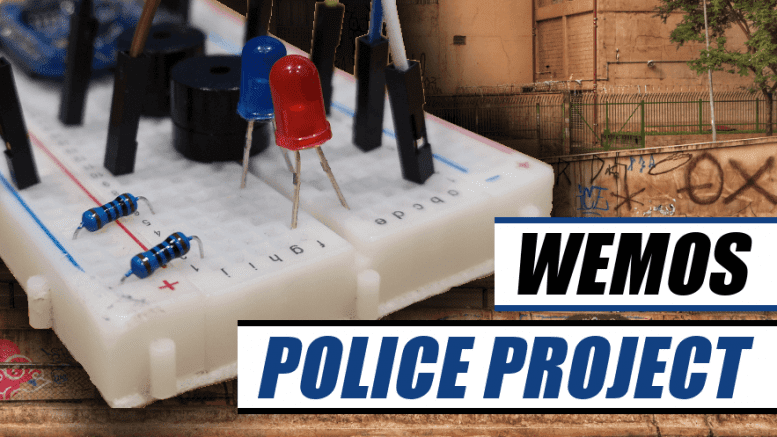 Ah yes, classic lines from some of my favourite cop shows. The drama and excitement of policing is fun to watch from afar, but I don’t think I’ve got the plums to do that job myself.

For those of us hiding in the safety of our living rooms, there is a way to feel like you’re riding the ‘blues and twos’…albeit a bit of a nerdy way…

We can’t do this whilst we still feel like helpless civilians, so I refer you to my brother from another mother KRS-One to get you into street cop mode *whoop whoop*:

This project hooks up two buzzers and LEDs, and with some simple it’ll make sounds and lights just like a bank-robber-chasing meat wagon.

The buzzers make use of a nifty Arduino ‘tone’ command which makes it easy to pump different tones out of the buzzers.

This is a nice simple project, requiring readily available and affordable parts:

How to make it

Here’s a Fritzing diagram showing how I have my circuit hooked up:

Here’s my breadboard project to give you an idea of what that looks like in real life:

So it’s simple enough – each of the LEDs has the negative leg going from GND through a resistor, and the positive leg runs to a GPIO pin. The buzzers are the same just without the resistors. Easy!

How to Code it

If you haven’t yet set up your Wemos D1 Mini in the Arduino IDE – check out my post on that here.

We’re going to be turning the GPIO pins on/off to make our LEDs mimic a hot in action.

We’re also using the Arduino ‘tone’ command to produce a different tone for each buzzer. This should give us the unmistakeable ‘‘ sound of the fuzz.

Here’s the example code which is used in the video above. Check out the comments for tips, and play around with different tones until you’re happy with it (see tone codes at the end of this page):

Where to use it

Whatever you do with this, I think it’s an easy and engaging beginner project for kids or new makers. I hadn’t done much with buzzers previously, so I used this as a fun way to learn (whilst also learning about the handy Arduino tone command).

I like the thought of integrating it into a police-bot – a police-themed robot project with something like this sitting on top. People keep making the same old robot projects without any thought for theme or style.

How about a bedroom alarm? Your little brother won’t snoop around your room if you have this going off (in conjunction with a PIR sensor). You could even take advantage of the built-in WiFi to alert your phone when it triggers!

The MyPiFi LED Board on Kickstarter