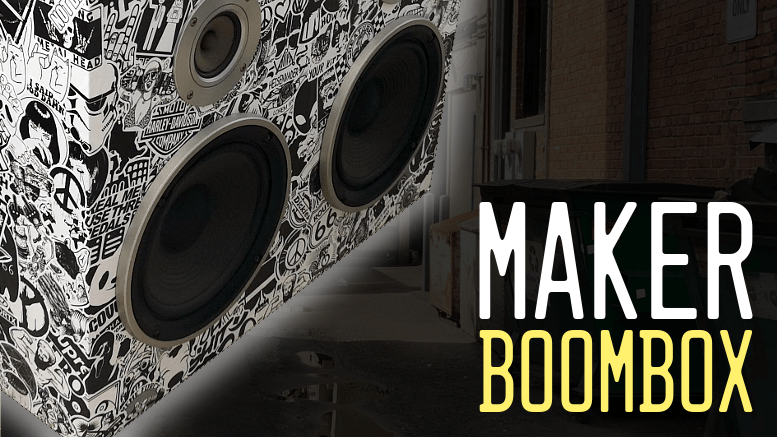 Reviving my old speakers - this project technically started in 1983

It’s been a while since I wrote anything here. The summer’s funny like that – it’s all ice creams, wasp stings and sweat. Now that the weather here in the UK is turning colder, I’m ready to stay indoors, get fat and make stuff.

Something I did work on this summer is my Boombox project. My roller hockey team wanted some music whilst we played, and being in a large sports hall meant the usual Bluetooth speaker option wouldn’t have been up to the job. 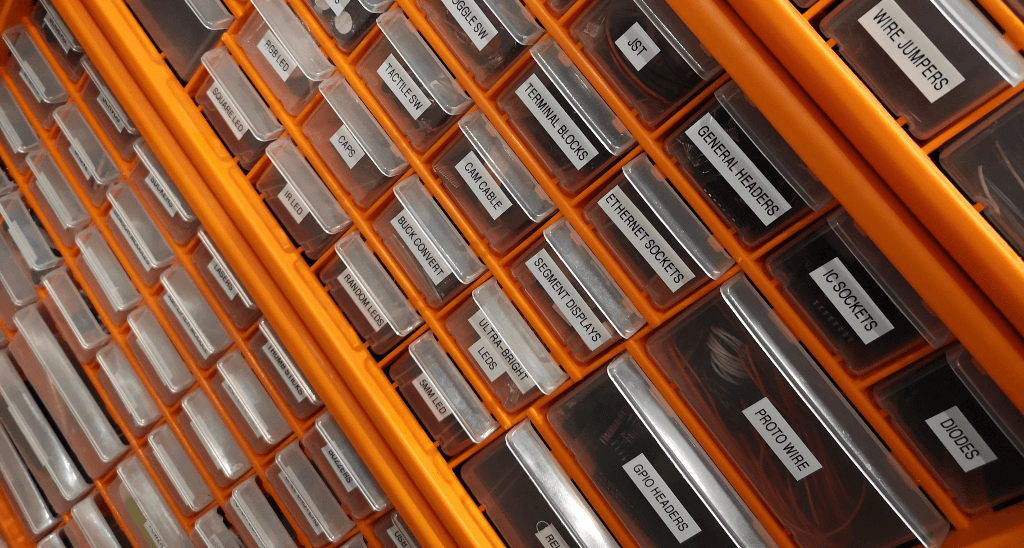 I headed for Papa Average’s loft, as I remembered that 21-year-old me left a couple of old speakers up there when I left the nest.

To my surprise they were still up there, and in pretty good nick too. A pair of Technics SB-3150 speaker boxes from a Hi-Fi born in 1983. Japan’s finest!

I couldn’t admire them for too long as I’m shit scared of spiders – so I came down, chucked them in the boot and made my way home. 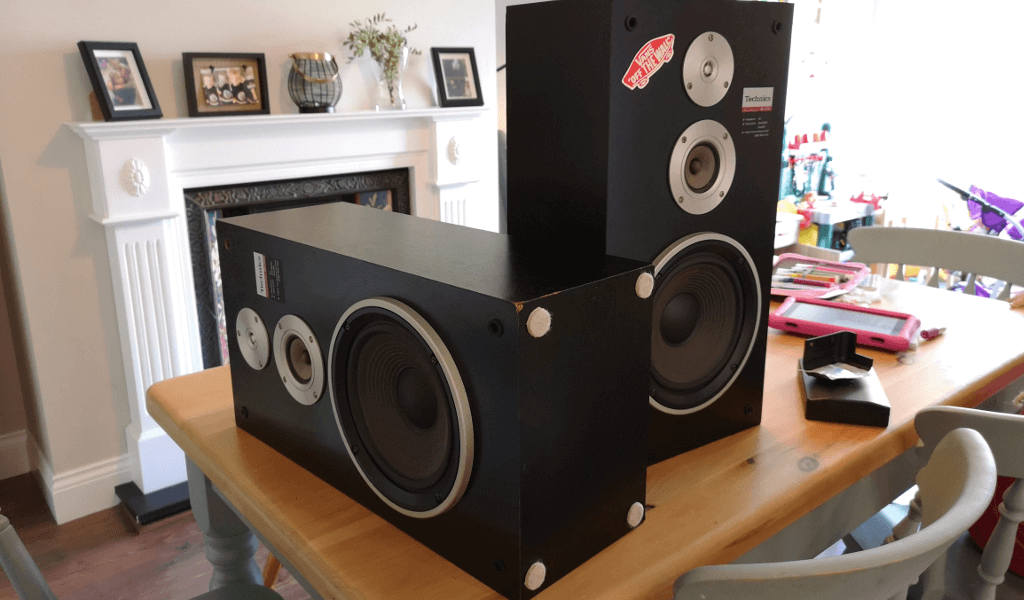 These things are NOT light

Now these speakers weren’t active (active speakers = speakers with an amplifier built-in) but I already knew what I wanted to power them with.

Many moons ago I bought an Adafruit MAX9744 amplifier module whilst loading up a credit card fuelled basket. I had stored it away for years, and now it finally had a purpose in life. 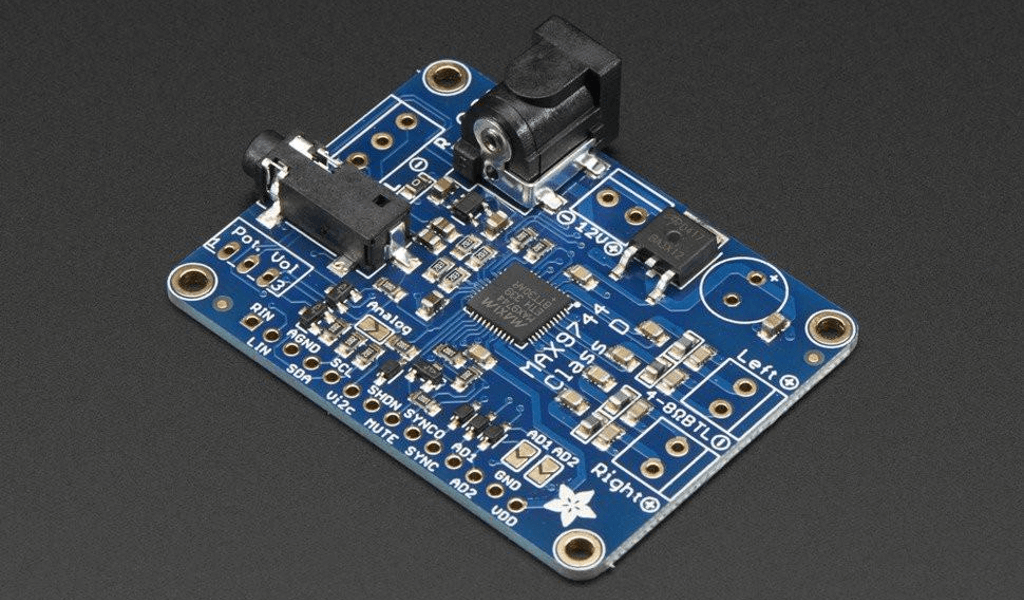 A quick check of the spec confirmed it would work with my speakers. 8 ohms and 80W would do the job – a project was born! 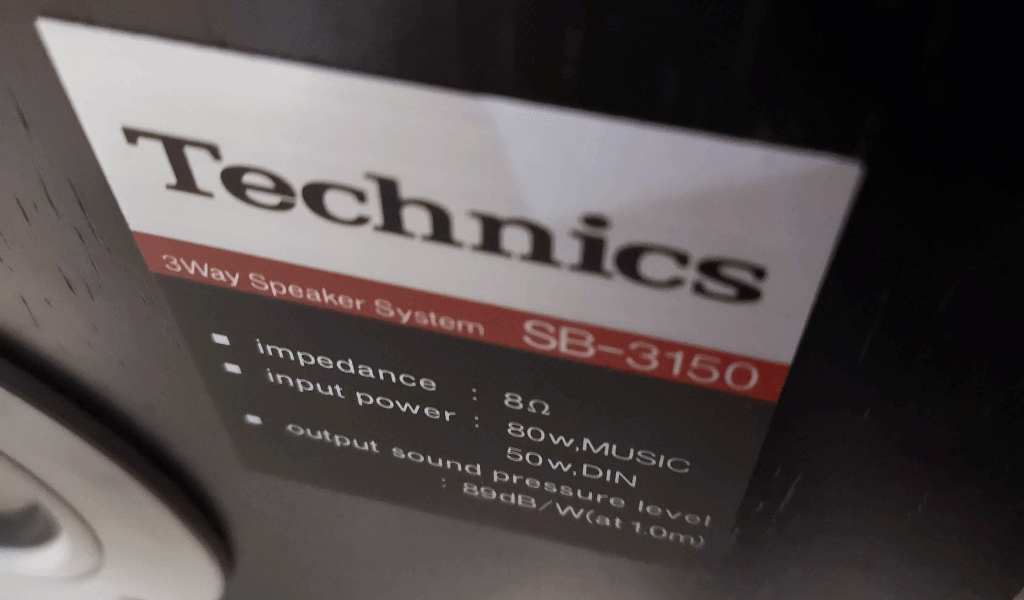 These speakers could take much more abuse than the MAX9744 could throw at them. A safe bet.

First I wanted to test the circuit before I started banging any holes in to my vintage speakers.

I had already assembled the MAX9744 module previously, so that saved me a job.

It’s a very simple bunch of wires – I hooked up a single speaker to one of the amp outputs and used a simple 3.5mm male-to-male jack cable to allow my phone to provide a bit of Beastie Boys.

Lastly was power – a standard 2.1mm barrel jack connection meant that I could use an old 12V TV box PSU I had stashed away (the amp can take 4.5-14V).

…and everything worked a treat! 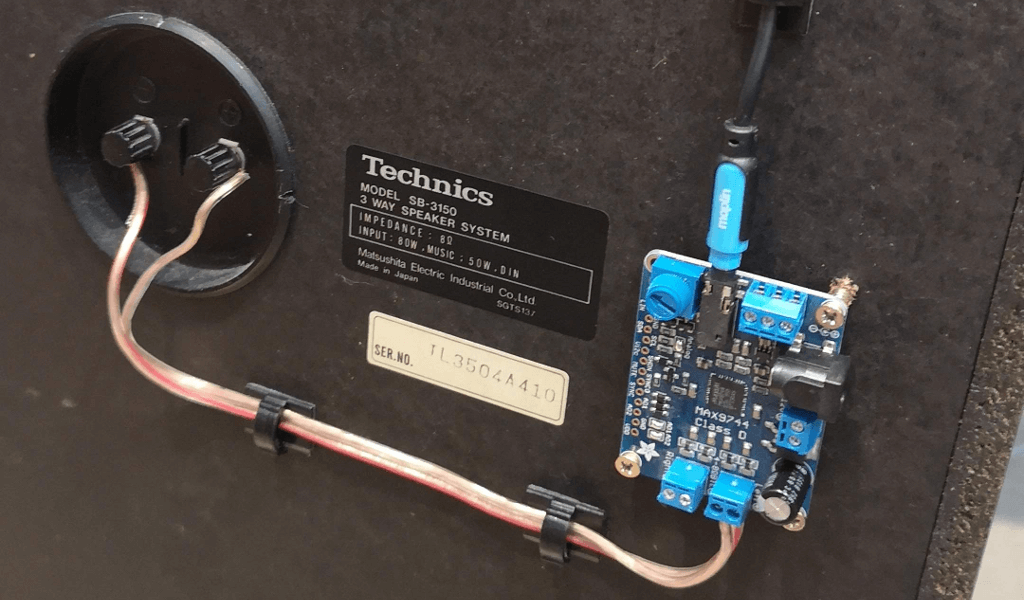 Now the fun part. My plan was to join the speakers together to make a single beast of a boombox, with the amplifier and other guts hidden away inside.

I took the main speakers out and had a nosey around. There was plenty of space to play with, so without much hesitation I measured up and started pumping in some holes: 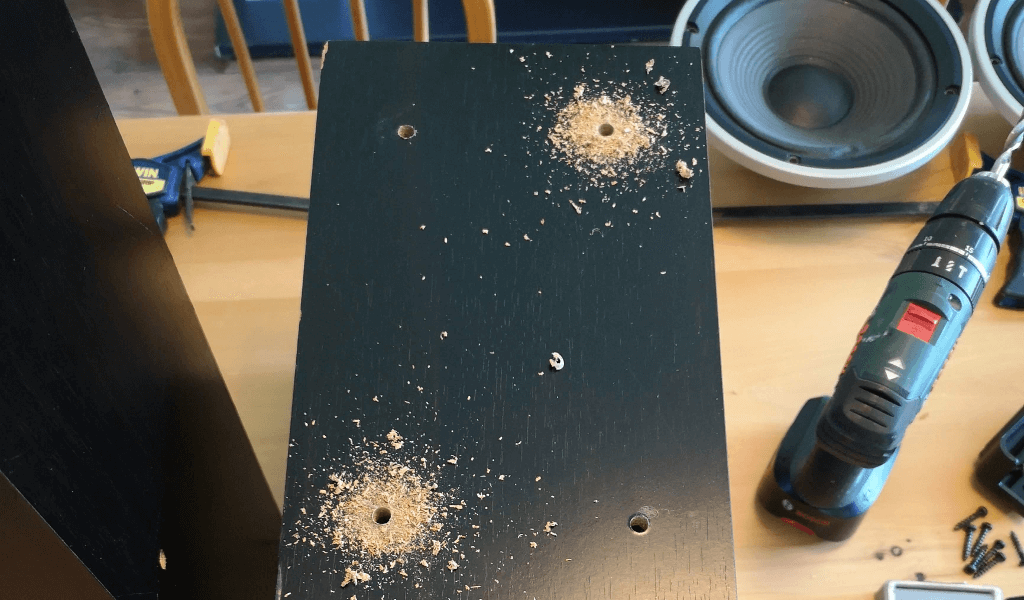 More holes than a BREXIT deal 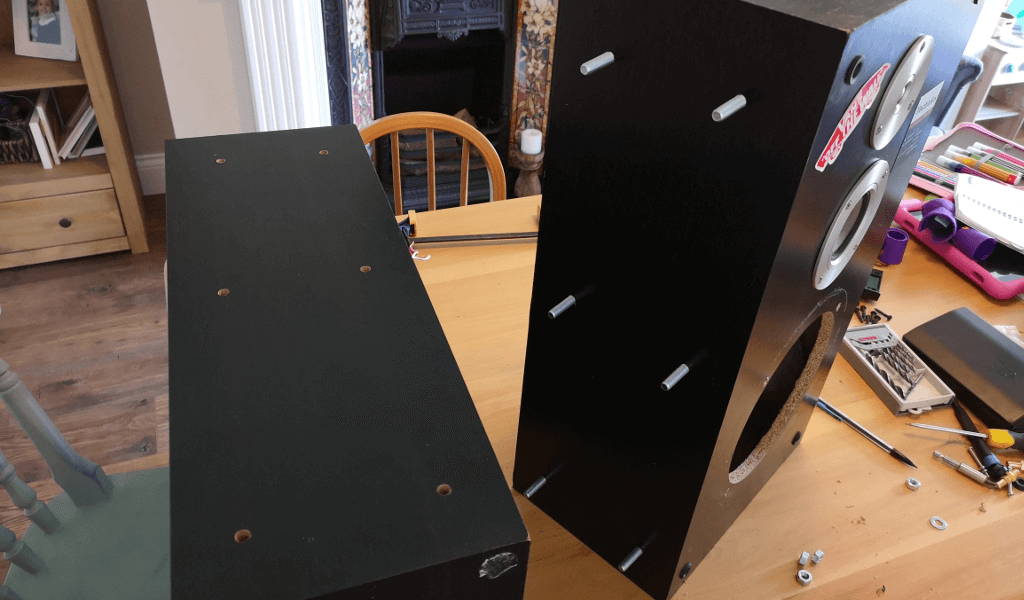 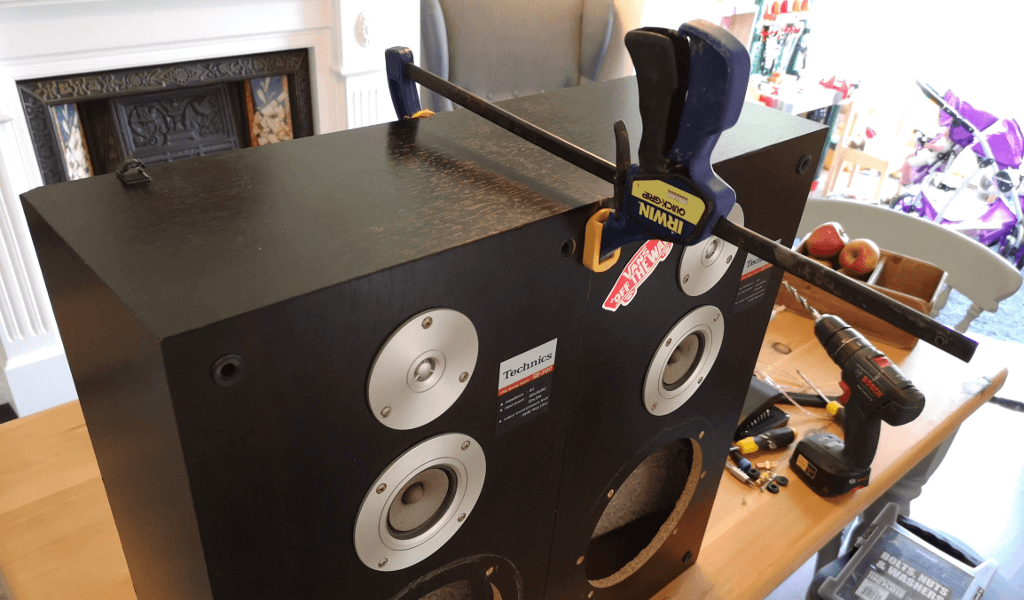 I clamped the speakers together and tightened the bolts

I then chucked on a plastic handle I had from another failed project, some rubber feet from my maker drawer, and stood back to admire the fridge-like monster that I had created: 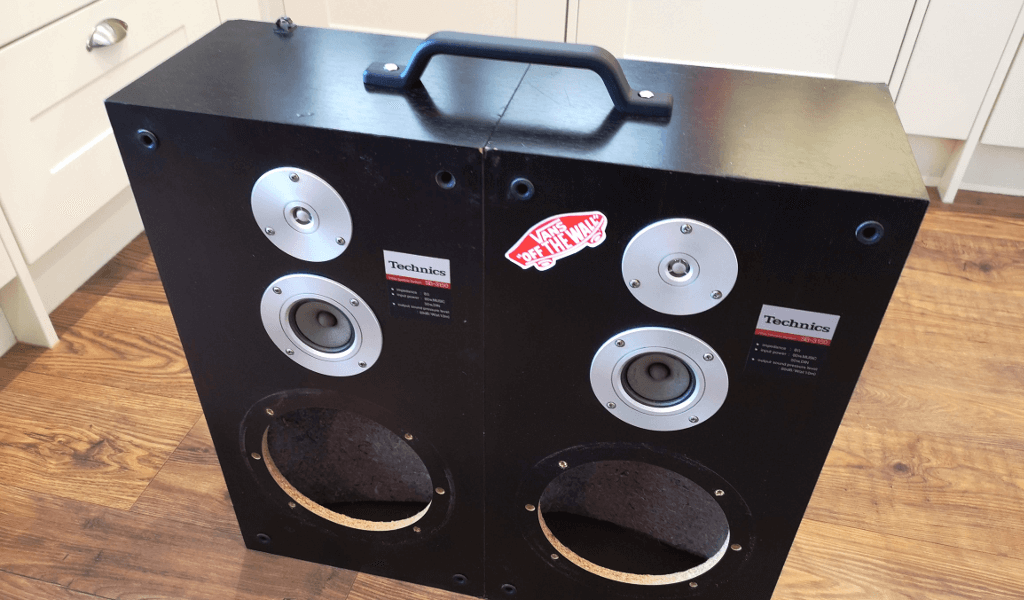 Not quite a work of art just yet

Now the tricky part – working out how to connect everything inside the box whilst also having access from the outside.

I used my phone camera to have a peek inside the box. The smaller speakers all ran off the larger one, so that would work well as I only had 2 channels to connect to on the amp.

I popped out the speaker terminals and decided to solder wires to them from the inside. I drilled holes through the middle of the two boxes to route these wires through to one side for connecting to the amp: 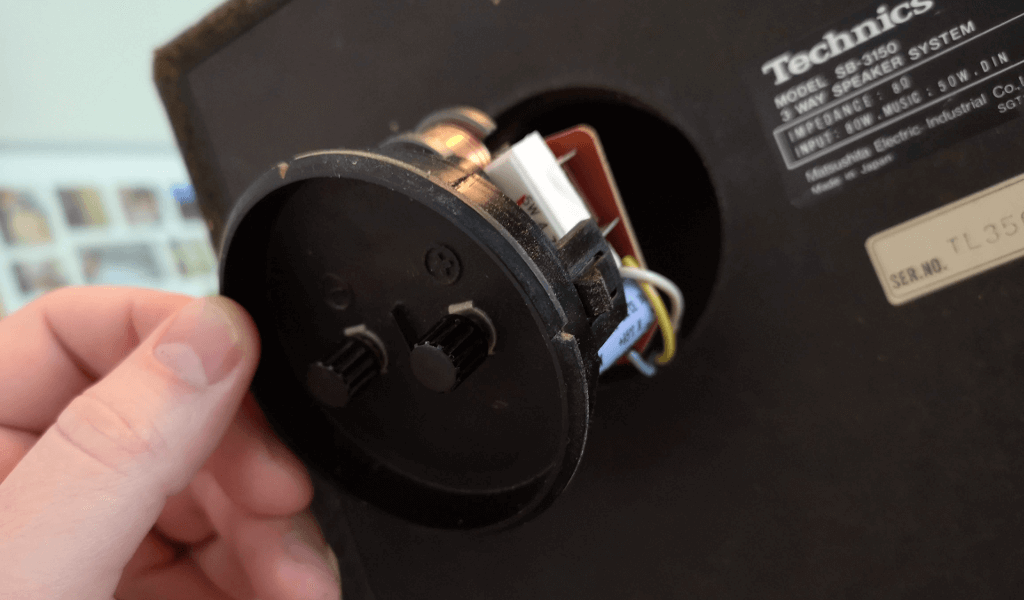 The terminal came out with ease. 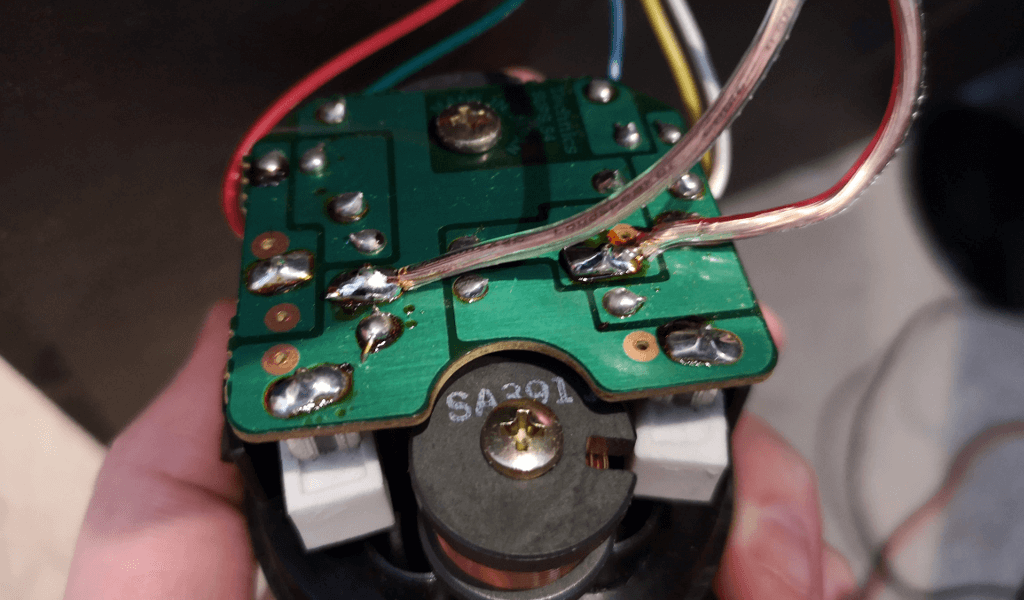 It’s OK, no one will ever see this shabby soldering again

I now needed to think of a way to mount the amp module inside the box but also gain access from outside, to allow me to disconnect cables when travelling with this big girl.

The wood was too thick for most panel-mount fixings so I took apart an old project and stole the plastic casing from it. After some marking up, I cut a hole at the back of the box to accommodate this acrylic panel, then added some screw holes. 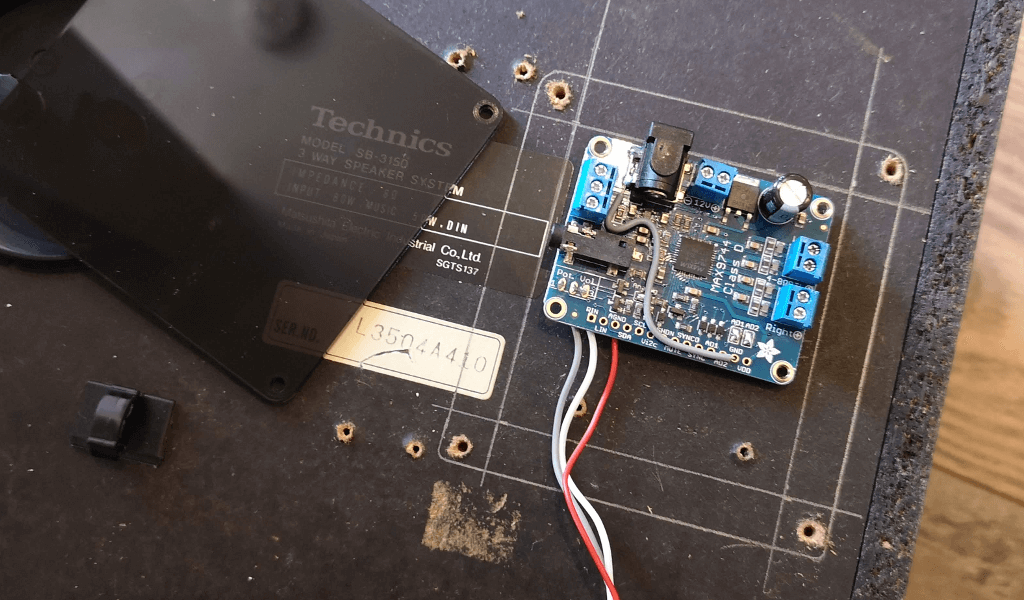 Measure once, cut twice. Sure… 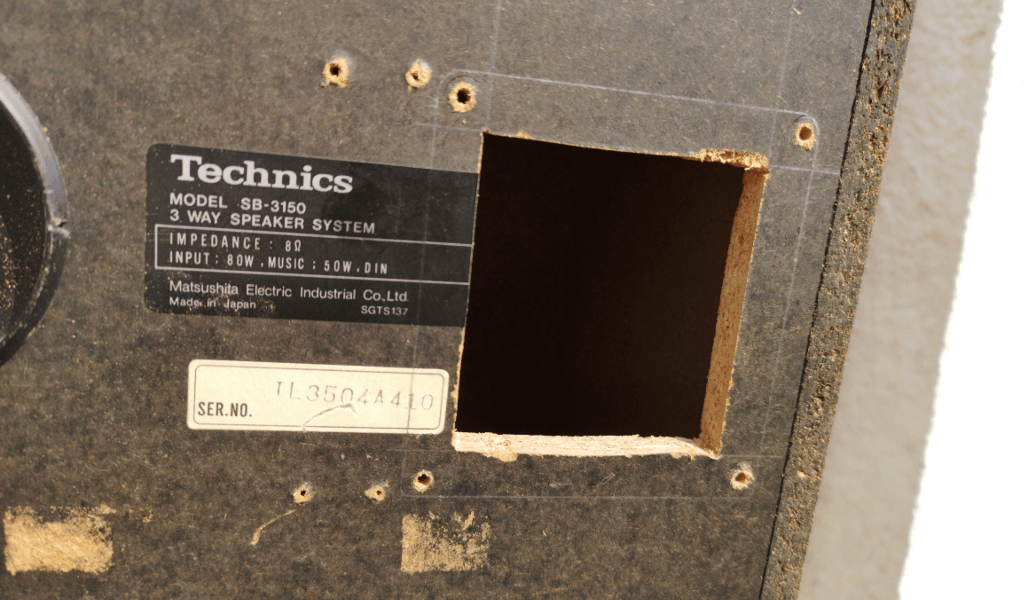 I added panel mount fixings to the acrylic for the audio in and power, then drilled some holes to fix the amp to it using spacers.

I used RCA connections because that’s what I had in my bits box (as well as an RCA to 3.5mm jack cable). 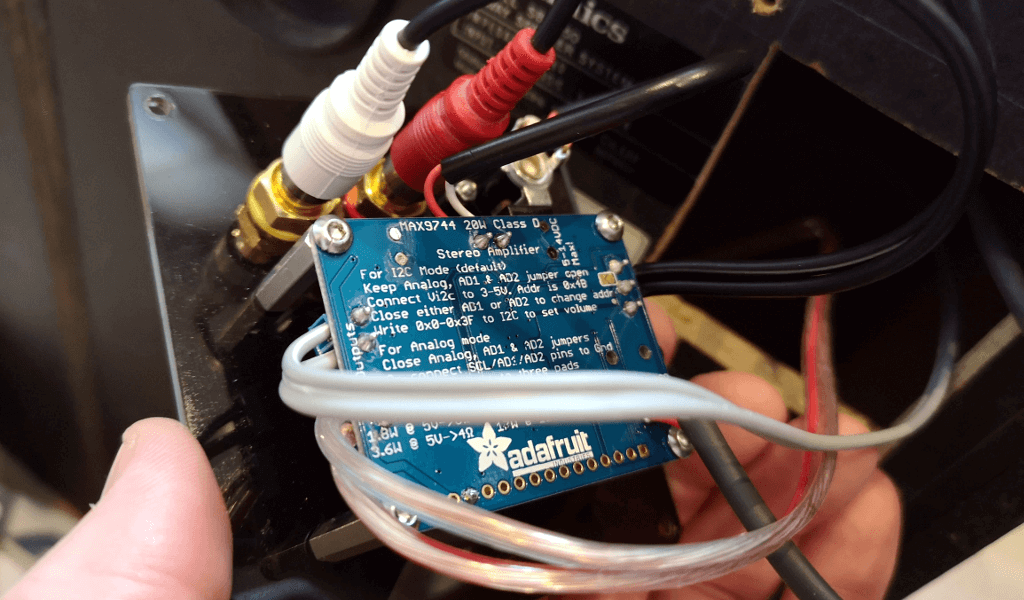 The project started to take shape at this point

A quick note on Bluetooth –  I initially wanted to add Bluetooth connectivity to this speaker, however I tried one of these cheap modules and quickly found out that the sound quality wasn’t as good. I soon went back to wires.

I also de-soldered the potentiometer that came with the amplifier kit and added my own panel mount pot.

Again, I had to knock up a thinner round panel for this to mount to, which would be attached to the top of the speakers for quick in-game volume control: 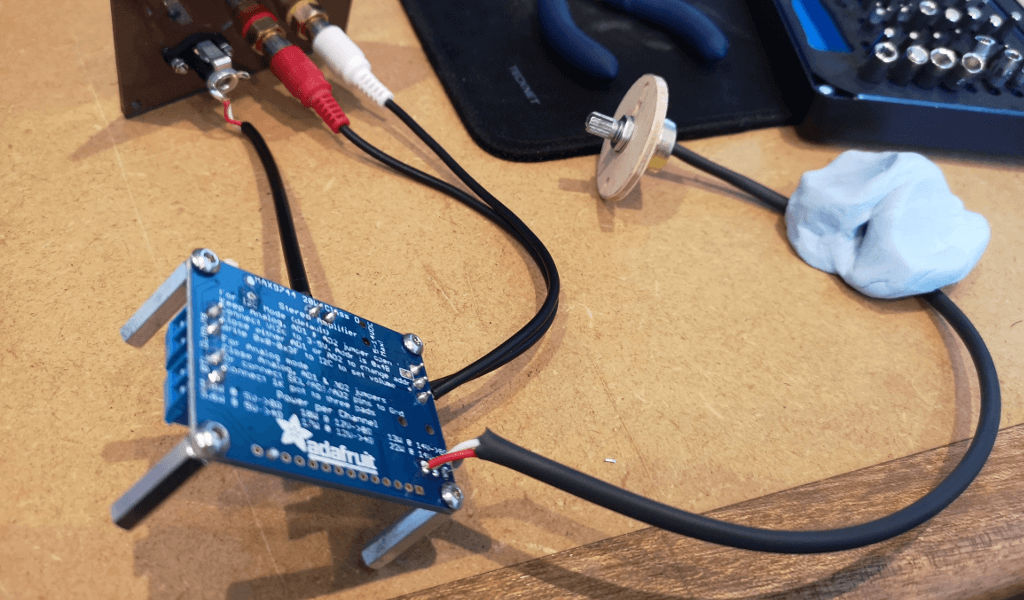 An easily accessible volume dial was an important feature

The whole thing then screwed in to the box using some metal fixings I had spare.

You can see that I made a bit of a mess of the power hole, but cutting acrylic manually isn’t easy and it didn’t have to be perfect – it was going to be exposed to 100mph pucks after all. 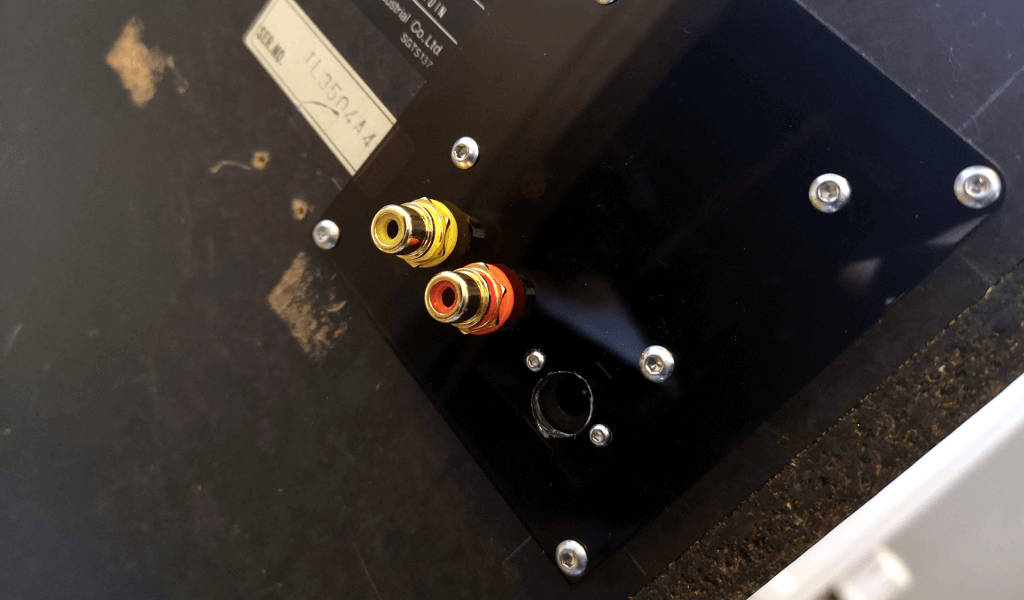 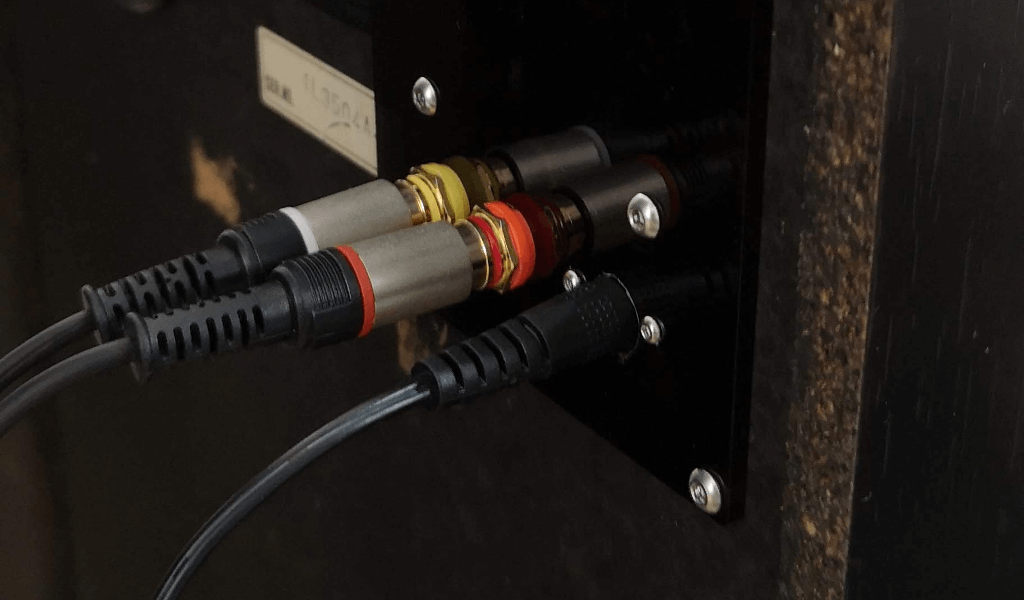 Here’s the view from the inside: 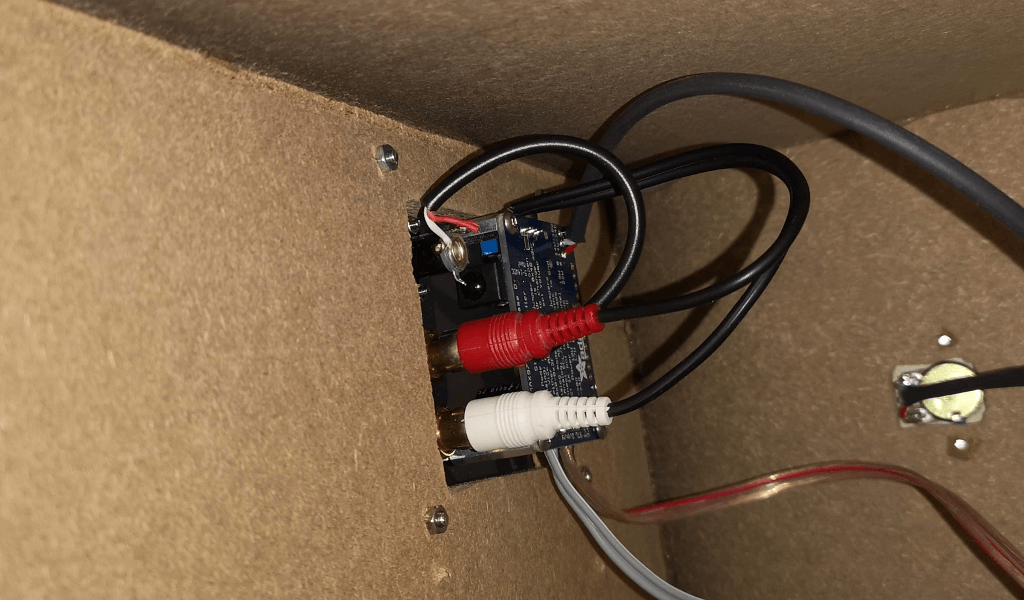 The guts. All the guts.

I fired it up and had a quick blast. It was loud, VERY loud. This little amp the size of a matchbox is incredible!

After pissing off the wife blasting out ‘Fight For Your Right‘ for an hour, I realised something…it sounded great but looked butt ugly.

So now I had a working ugly Boombox. Time to fix that.

I jumped on AliExpress after remembering seeing ‘sticker bomb’ packs on there previously. I found some cool random black and white packs and ordered something like 500-stickers in total.

Then…I went to town on her! 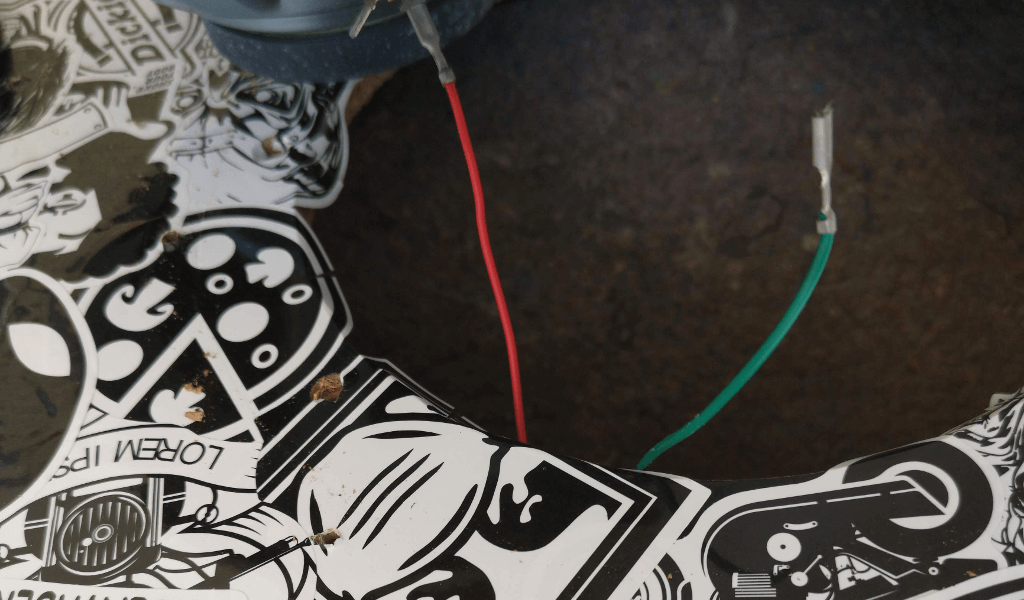 Hiding the cuts and scuffs is easy with stickers 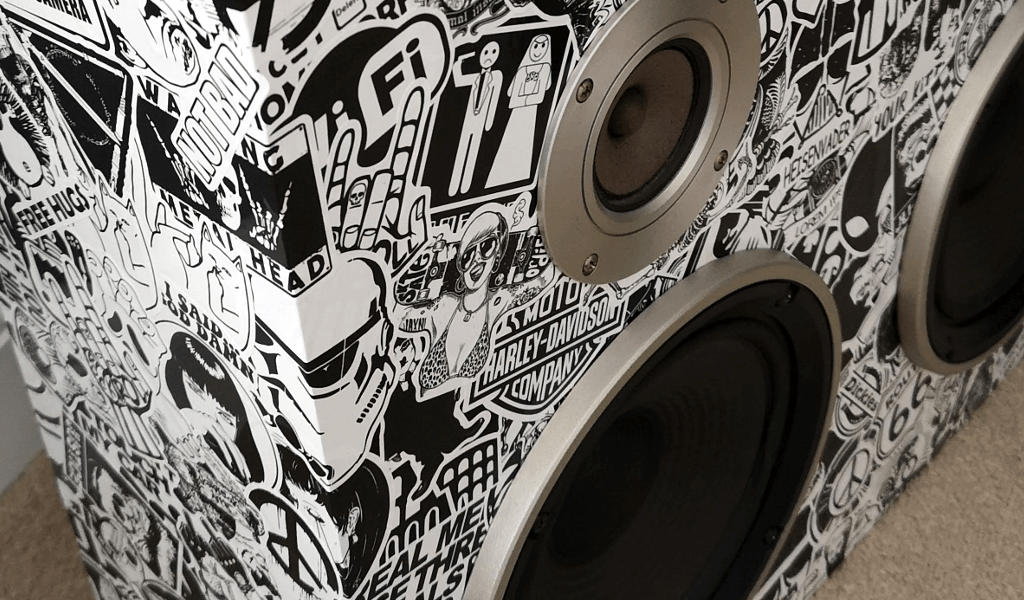 Easy, cheap and effective. I’ll definitely do this again. 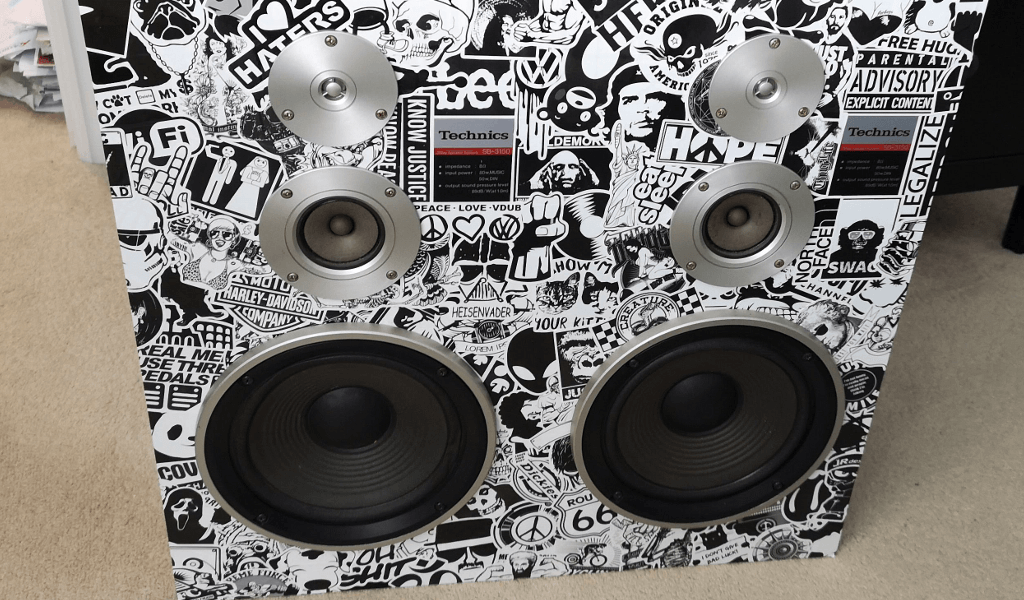 Half way through adding the stickers my team mates mocked me for not considering any kind of speaker protection. Fair one – those paper cones wouldn’t last long in battle.

Back to AliExpress and I found some not-so-cheap speaker grills which would fit the black and white theme perfectly. I had to grind the speaker surrounds down a bit but they eventually went on: 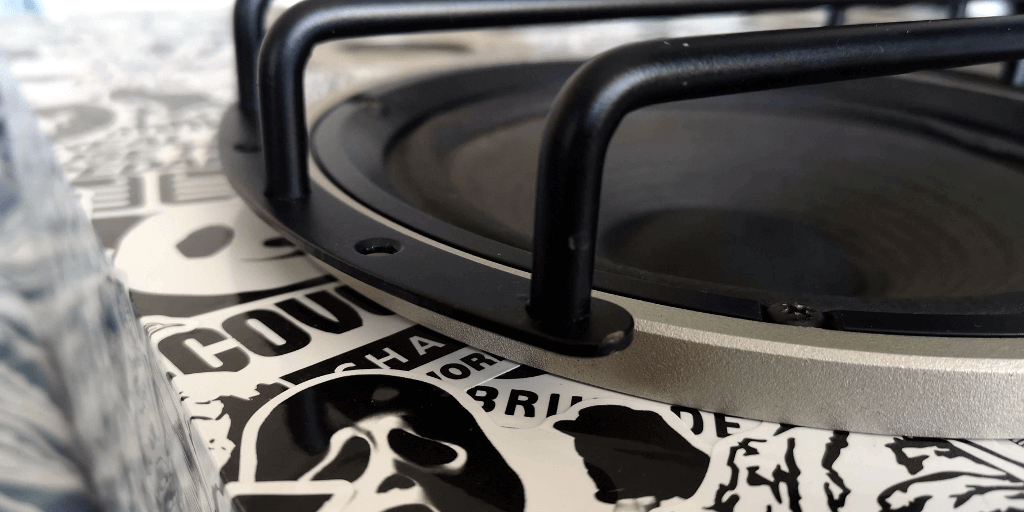 These worked well, and I’d later add para-cord between the gaps for extra protection

I also found some plain black drawer handles on eBay to use for the smaller speakers: 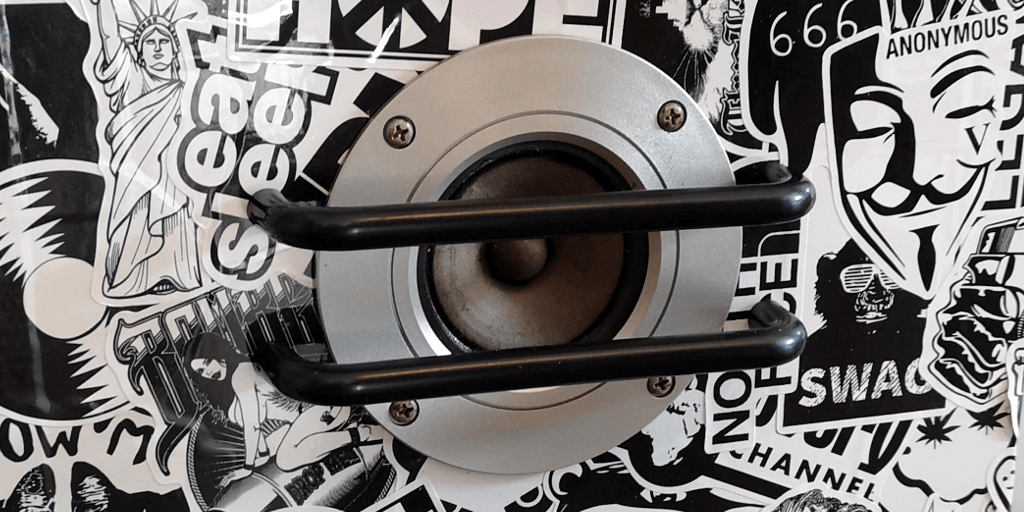 Drawer handles were the perfect size, and very cheap too

Whilst I was obsessing over making this thing a hard bastard, I also (very roughly) screwed on some metal corner protectors from eBay.

A final touch – some castor wheels on the side. “On the side?!” I hear you ask? This allows me to roll it when I need to, but when standing it can’t roll away or rattle as it’ll be on the rubber feet. Clever. 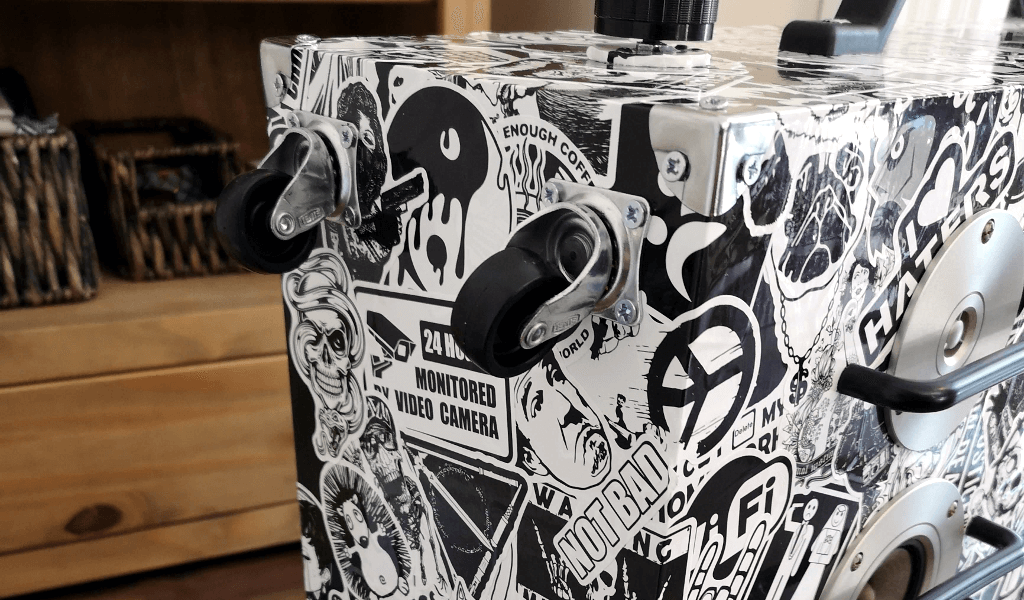 The wheels have come in very handy

I’ve been using this every week for months now and it’s still going strong. It’s laughed off any hits, stood up against our man-handling and pumped out our tunes without skipping a beat.

The team seem to love it too. I think they miss the speaker more than me when I can’t come to training. Pricks. 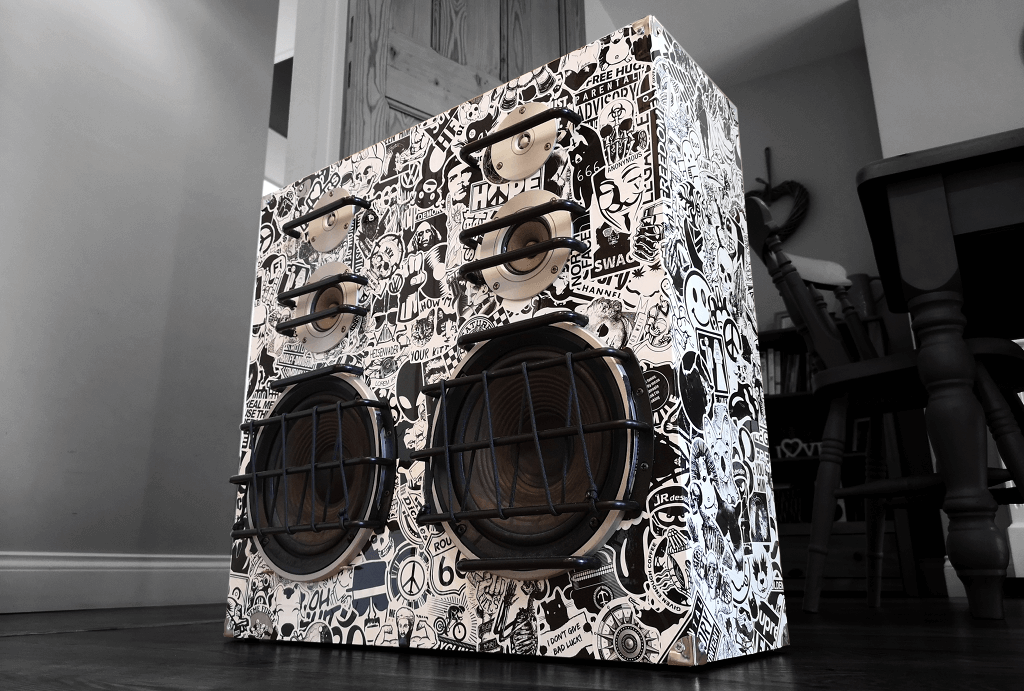 I hate that it’s now finished. Time to make another one?

It’s a bit of a lump to have to carry to each session but that’s probably the only downfall to this project. I’ll be adding a little pocket at the rear to protect my phone, but other than that it’s complete.

If you have any questions or want to ask anything about making your own, just comment below.

An Average Introduction to LiPo Batteries

How to Set Up an AdaFruit PiTFT for the Raspberry Pi

2 Comments on "A Maker Boombox"